A measure of the heat - I felt obliged to cover up bare arms before 10am!

We were following the Around Corby route from Mel Jarvis's book. To begin with all was sweetness and light, though the fact that I've walked the route before was helpful too. We had no problems as we headed out of East Carlton Park, and towards the path which runs along the bottom of the park. We turned left along this part of the Jurassic Way, then crossed the road to walk between the two fences and out into the fields. 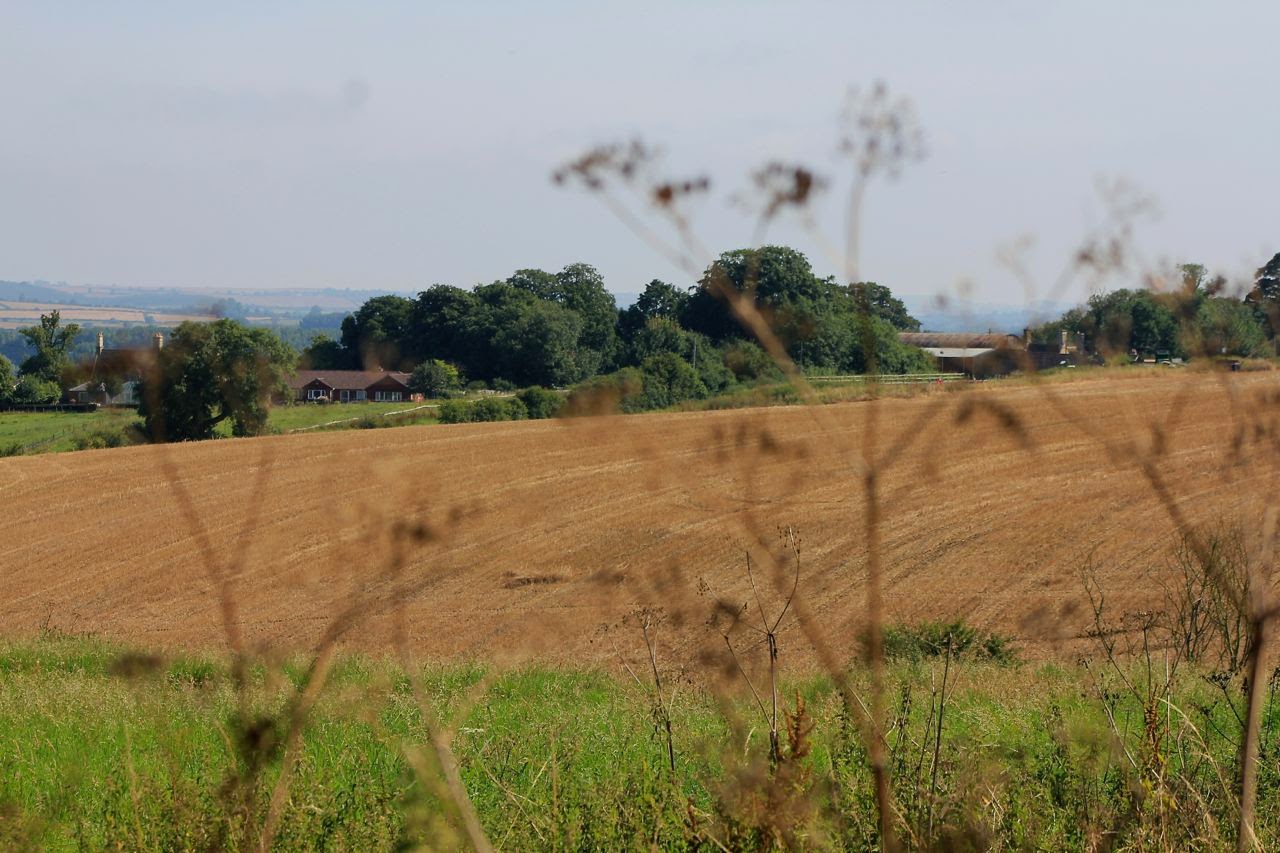 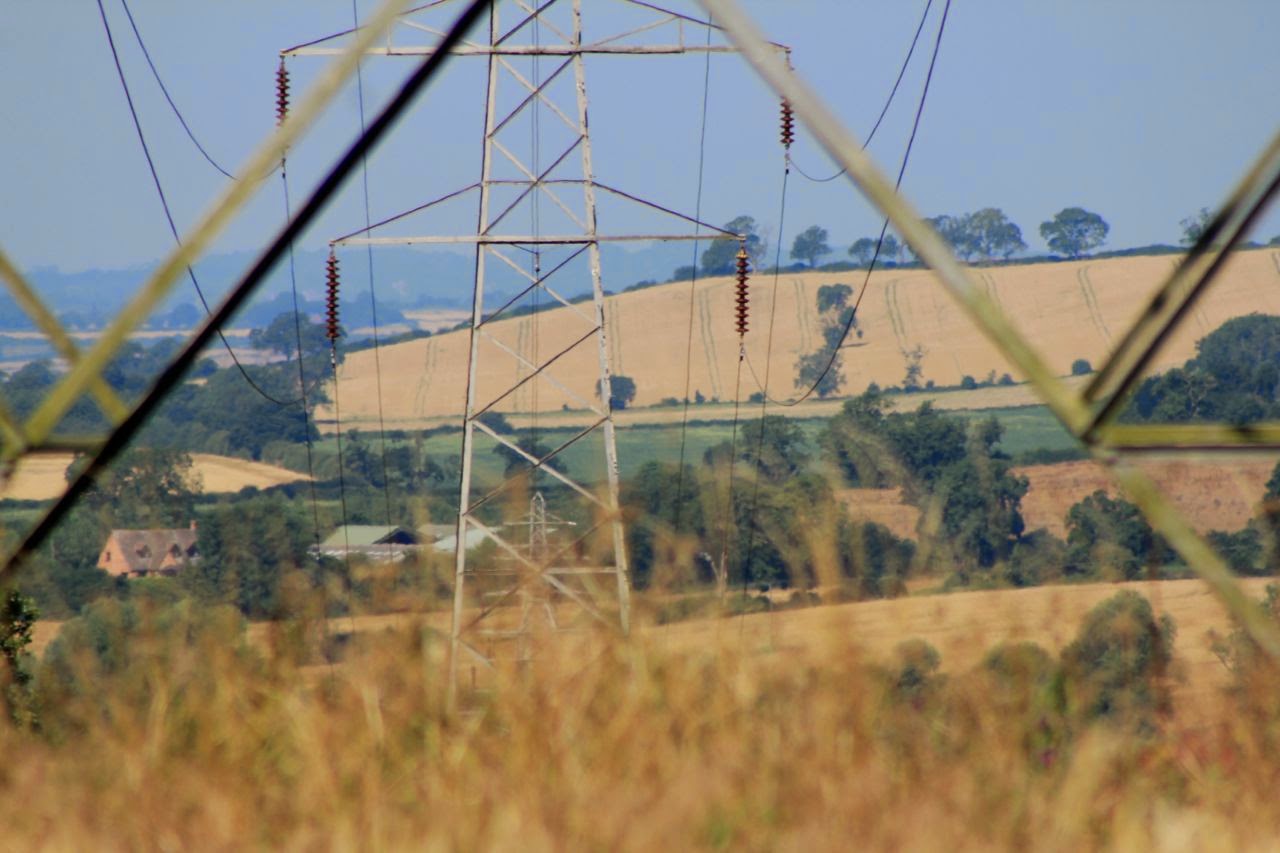 We followed the Jurassic Way to Wilbarston according to the directions in the book.  Then, when the Jurassic Way turns right at the crossroads near the Fox Inn, we continued to the bend in the road, turning left towards Springfield Farm. Facing the farm gate, there are two footpaths. We took the one through the farmyard, to our left.  We crossed one field, then took a gate on our left and followed the path diagonally uphill to a stile in the top right hand corner. 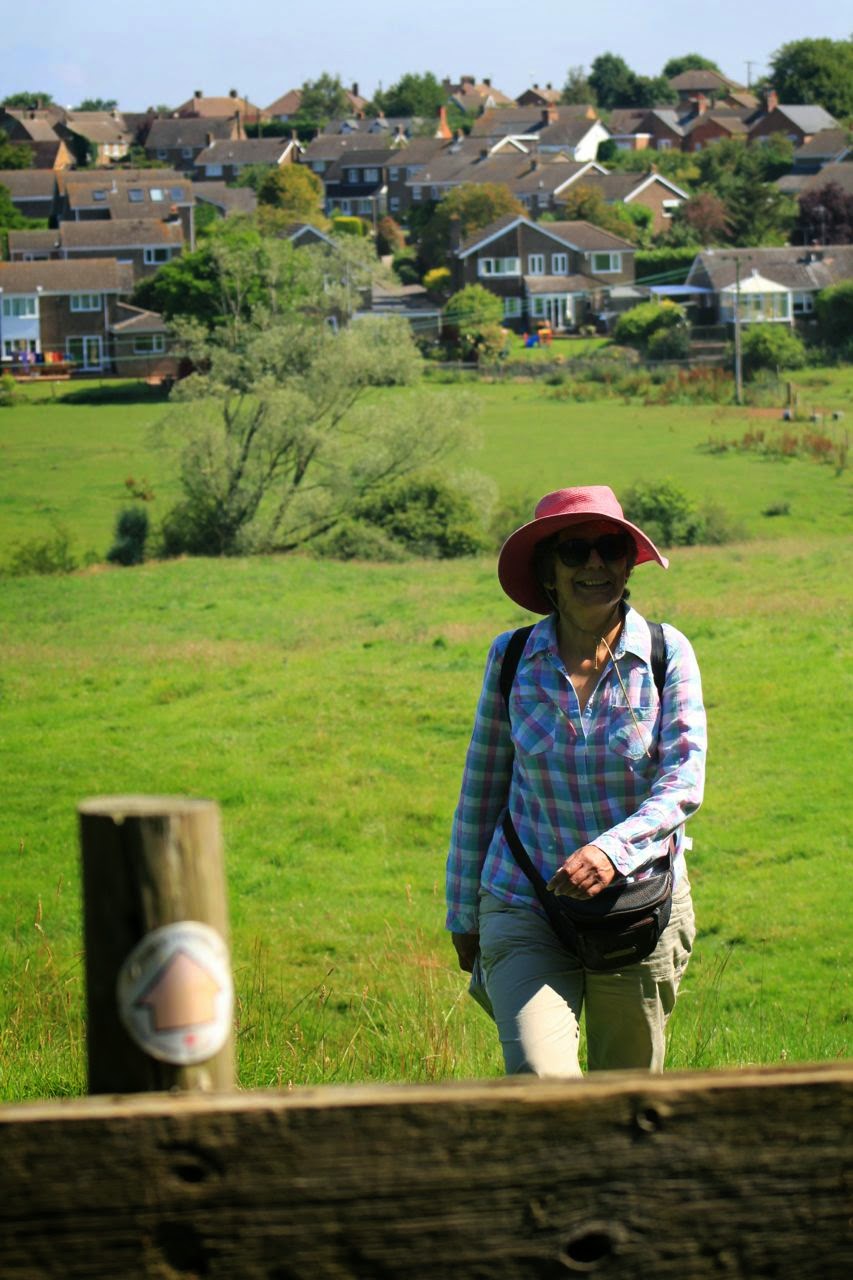 There is a gap in the hedge leading to steps which go down the embankment to the main Corby-Harborough Road. 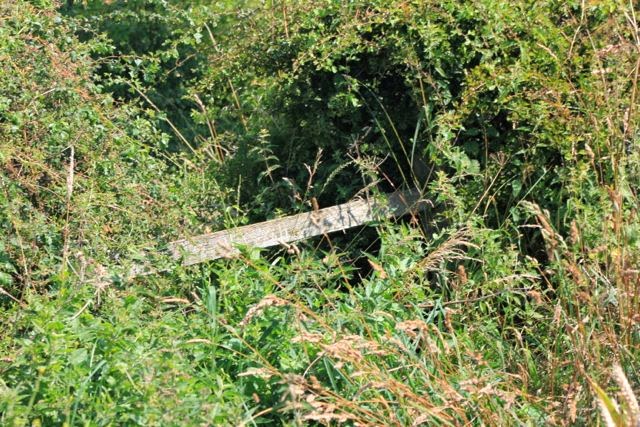 On the other side of the road, the path restarts slightly to our right.  The stile at the top of the steps is a little overgrown, but not as bad as some we meet later!  The paths through the fields towards Park Farm are mostly easy enough to follow. We crossed over the driveway then the path goes along the field boundary on the right of the buildings.  There's an opening in the hedge ahead, and then the path continues with the hedge on the right. 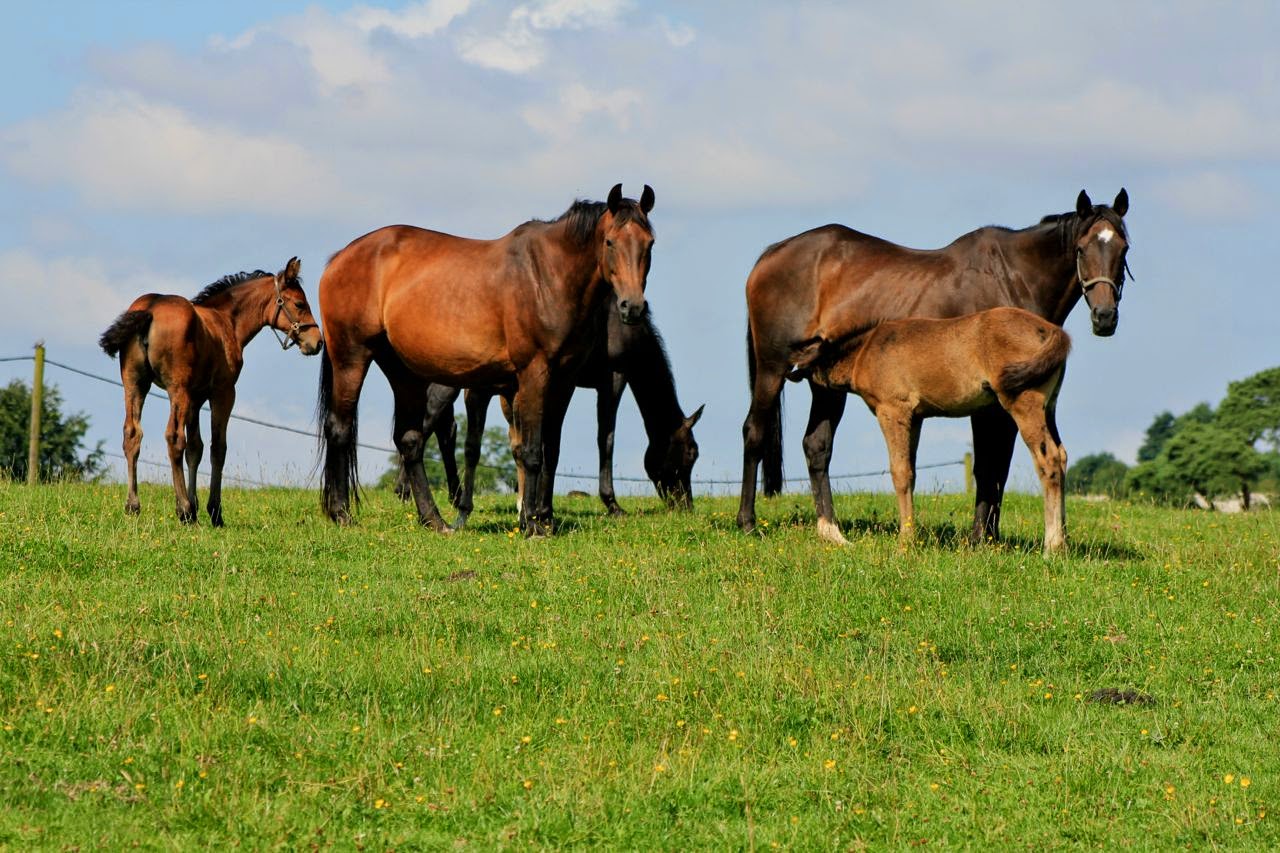 There is a wood on the right.  The path goes through the hedge and continues south across another field. On the other side of the field is the old airfield, now used for agriculture. We followed the perimeter track round to our left for about a mile, passing some large hangars, a weigh bridge, a bend in the track, a road to the left and another bend before turning left to walk through the wood (between Pipewell Wood and Little Haws Wood on the OS map. 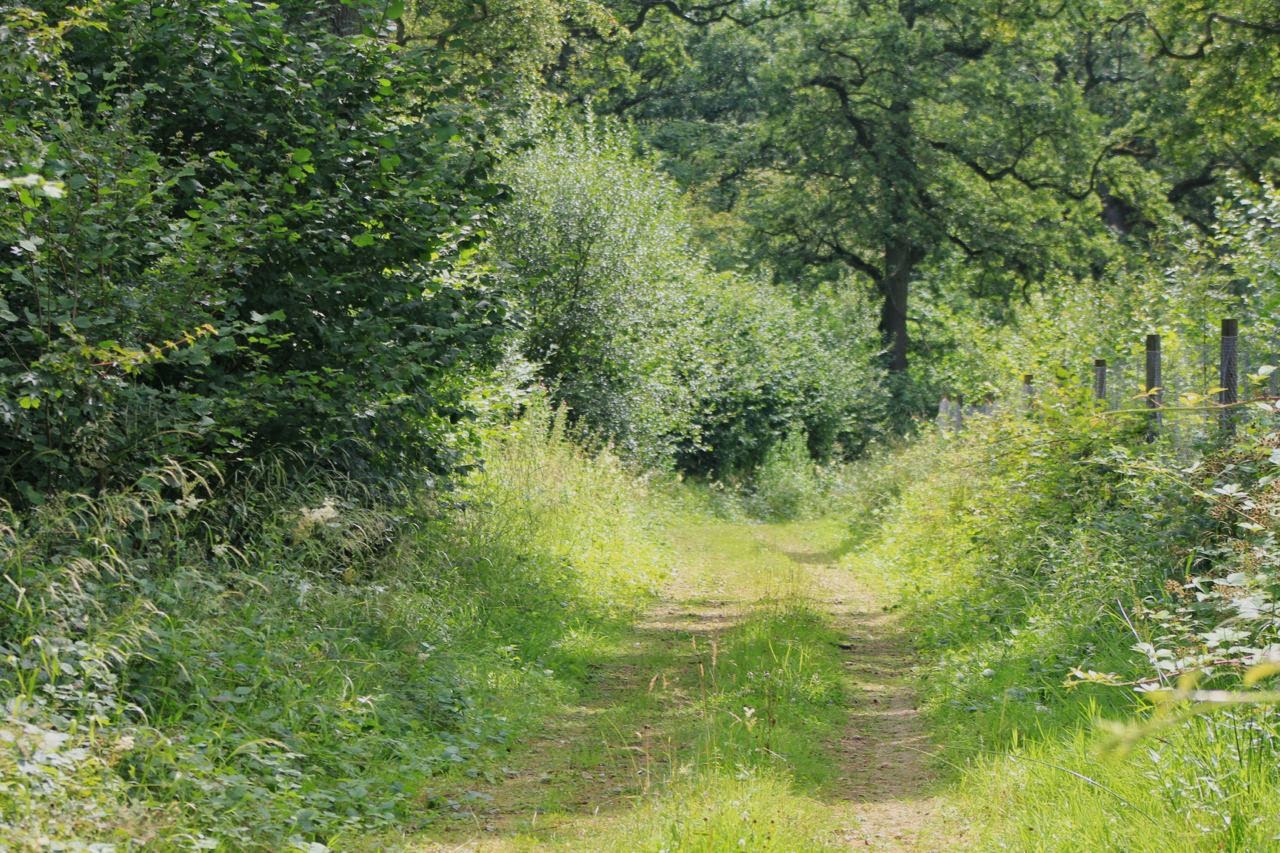 Once through the wood we turned left and followed the edge of the wood to Pipewell. 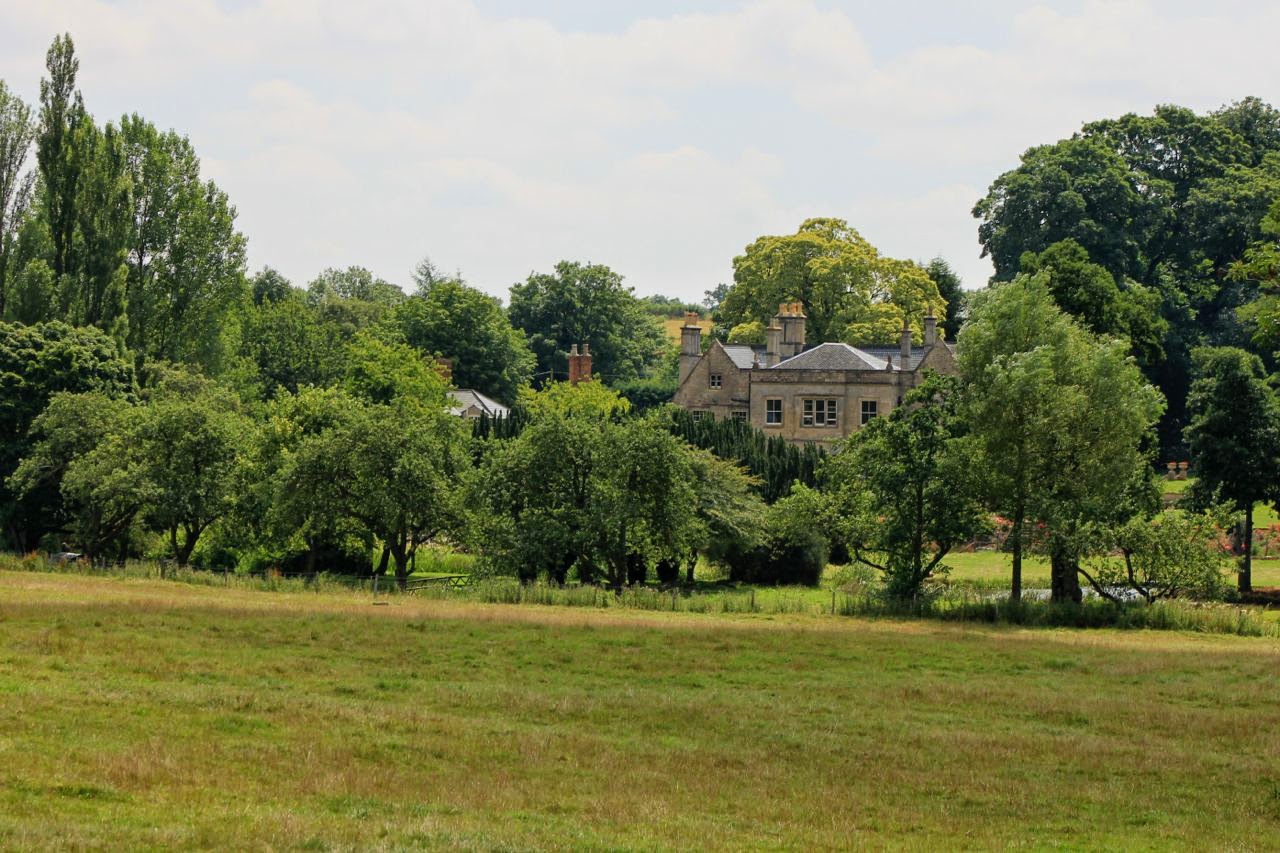 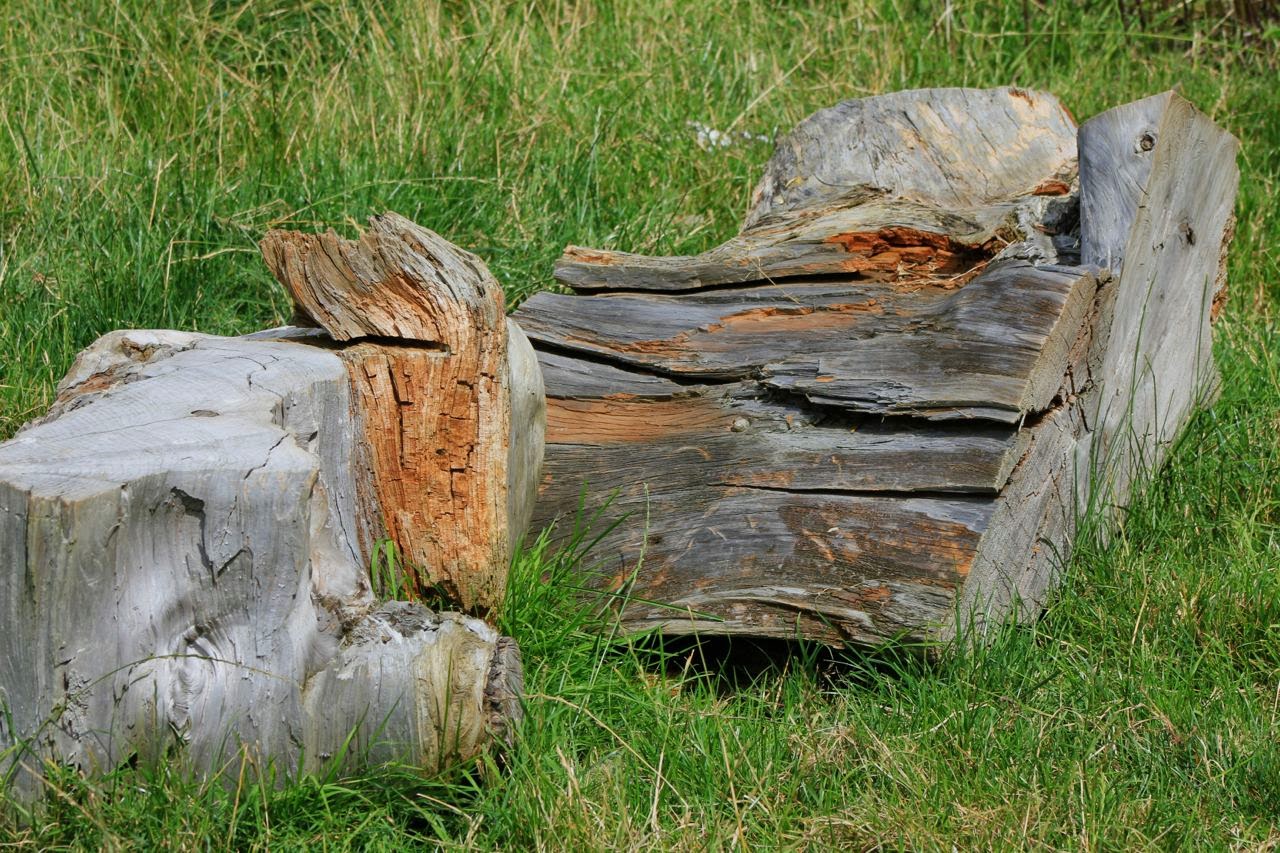 All went smoothly until we met the path out of the village and encountered "a small field that can in the season be badly overgrown with nettles". Luckily we hadn't decided on shorts today! It looked as though the path hadn't been walked for ages, though it is usually one of the routes for the Corby Walking Festival in May.  We did find the way-markers, but more by luck than judgement. 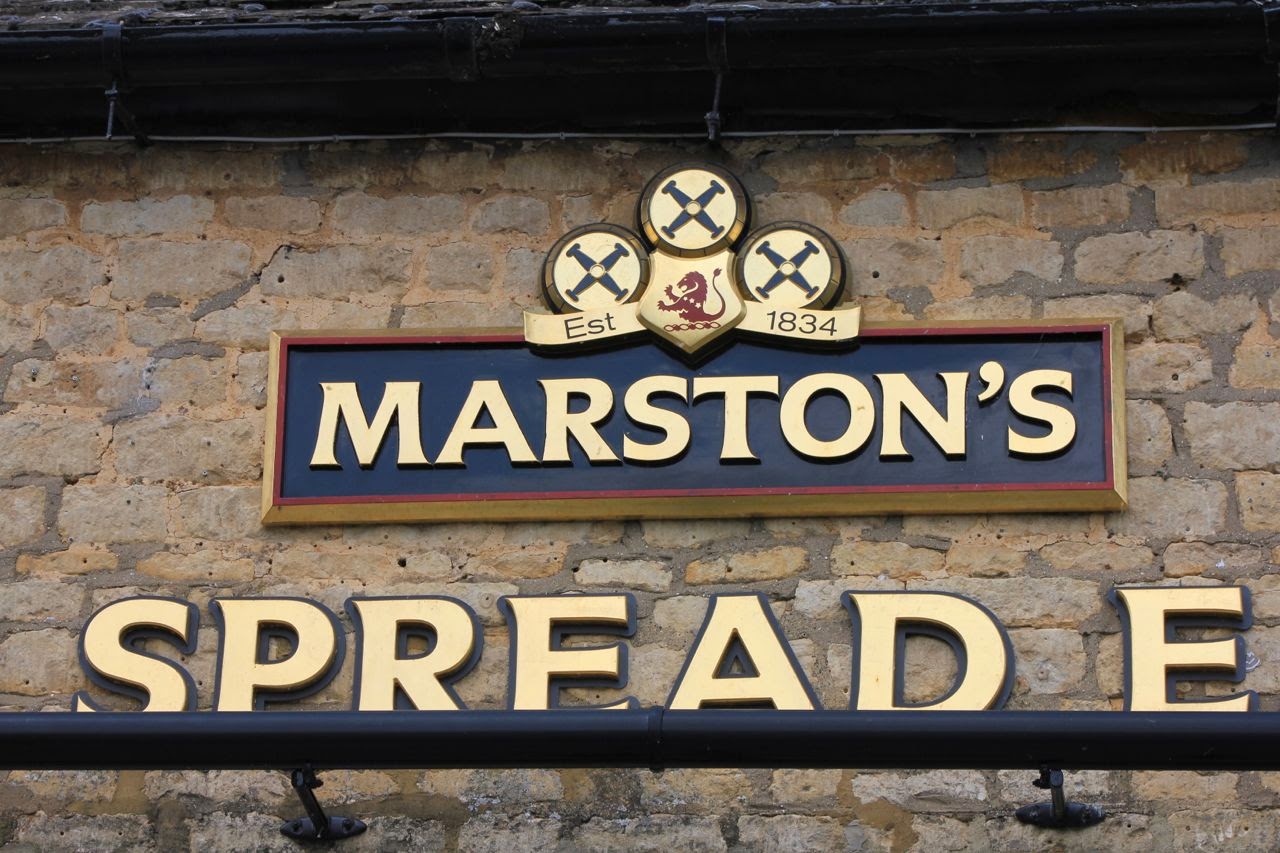 By the time we reached the Spread Eagle near Great Oakley we were ready for lunch. 1.30 must be after the rush - the sandwiches were good and service rapid. 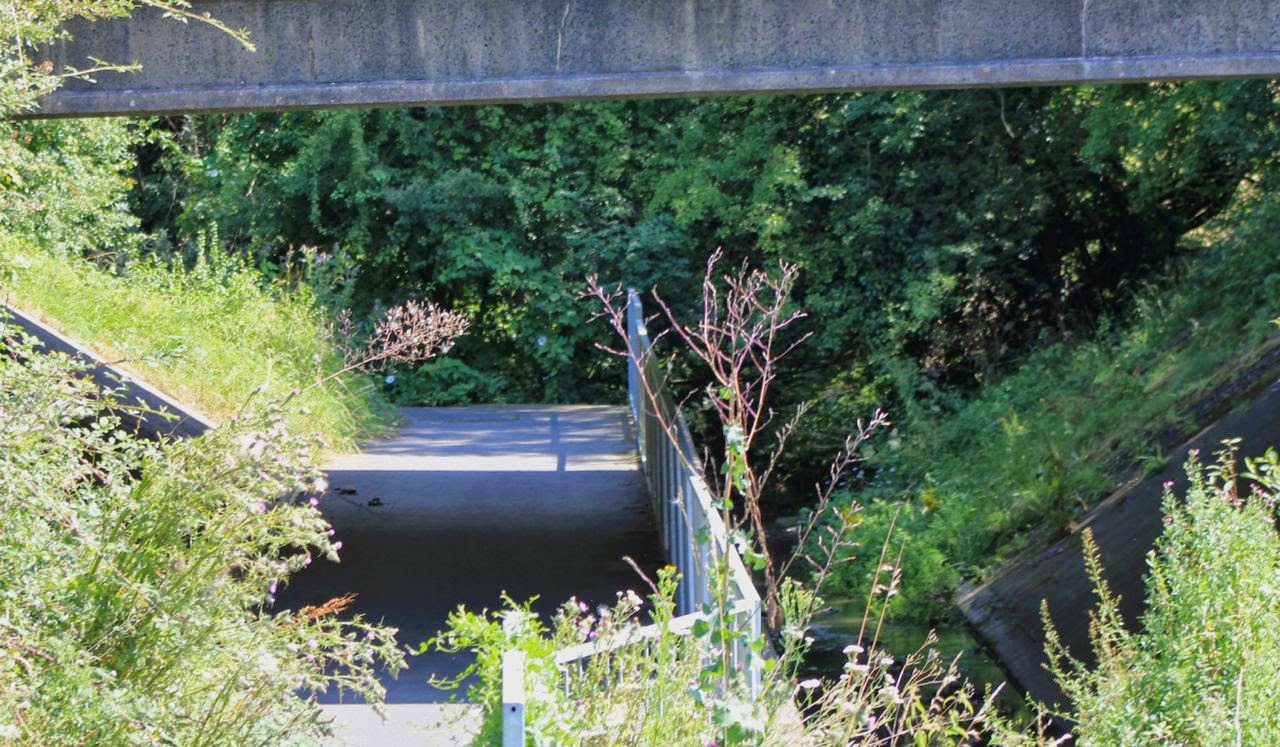 Our route was under the bridge along the footpath. We made the mistake of crossing the first road and taking the obvious path, and ended up in the playground. Just as well school holidays hadn't started yet.

A quick back-track and look at the book, and we realised we should have crossed the road and taken the footpath a little to the right of the brook!
This took us along to Woodlands Lane and eventually to a footpath with concrete surfacing leading uphill and to the old Station House. We followed the footpath across the field and under the railway.  Now that the new bypass road is in use it would be as well to turn right and walk along the road between Little Oakley and Great Oakley, then turn left along the road to Newton in order to use the road bridge. If as we did, you use the footpath, you have to detour back to the bridge in any case.

From here you find the footpath again and climb up to a plateau with a pylon at the top. There are several paths here, but we took the one leading southeast to the road between newton and Geddington. Our final stretch was along this minor road.

Map and details
Posted by aliqot at 12:24 PM

I was thinking 'how can you walk so far in this heat!' when, on checking, I realised we are about 10C warmer here at the moment! I bet it still took some going and admire your energy.

Nice pics - and love the photo of you on the swing. Your new profile pic?

I think it was around 26-27 C. I drank loads more water than I usually do! And when we finished we had a cold drink and a cup of tea before we could think of moving. . .
I can rarely resist swings!

Riding on a swing indeed, its the girl in you.{:))
RAF Deenethorpe was a wartime USAAF bomber base.
Marta looks cool as a cucumber.

Thanks, Roy. I regress to childhood when there are swings 'n' things.