Thu, 2015 Jul 2 9:43 AM BST
With Gordon. Weather cloudy, very warm - though nothing like yesterday's high temperature. Good underfoot. Something over 8 miles.

This is adapted from a walk written up by Christopher Somerville.
We started from Fotheringhay, not Elton, and had to divert just after Elton because the footbridge over the Nene has been declared unsafe, since June 25th.

Our original plan was to drive through Fotheringhay to begin at Elton, but we'd chosen one of the three days when the road through the village was being resurfaced. Quick change of plan. 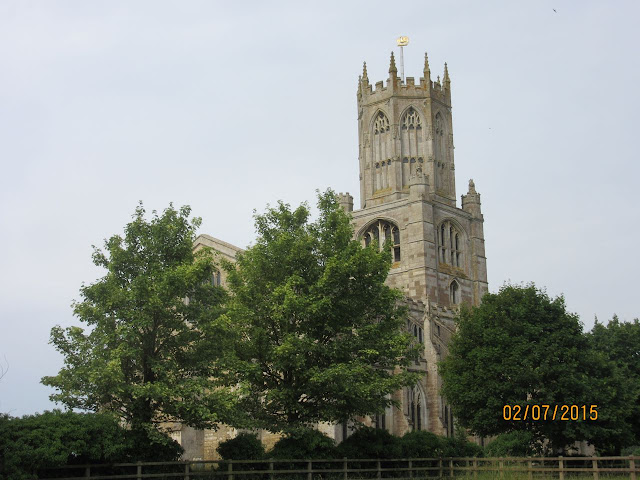 We walked through Fotheringhay, past the church and the Falcon pub, and a plaque to Richard III, who was born in the Castle in 1452. 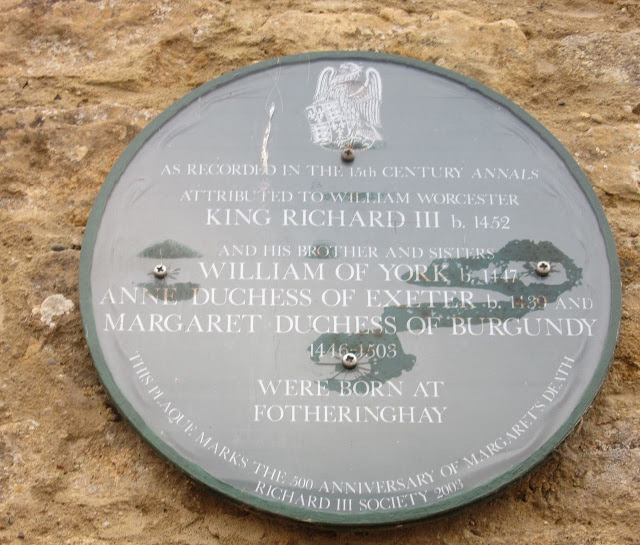 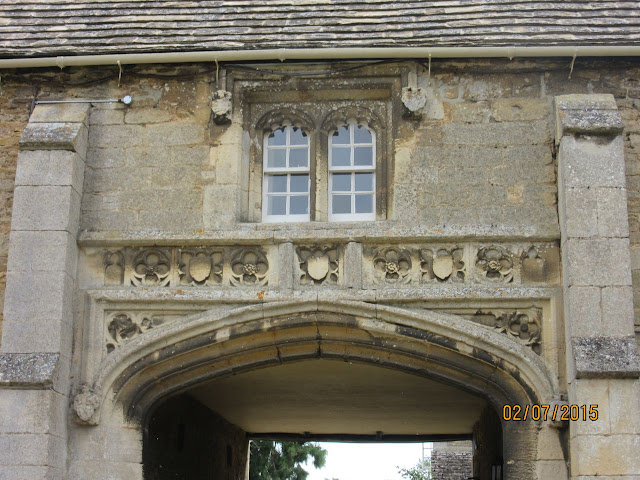 The Nene Way footpath took us past the Castle Mound, 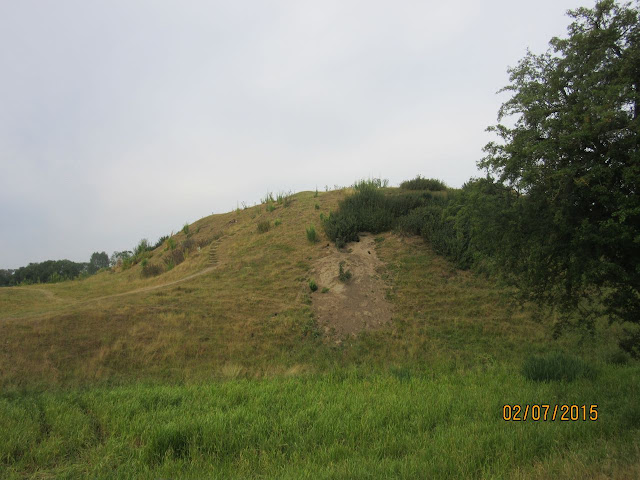 and its memorial plaque to Richard, 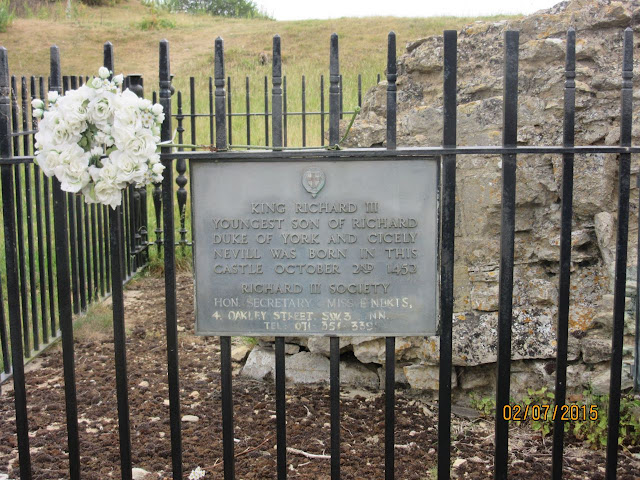 and to Mary Stuart who was executed here. 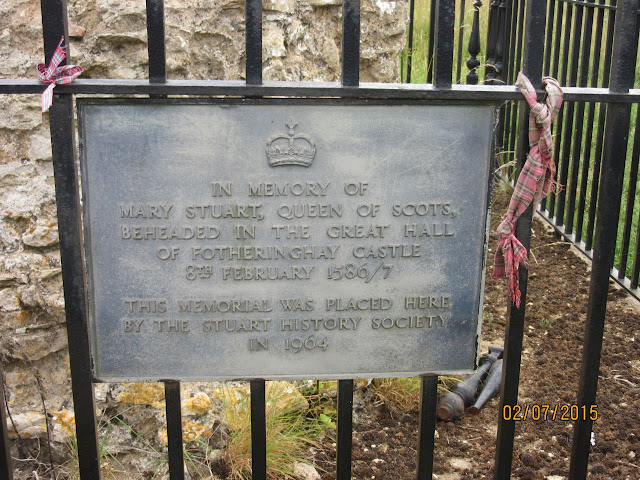 We had a quick look at these and the river before continuing along the Nene Way. 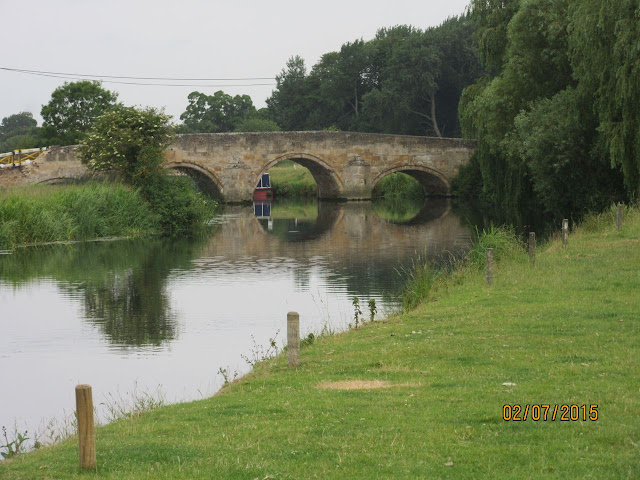 The path is easy to follow over fields and a dismantled railway, a footbridge over a lock, another footbridge, and past Elton Boat Club moorings, near Eaglethorpe Mill. 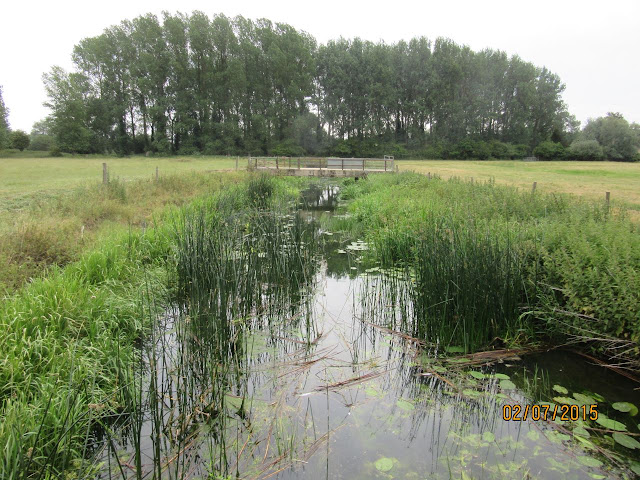 Our route took us under the A605, ignoring the bridleway on our left. Next time, I will probably choose the bridleway, though Eaglethorpe is an attractive village.  In Eaglethorpe we met the road and turned to the left. Just after a right hand bend we found the footpath
sign indicating our path to the left. At this point we should have turned right after the kissing gate, and over a stile, then left between the fence and the polytunnels. We arrived there by an unofficial and more tricky route. After a few hundred meters there's a left turn through a kissing gate, leading down to the A605, which has to be crossed. . .patience . . .

On the other side we turned right then through two kissing gates - there is a warning about heavy plant - no, not Triffids. The path took us across Elton Park, from where we caught a glimpse of Elton Hall, and crossed a field of curious cows. Over a stream and on through Elton Park lands to the road in Elton (Chapel Lane). At the end we turned left to the village green, where a handy bench provided a good stopping place.
We walked along Duck Street, past the Crown Inn 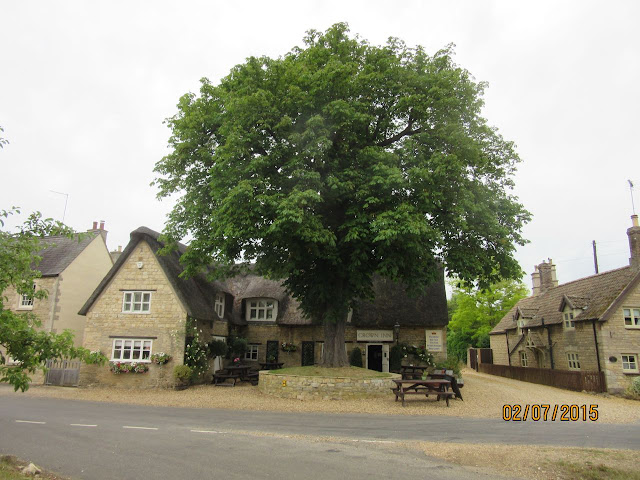 and Duck Cottage, followed by Waddle End - not sure if that's a duck skeleton in the window though. 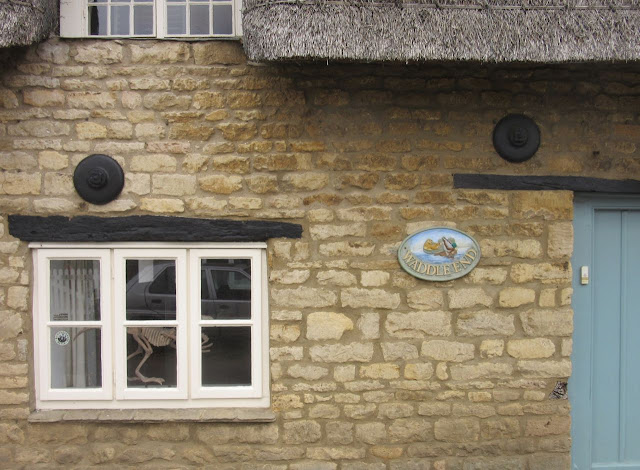 Before we left Elton we passed these sheep - at first glance I was taken in. 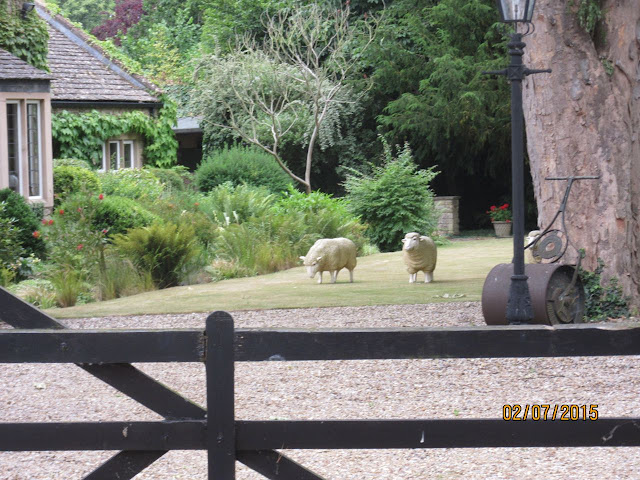 When the road bent to the left we took the track signed to Yarwell Mill and Silson, and then a footpath left after 200 meters. Luckily there were people around who informed us that the bridge we were intending to cross was closed, and suggested an alternative route.

We returned to the road, and turned right, away from Elton, and over Elton Bridge. Shortly after the bridge, on our left was a gap and a rather overgrown path down towards the river.
There was soon a turn to the left, which went under the bridge, alongside the Nene. It joined a towpath/footpath along the river, past various moorings and boats. We rejoined our planned path at the bridge, which has been declared unsafe. 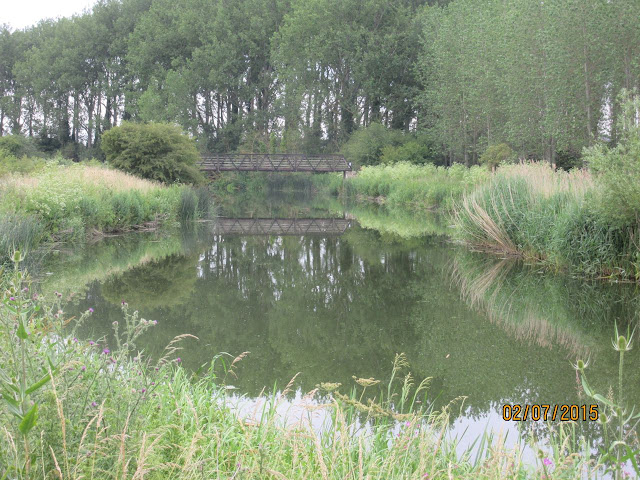 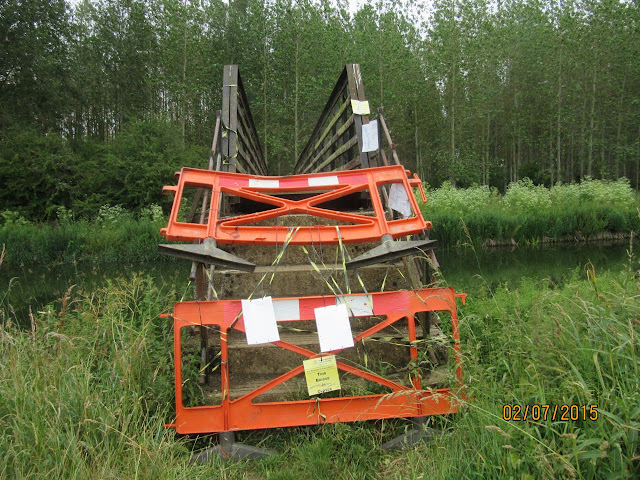 We continued along the edge of the river, then turned off to our left, crossing the field diagonally, and then the dismantled railway, and the next field.  This one had a good crop of rape, which was tough going today. 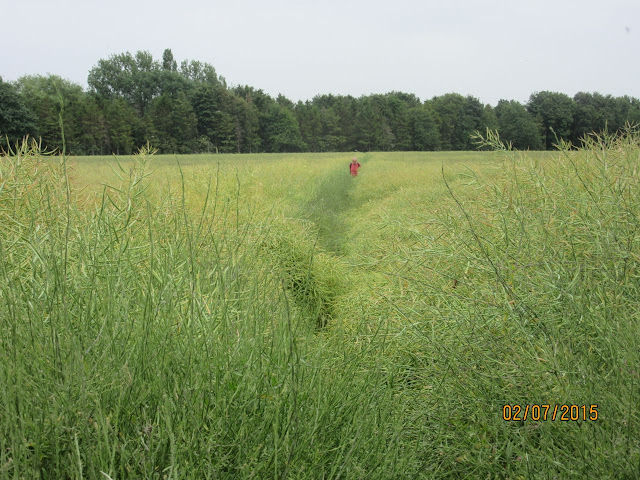 At the end of this field we went through a gap in a hedge and turned right along the field edge. Another gap in the hedge and the path followed the right hand edges of two fields.
We could see Nassington church spire which helped confirm the direction. We came out on the edge of Nassington, and turned left to take the Nene Way footpath past the cricket ground and pre-school.
We followed the Nene Way (at some distance from the river) past Park Spinney, then crossed a bridge over the Willow Brook. Plenty of fish swimming in it. 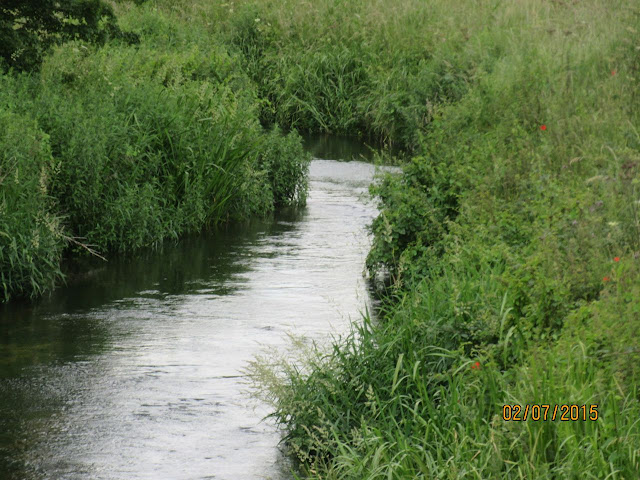 At Walcot Lodge and Model Cottages the track joins a minor road, turning left and leading us back toward Fotheringhay and the car.

A fair amount of insect life today, particularly butterflies, mostly of the darkish brown variety, though saw a few red admirals too. Lots of damselflies. An excellent view of a red kite helping itself to roadkill as we were driving back.
Map and details
Posted by aliqot at 10:51 PM

There's always something to ensure that a walk isn't routine!