Not a day promising a great deal - grey, a bit damp, no frost, and the prospect of some mud. But we went out anyway, starting fromthe car park in Burghley Park. We admired the building once more and the fallow deer, and made our way downhill to the main entrance gate. A right turn took us along the recently made footpath separated from the road by a thick hedge, and after about a mile we went through a gap and crossed the road  just opposite the drive to The Dingle. This can be tricky as the road bends here and traffic is not slow

We took the right hand path, but followed the edge of the field round to the railway crossing in the far corner.  This is a fairly quiet line, and the crossing is well surfaced. Our route took us to the road between Uffington and Barnack, along a raised bank and then to our left over the road bridge. 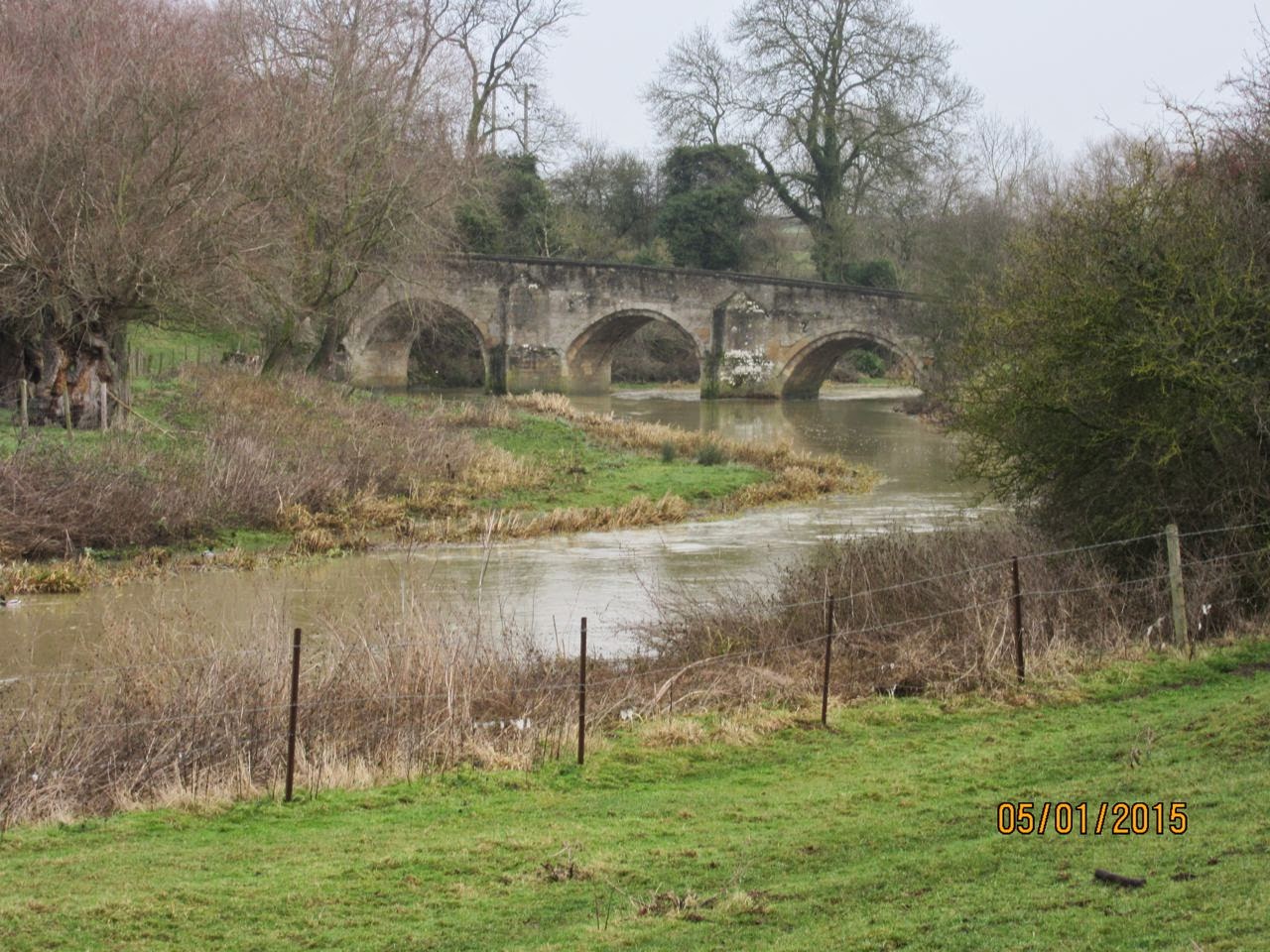 Shortly after the bridge we took a marked path to our left which follows the route of the disused Stamford or Welland Canal. The Canal was in use between 1673 and 1863, but then failed because of competition from the railways. The canal bed is now a wildlife corridor. 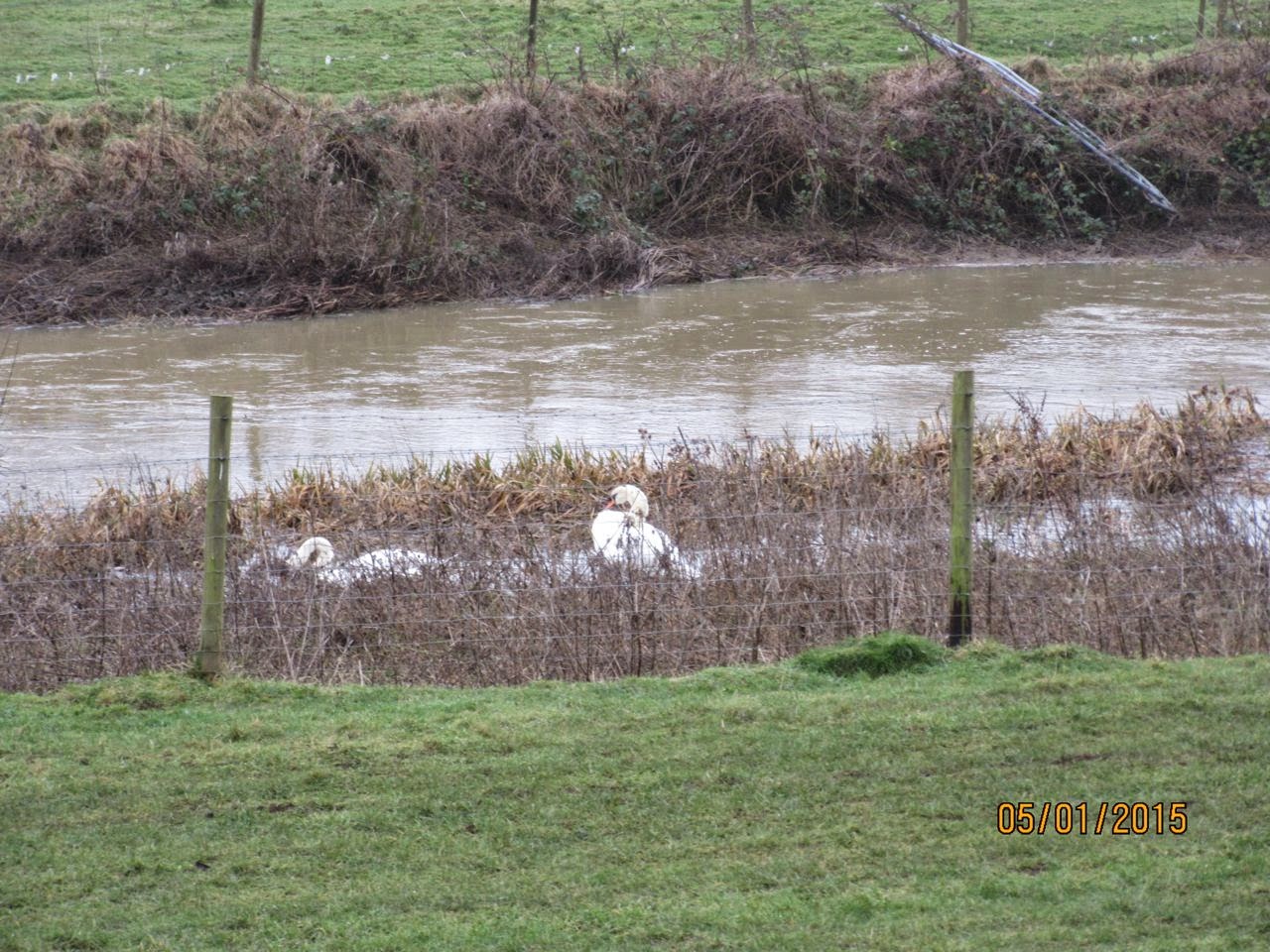 The path is clearly marked and runs alongside the old canal, with views of the Welland to the south. Pretty full at present. 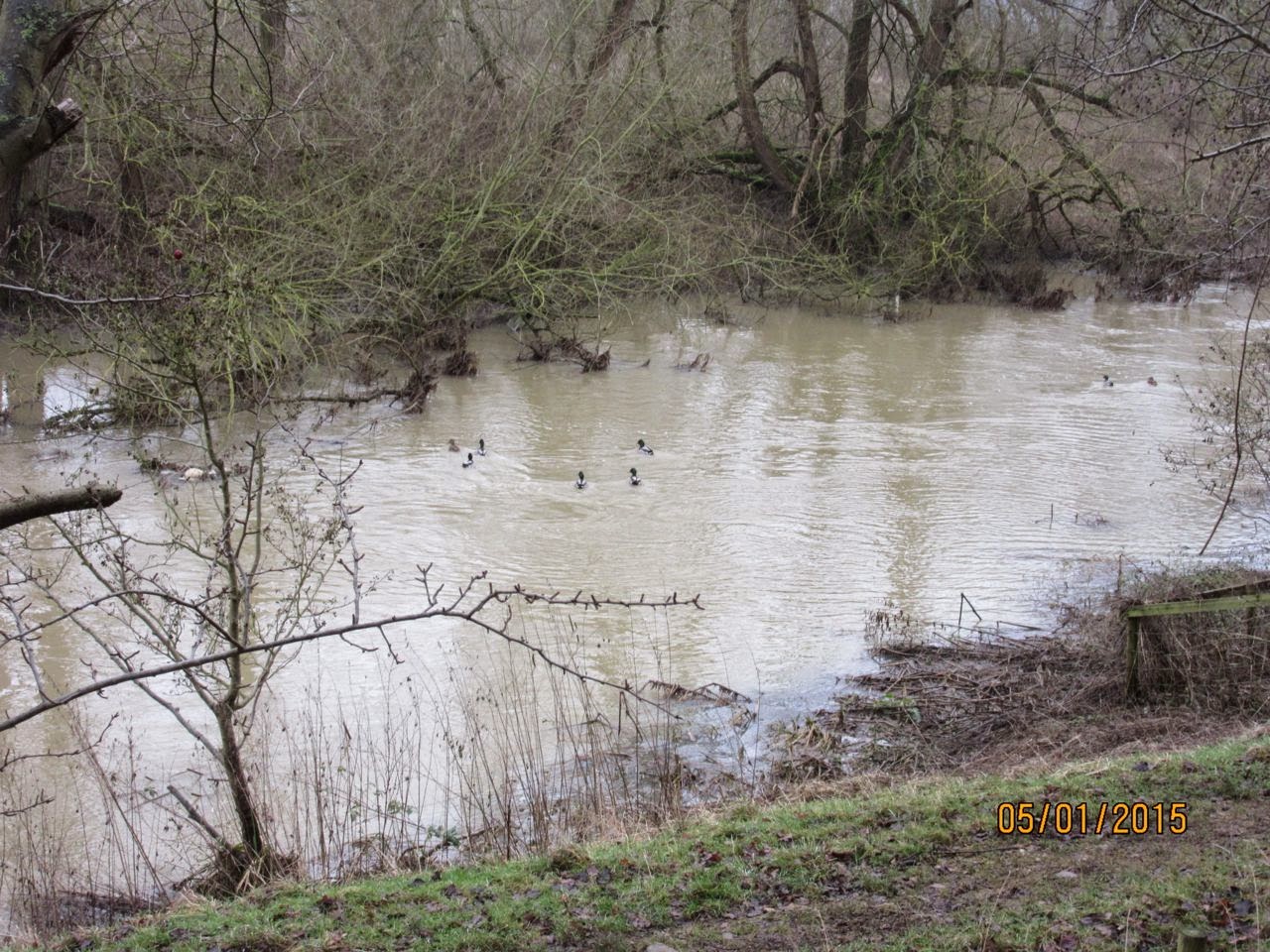 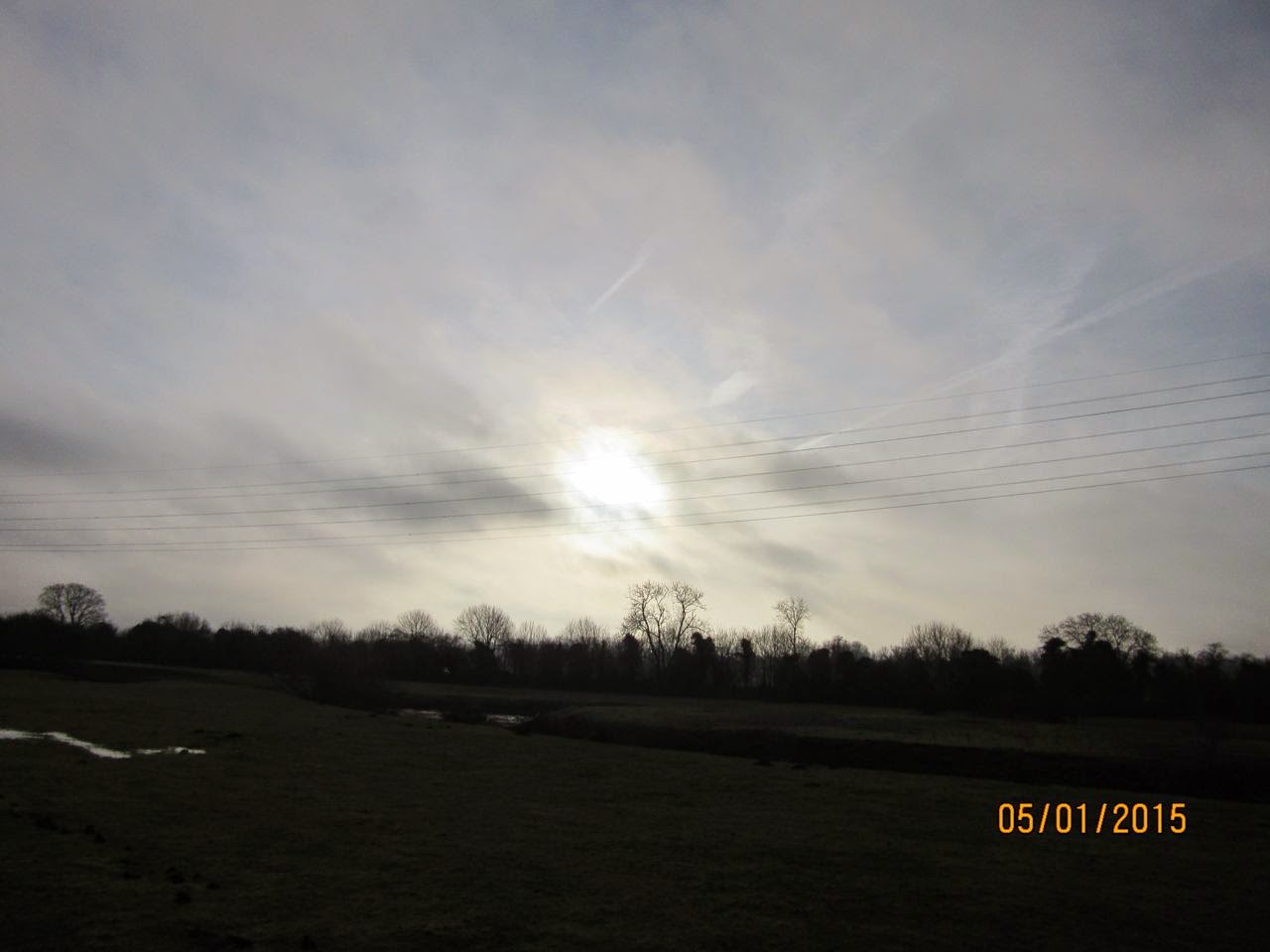 As our path turned left over a footbridge there were signs of shadows on the ground and a strange object shining in the sky.  Reflections in the water, and the world was brightening up. We walked over a field, full of fieldfares, to the Mill. 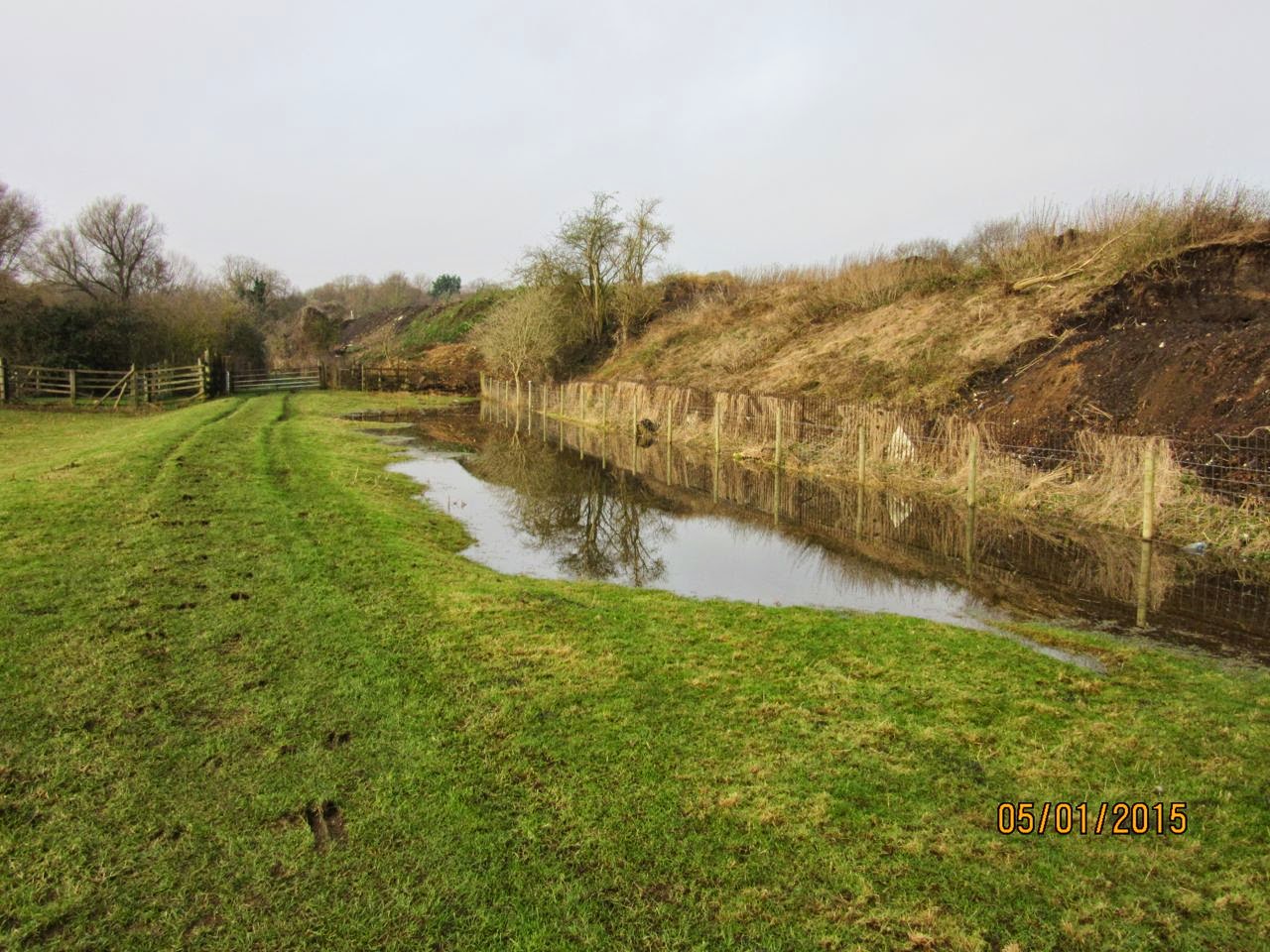 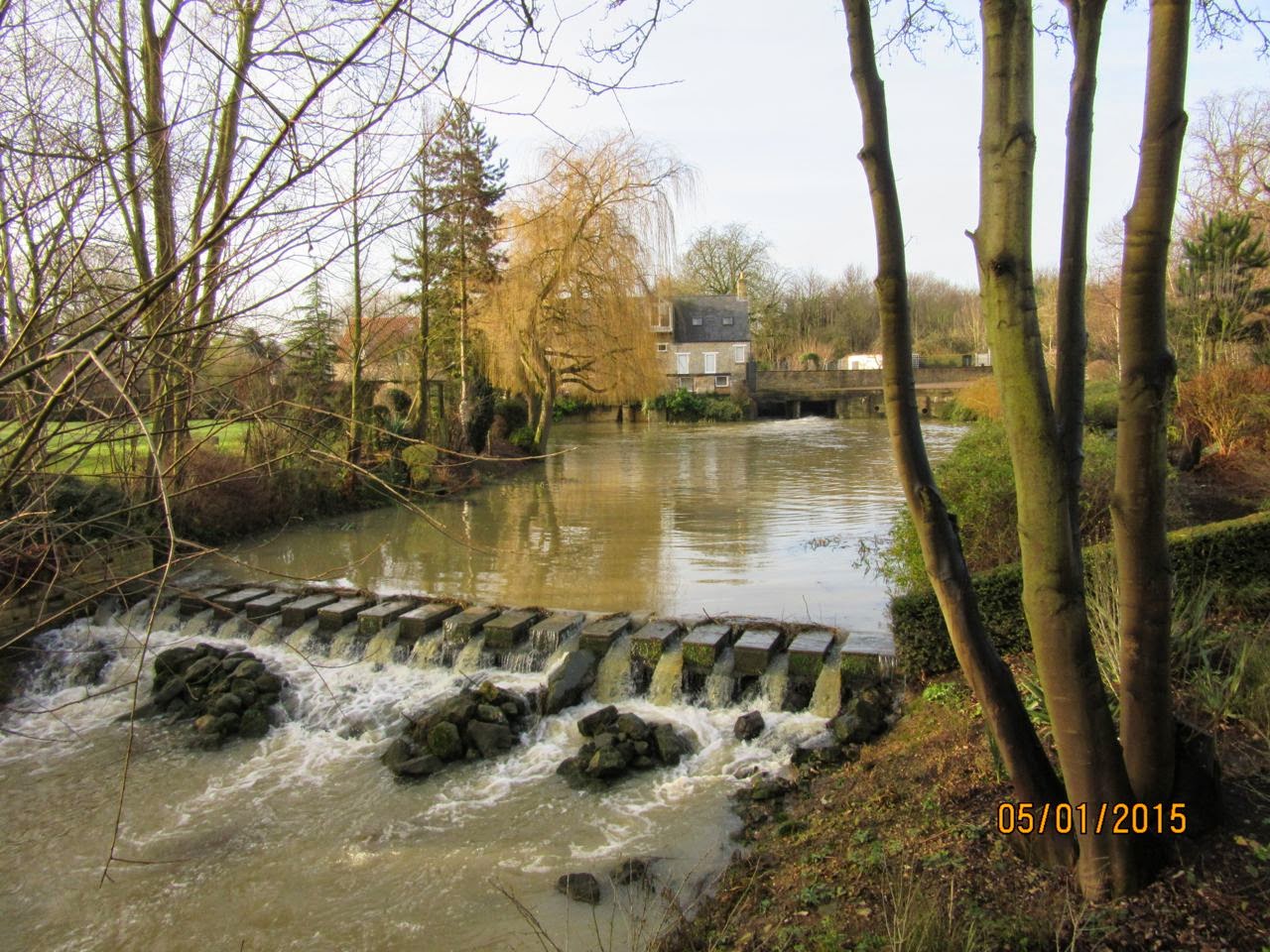 This is now in large landscaped grounds. We stopped to chat to a knowledgeable man with two dogs - he claims he sees kingfisher and green woodpecker here most days. We were not so lucky, though we took a diversion along the river as far as the weir. 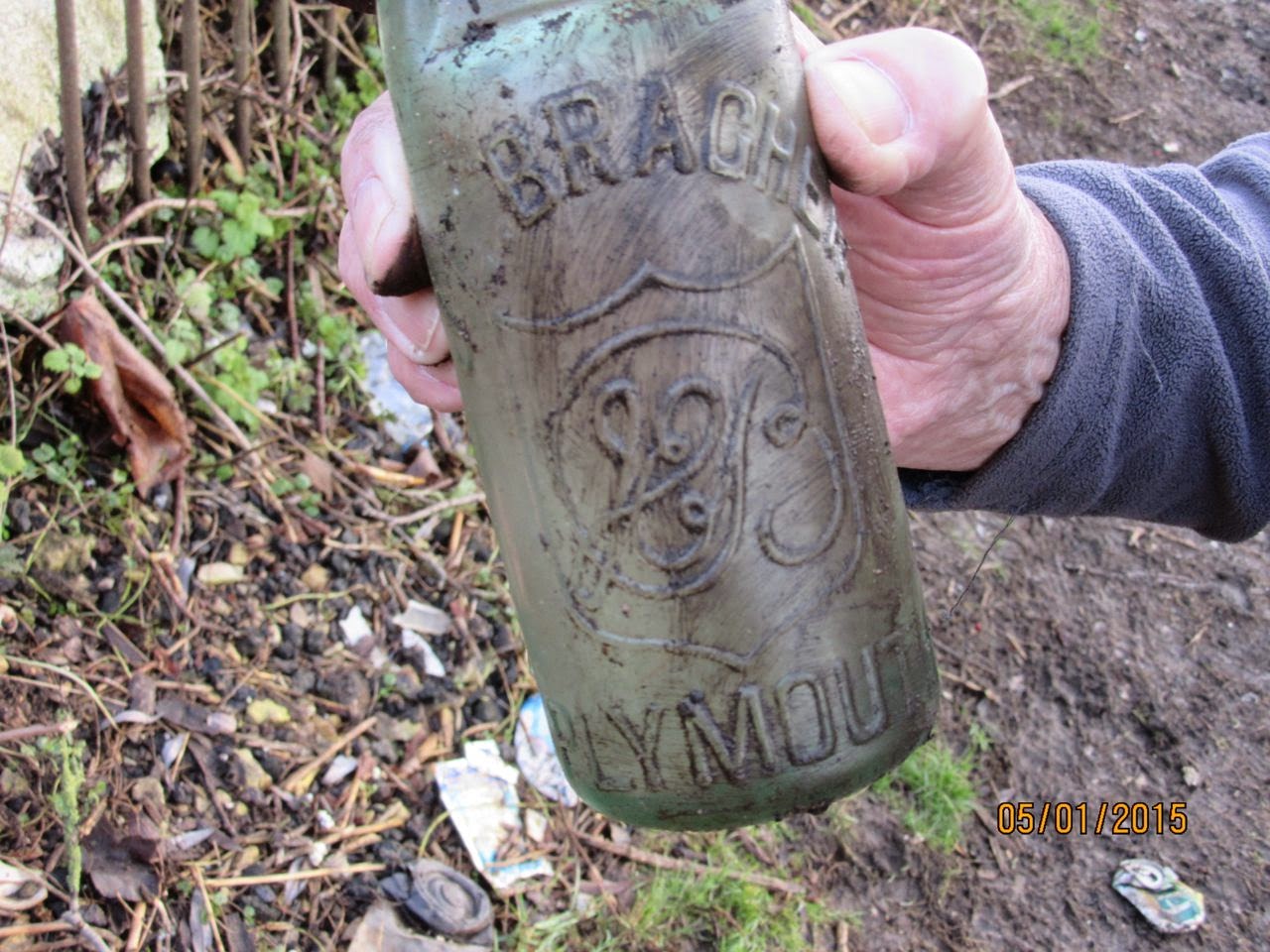 Near the mill house there is a large bank of earth being attacked by mechanical diggers. Once the sewage works, and previously a tip full of antique bottles, it will no doubt soon be built over. 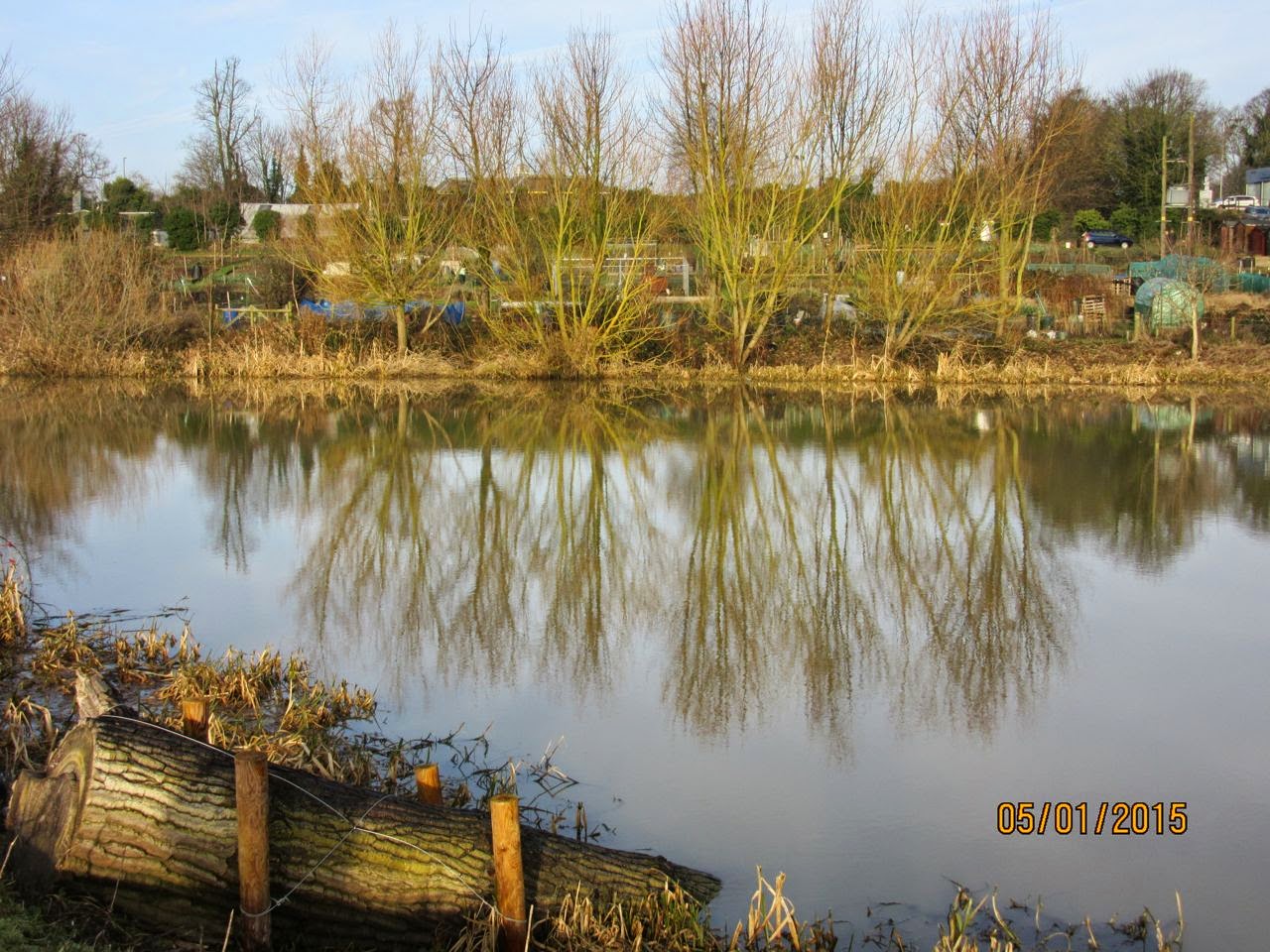 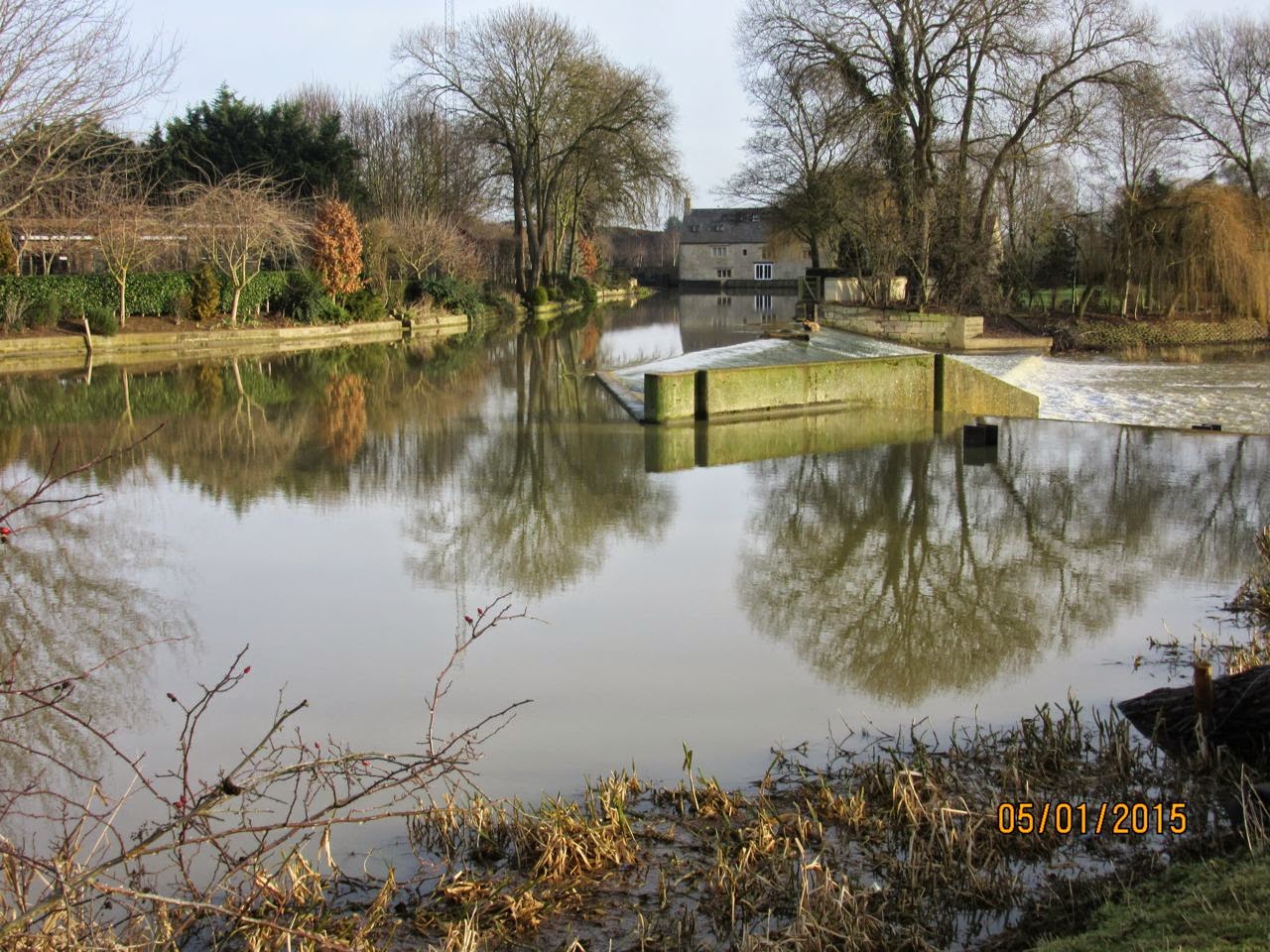 The two photographs above were taken near the stop where we set down our foam bum-protectors and had a break in the pleasant sunshine. Then we walked back and up to the Uffington Road, near Morrisons and took Priory Road into Stamford, then made our way down Water Lane to the footbridge, and back into Burghley Park. 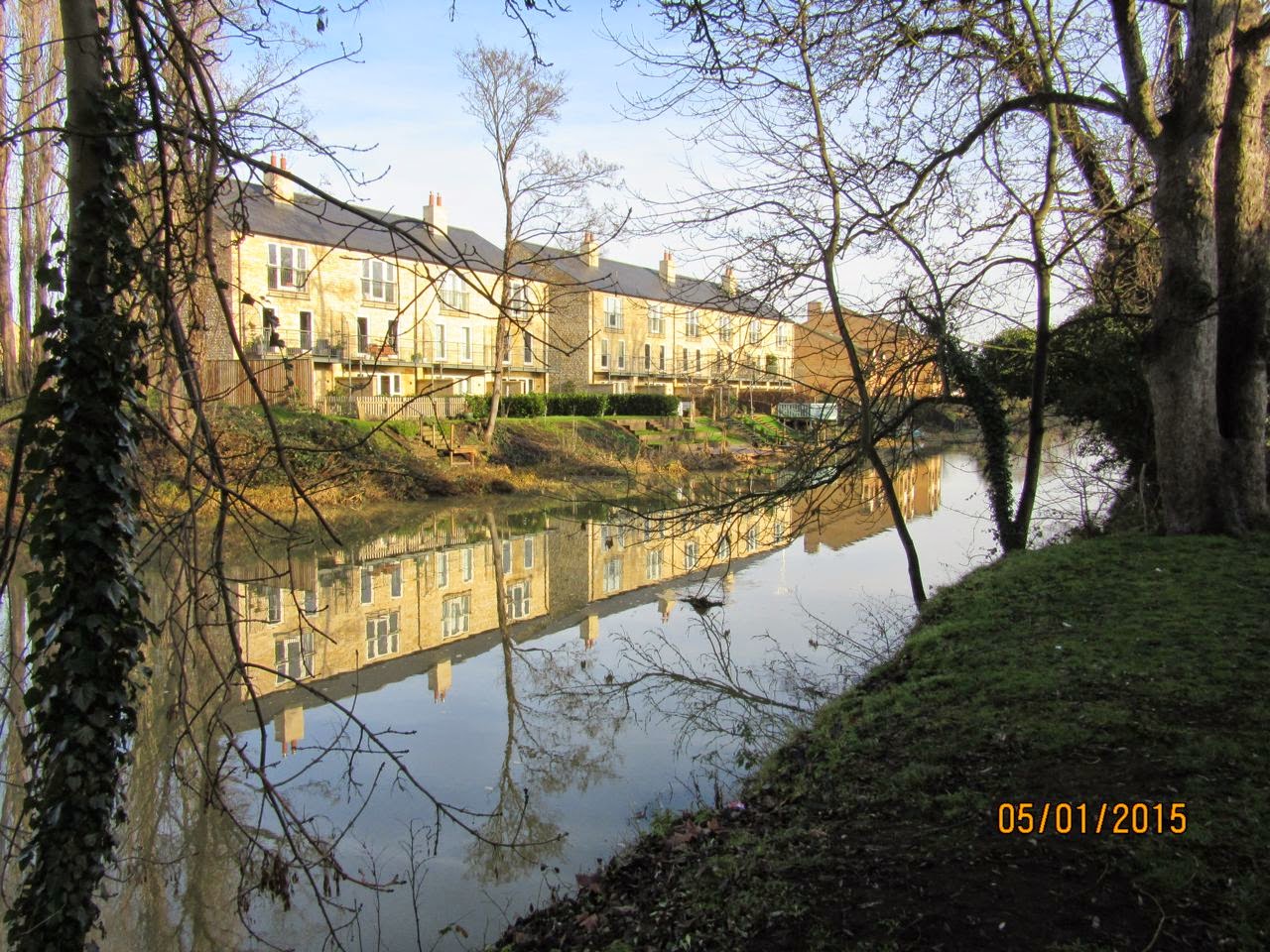 Map and details
Posted by aliqot at 3:30 PM

What a difference sunshine makes! reflections on the water make the scenes magical. We had frost and fog here but, out of the valleys, the sun shone here too and we found some of it which was lovely. The descriptions of your walks are clear and the photos bring the areas to life.

Not only does the sun bring all the colours to life, it lifts everyone's mood too!