( Garmin timer got switched off for a while, hence 'mile 6 to 7'  is at least two and a half miles long, and doesn't track the route at all between Achurch and just above Wigsthorpe.  After checking the route on the OS map the missing section is almost three miles. Total has to be about 12 miles.)


12 miles approx. Sunny, and very warm. As far as the walk is superb – after that there is too much road and flat open track, though Barnwell village itself is well worth a walk.

We set off from near the Woolpack Inn, walking through the , which is very attractive, especially in the bright sunshine.  We went past Islip House and after a gentle walk uphill turned right to the road through the village with the church on our left. 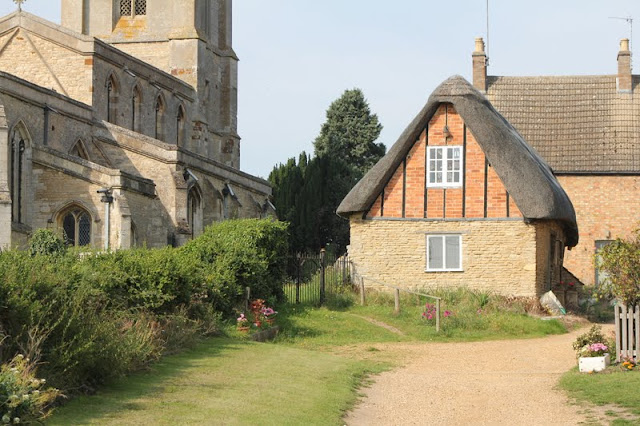 A little past the church on the right-hand side of the High Street, at the Rose and Crown the path goes through the pub yard and through two fields which are beautifully maintained with a pond and trees. 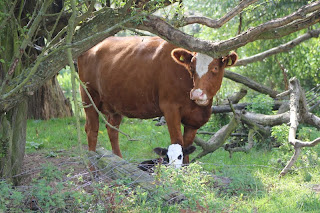 Then we arrived close to Islip Mill, where we crossed the lane into a meadow where cows were grazing.  Close to the path in some trees was a cow with a very young calf.

Further on the path goes through a spinney and by the edge of a small lake, and continues into Titchmarsh Local Nature Reserve. 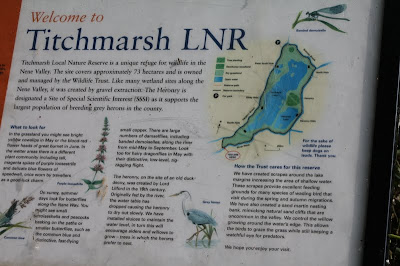 We stopped for a few minutes in the bird hide, to watch a few grebe and swans. And later, to look at some black and brown sheep with wonderful horns. 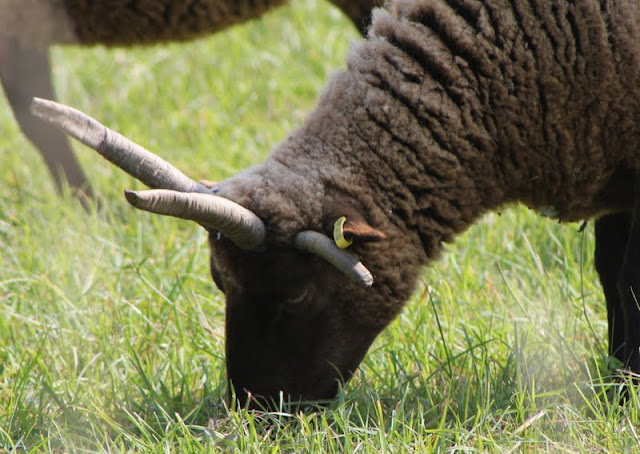 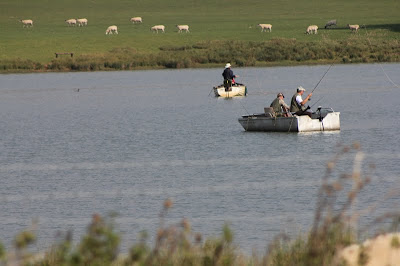 The , clearly marked, leads between two lakes.
To the left of the path there is a trout fishery - very popular when we walked past.


The leaves the Nature reserve after another notice board to make its way across a couple of fields and to the main street of Aldwincle. 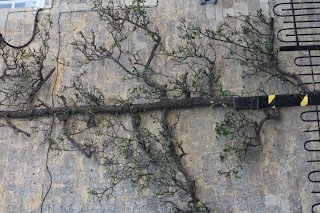 I’d heard of the Tea Shop at Pear Tree Farm, and we spent a pleasant half hour sitting outside at the back. Decking that felt right, since it was over a yard, colourful flowers in pots.


We sat at a table with a parasol, in glorious sunshine, watching a horse-rider leaving the stables, and lots of swallows flying in and out of the barn, and sitting on the tiled roofs . . . almost .
Oh, the coffee was good too.

Still, this was a walk!  So we set off again, past the village school, and the church until we found the footpath sign off to the right.
The path leads downhill slightly and turns left following the edge of two or three fields, behind the recreation ground. We went downhill slightly at the edge of a small wood and continued, not far from the river, but mostly hidden from it by trees – we could hear and catch the odd glimpse of people, boating and paddling in the river.

We made a small (deliberate) diversion to the church which sits on a hill above the Wadenhoe .


We looked inside, and found plenty of information about Wadenhoe past and present, including the true story about Thomas Welch Hunt, at the time the owner of Wadenhoe Manor,  and Charlotte Isham.  They had been married for ten months and were touring when they were shot by brigands at . They are buried in the English cemetery in Naples, but there is a large remembrance plaque just inside the church door.  The church also displays copies of paintings of the couple, and the story behind the paintings, which are in Peterborough Art Gallery

We walked through the village, down the hill past the millennium sundial, past the village hall, the Kings Head pub, and followed the signs over a bridge near the mill. The weather was hot and the water very clear and almost tempting. 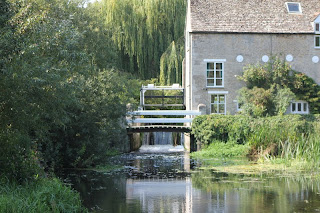 After the footbridge we walked beside the river for a short distance, and in the next field had to walk diagonally across to another footbridge. Wow, people sunbathing!  Once we were over the Nene we turned left and slightly uphill making directly for Achurch church.  The path goes through the churchyard and a shady spot next to a wall with lots of crab apple trees looked ideal for a banana stop. 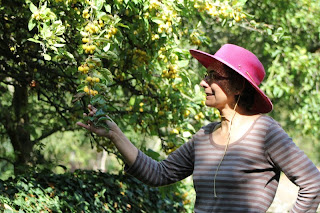 Marta recreates a pose found in some old photographs of her mother and aunts – from the 1940s?
We turned right past the church and briefly along a small road, until we saw the sign pointing to the left into some woodland called the Linches.  The path is clear and comes out on the road near .  We followed the road past a junction opposite Lilford Hall gatehouses, which are small but quite ornate. 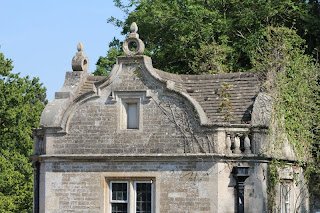 There is a mile or so of road walking here, over the roundabout with the busy A605, past wide arable fields. 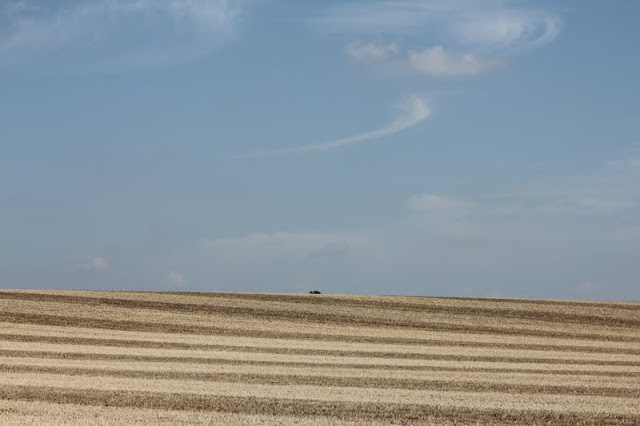 We had the field on our left and could see Titchmarsh church in the distance on our right. 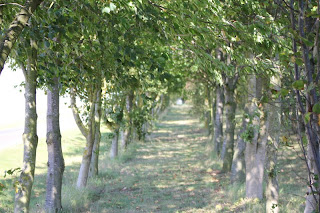 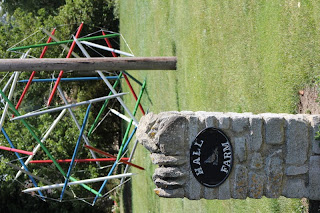 The path was clearly signed here and leads over the fields to Barnwell.  It emerges at the remaining part of All Saints Church with its graveyard, and a spectacular spooky tree. 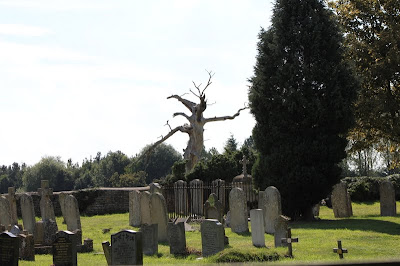 The village is very attractive with the brook running through.

This bridge was built for the former Duke of Gloucester to walk from the Manor to church. 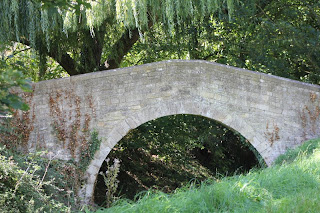 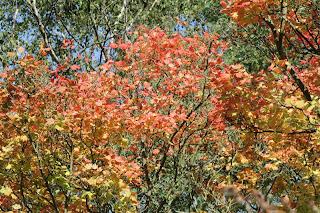 We walked through the village and turned right along the at a road junction, then left through a scrubby spinney to the Oundle bypass, which we crossed, then continued to the old road.  We followed this – about a mile again - past Oundle Mill and lock and back to the country park.
I couldn't believe the colours in this tree - we are barely in September. 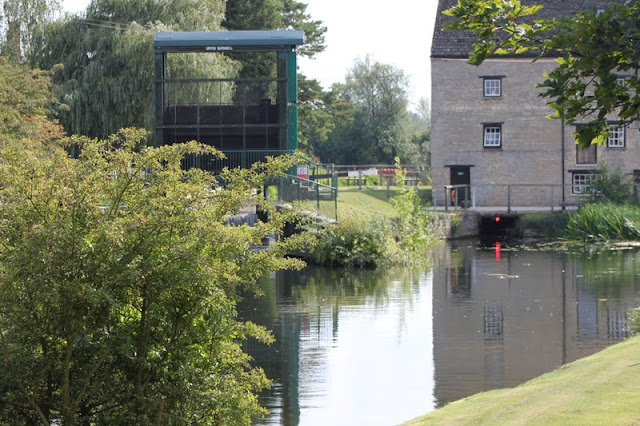 
Pictures from a walk covering some of the same ground:
Posted by aliqot at 5:43 PM

Sounds and looks lovely. Favourite pictures the sheep, (it IS a sheep, isn't it?!) the spooky tree (get the halloween cards into production) and the harvested field which is very striking.
Echoes of New England in the colourful tree (or should that be colorful?).

Thanks for the feedback! Yes, it was certainly a sheep! And I think the blue sky added to the New England effect in the pic of the autumn (already. . .) tree. All it needs is one of those white New England houses.

I've just had another look at this after a January walk covering some of the walk - Aldwincle to Islip - Jan 23rd 2012. Ah, we had a summer!