Monday 06 November, 9.30 am.  With Maureen and Eddie.  Beautiful weather today., after the early frost had melted.  10.78 miles.
Same route as last Thursday.

Along Exton Road, opposite Church Street.  Take second footpath on the right, by a bench.
Keep the woodland on your left, then cut across the field to a stile, and diagonally across the next field. Continue in the same direction and go downhill towards Horn Spinney. There's a stile with a gap beside it, then walk through the spinney and over a real stile. 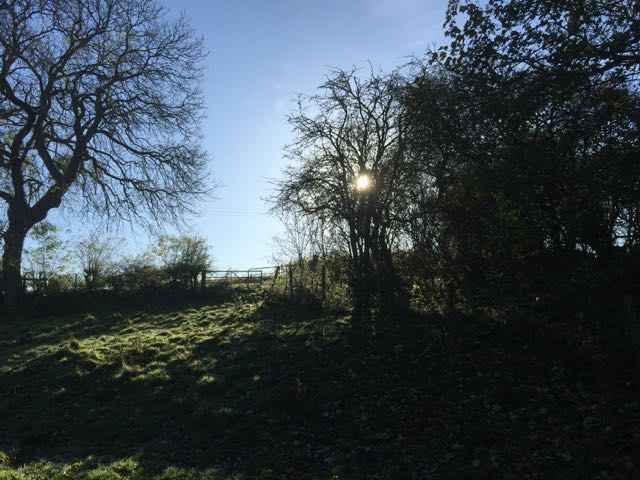 The path climbs the shoulder of the hill then down and over a ladder-style stile to the road opposite Horn Mill. Turn left and walk up to the next footpath which goes off to the right.  As we pass the trout hatchery we see the trees of Pug's Park Spinney to the right.

Follow the path, and climb the stile, head for the bridge over North Brook, walk with Pug's Park Spinney on your right, the gradually downhill toward Lower Lake and Fort Henry Lake.

Take the path to the right of this lake and follow it through woodland and alongside arable land until you reach a flight of steps.
Turn left along an estate road. When the road bends to the left, your path continues straight ahead. After about a mile it meets the Viking Way at a T-junction. Turn left and head south west (with a few dog-legs) , following the Viking Way alongside Tunneley Wood, past the private RC Cemetery and into Exton village.

Today we took the road on the left which goes past the present school (Exton and Greetham), then turns into a footpath which takes a slightly roundabout route to the junction with the road to Empingham.

Cross the road on to the well-marked footpath to Whitwell. This comes out in the car park behind the Noel Arms. Cross the A606 and take the footpath up past cottages and the church, then follow the road to Whitwell car park on Rutland Water.

Worth a coffee stop!  Then we followed the waterside path round to Sykes Lane, pausing to admire The Great Tower, which I always want to call Symphony in C, probably because of the words on the plaque! Hmm. 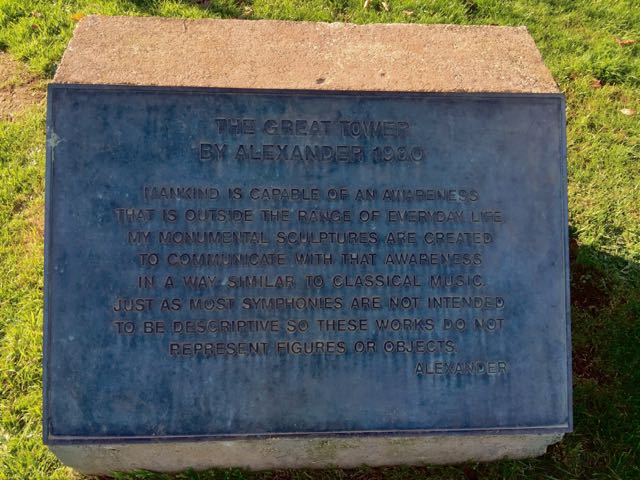 The great tower
by Alexander 1980

Mankind is capable of an awareness
that is outside the range of everyday life.
My monumental sculptures are created
to communicate with that awareness
in a way similar to classical music
just as most symphonies are not intended
to be descriptive so these works do not
represent figures or objects

Alexander
We had a look at the beach - not very sandy, or very tempting in the cold weather though.
Then we followed the footpath from the near end of the dam alongside the fence, across a field and through the wood back into the village of Empingham.
Posted by aliqot at 5:17 PM

Brilliant blue morning, as it was here!

The sunshine must have lifted your spirits as well as your feet! A lovely record of your walk.

Thank you, Ida - we really enjoyed it.