With Marta. Just under 10 miles. Wet all day, muddy underfoot in places. 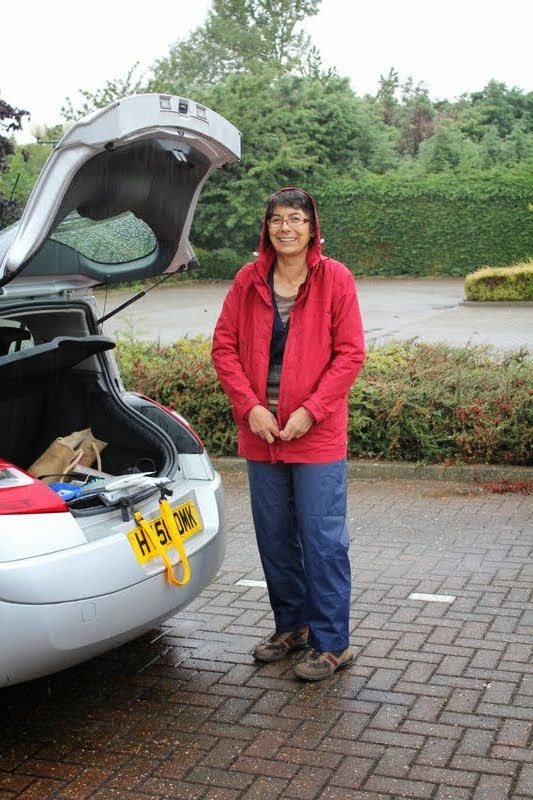 Wet - a day for testing your outdoor gear.


Not many photos, and I'm not entirely sure we appreciated what views we saw. Lunch at Woodford in the Dukes Arms, where they even had a wood fire in the bar. Oh August in England . . .I  ♥ underwater walking.


We set off from the football ground, and found our way to the lock nearby and followed the towpath.  Slightly off the official route maybe, but near enough as we soon saw the signs.  We followed the river bank past the Frontier Camp, until we reached a Nene Way sign near a footbridge, pointing away from the river and uphill across fields - recently harvested and sticky with mud. We walked round the edge of these fields - it was slightly less sticky.  Eventually we emerged, several inches taller and with worked-out leg muscles (I wish) into Little Addington. We walked through the village, and almost decided to wait for half an hour in a bus shelter, along with copious quantities of swallow or martin droppings, either for the rain to stop or the pub to open.  No, we carried on, womanfully.


We left the village loop road, and shortly after we joined the Irthlingborough - Woodford Road we turned off to the right and followed a path back down to the river.  Over a couple of bridges and through a gate which gives access to anglers' cars, and past the marina and disused railway track, and the path becomes a road leading to the old Ringstead Station. At the T junction we turned left towards Willy Watt Mill and Woodford.  The pavement is raised above the road level here - useful if the road floods. It has recently been improved with non-slip planking.


At the mill, which unfortunately doesn't run to a cafe for wet walkers, we found the Nene Way path leaving a track to the right, before you reach the bridge over the dismantled railway.  It crosses the disused railway line and turns right again shortly before Glebe Farm.


We crossed this field diagonally,  passing some wet and uninterested cows grazing there, and continued following the signs until we reached Woodford.  Hunger had to be heeded, so we went to the Duke's Arms.  Good food and even a fire helped us begin to dry our clothes slightly.


From Woodford the signs took us between groups of houses and through a stile into a field.  The path takes you diagonally downhill to the bottom of Woodford Shrubbery, then through the woods.  When we came out of the shrubbery we should have turned right and right again to get back to the Nene.  We did make a slight deviation, but were soon back on track.


Then we followed the river for a short distance, crossed the dismantled railway again, and headed towards Denford.  The church is slightly to the right of the lock we were aiming for.


At the lock we turned left and the path led us across fields towards the A14.


The path goes east under the viaduct, doubling back west to make its way across fields to where the road bridge into Thrapston crosses the river near the Woolpack Inn.  Was the rain starting to ease off?
My verdict on the wet weather gear - coat not really effective, waterproof trousers ok, but encourage condensation, boots dry inside, though some water got in via my socks I think. A long time since I've been wet all day like this.


Map and details
Posted by aliqot at 5:58 PM