With Marta. 11.1 miles, including our wander round Earls Barton. Hot, sunny, dry underfoot in spite of yesterday's rain.A lot of up and down, to visit the villages above the flood plains.


From the info board at Billing Lock:

The River Nene is a particularly important navigation as it
links the Grand Union Canal to the sea and, via the 'Middle
Level' to the Great Ouse.  Rising at Badby, Naseby and
Yelvertoft, the Nene becomes navigable at Northampton
where the three tributaries combine.  The navigation, which
was opened on 7th August 1761 when "7 coal laden barges
reached Northampton with the customary band of music,
flags and streamers" begins at the junction with
the Northampton Arm of the Grand Union Canal near Cotton End
Lock, Northampton  and extends 91 miles (147 km) to the sea.
There are 37 locks between Northampton and Peterborough.

We set off from Billing, via the lock with its two different styles of gate - the 'pointing door' and the 'guillotine'. The Nene Way marker showed the way across a bridge, and a couple of fields towards the Brafield Road. We took the road and turned left into Cogenhoe, now an attractive village on a hill above the Nene valley. 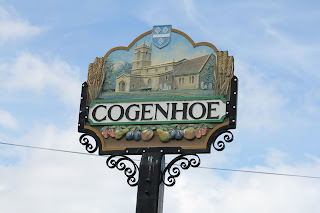 In a central position is a village sign erected by Cogenhoe and Whiston Parish Council . . . in commemoration of the millennium July 2000.


On four sides are pictures representing the history of the village, and  in the base there is a time capsule compiled by local children.

The pictures show local scenes, transport and the past industries of brick-making and shoe and boot manufacture.


There is an active local heritage society - Cogenhoe and Whiston Heritage Society .
I also happened upon a blog entry about Cogenhoe Football Club  .


From Station Road turn left into Church Street, and follow the Nene Way signs through a small lane and gate into an open field.


When we left Cogenhoe I was surprised how high we had climbed above the river. It's only about 300 feet above sea-level and 100 feet above the valley, but there are lovely views over sloping fields of cows, and trees, and the path descends quite steeply to the Nene.  Over to the South East Whiston Church is prominent on the hillside.


By the river we found a great stash of ripe blackberries, the best so far this year, and pretty early.


Follow the river as it winds its way to Whiston Lock. At this point a man was sitting next to a boat  - la Sabatera.
'You've found a nice quiet spot', I commented
'Not by choice,' he replied.  'Have you seen a boat making its way along here?'
He was stuck at the lock for the moment - but was 'rescued' as we saw him two or three times later.


As you walk in the church tower is very striking.  The centre of the village is attractive, though it was impossible to get a view of the church again without going into the churchyard itself - there are huge trees in full leaf, and I think we'd have missed it if we'd arrived from the other direction. 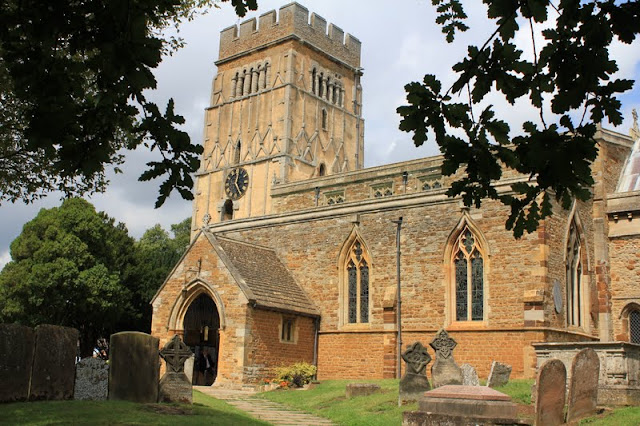 We had lunch in Jeyes Apothocoffee shop's Walled Garden . Some interesting history on their website. 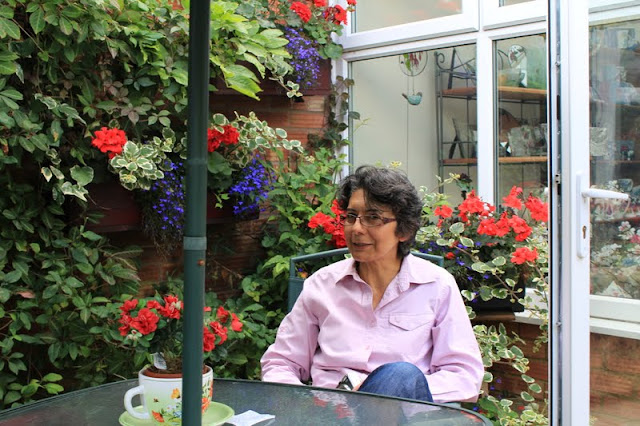 Lunch over, time to move. Just about the half-way point, we reckoned.  Loins girded, and packs backed we walked to the end of the village to Mill Lane.  We turned right and follwed the Nene Way down to Mill Farm and over the river, following the path between the river on our left and the lakes on our right. 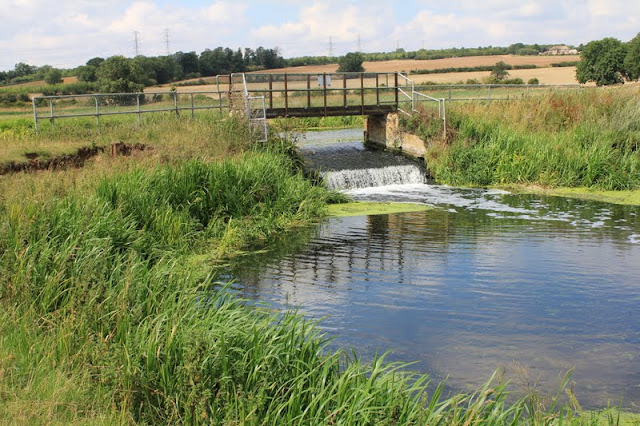 We didn't cross the bridge over the weir but continued on the right of the river to Hardwater Mill, where, according to Mia Butler in her book Exploring the Nene Way  a miller fell in the water and was drowned in 1309, and Thomas à Beckett called in on his way to France, after he escaped from Northampton Castle.

We followed the path over the bridges and to the right. At this point we went slightly off course by following a concrete track tot he right of the sewage farm. We were able to cut back and find the path with gates leading up hill to Great Doddington. The village has a  shop - handy for a cold drink, and a public area with a seat just across the road too.


On through Great Doddington, with a short diversion when we saw a sign for the Nene Way, followed it for a while, then decided it was leading us in the wrong direction - back to Cogenhoe.  The path we wanted is to the right shortly before the Stag's Head.


It leads downhill through fields, and another mill where several boats were moored. 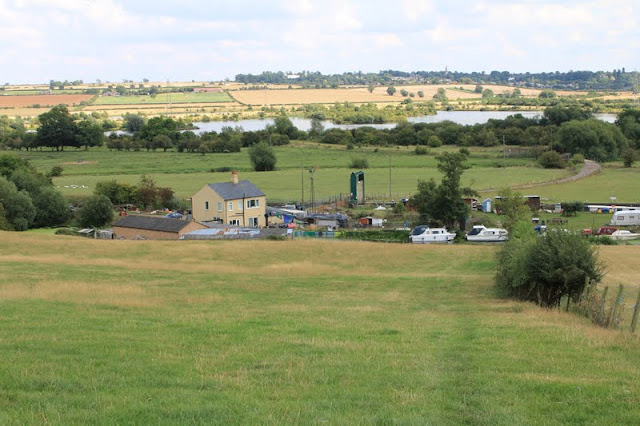 The path stays on the left hand side of the river,  all the way to the Embankment.  We were overtaken by La Sabatera only to catch it up at Wellingborough Upper Lock.
We refused to resist the temptation of an ice-cream before making for the car, and seeing another section of the walk completed.