Mon, 2016 Jan 4 9:20 AM  GMT.
With Gordon, Eddie and Maureen, on a day when the clouds broke up a little, rain was forecast for later, and the breeze was quite chill. Just over 6 miles.

We set off from Wilbarston village hall and headed west along Carlton Lane, then turned left on Queens Road, and right along Scotts Lane. At the junction with Main St and Rockingham Road we turned left and followed the road for some distance as it went underneath the A427.  We continued as the road became a track and then a path up to the disused airfield.
We turned left and followed the perimeter of the airfield, on a good surface,  for abround three miles, almost back to the point where we joined it. 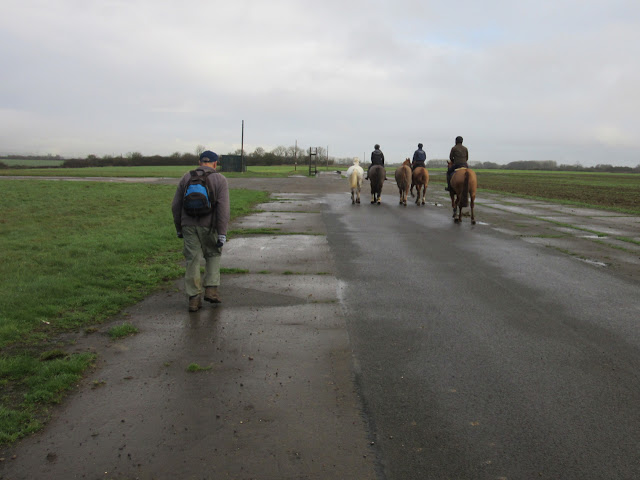 We heard horses approaching - they were obviously as glad to be outside as we were!

Our break was at this point - possibly a weighbridge . . .we didn't hang around for long, as we began to feel chill again.

We carried on past the path we arrived on, and a few hundred yards further on took the road to the left, leading off the airfield. At the junction we turned left, and followed the road as far as the main A427. We crossed this and walked back to Wilbarston Village Hall.

Did you feel the old airfield ghosts in the strange light? As you know, just finished The Greatcoat!
We've had similar weather here today.

This seems to me to be one of the least haunted airfields. It's been used for agriculture for years, and people used to learn to drive here. It's regularly used by local dog-walkers and is very open all around . . . though maybe I'd feel differently if I was walking alone there in the evening!