Thu, 2015 Aug 27 9:35 AM BST
With Maureen. Long break at Grafton, then coffee stop at Cranford. Arrived at the car just as the rain started to come down heavily! Seven and a half miles or so.

From Warkton, opposite road junction between cottages, and across the lime tree avenue, as on this walk of August 18th.  The route is the same as far as Grafton Underwood, and it helped to have walked it before.

At Grafton Underwood we paused to check the next section of the route, but were greeted by a local resident who handed us choc- ices on sticks, and told us a lot about the village and the Duke of Buccleuch who owns all the property.

From Grafton we took the road to Cranford, and made use of the Old Forge for a coffee - three times in two weeks, I think. 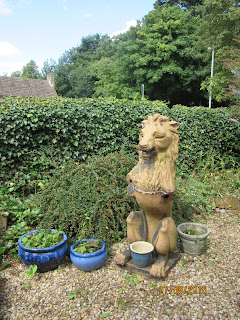 From Cranford we walked out along Top Dysons, following the bridleway until just before the Grange. Here we turned right, roughly northeast, and continued for about a mile in this direction. At a point where there is a concrete post we turned left, heading slightly north of west, crossing a section of lime tree avenue again, until we met the road on a bend. A left turn and some traffic dodging on to the verge took us back into Warkton.
I'd just unlocked the car when the heavens opened.

Map and details
Posted by aliqot at 4:43 PM