With Norma, Marion and Steph. Grey, but brightened up as we walked.  A little over seven miles in all, with a coffee/tea stop after almost five miles at Lyveden, and lunch at the Old Barn, Wadenhoe.

We took the path past the church and walked in a clockwise direction.  The route is well trodden and well signposted.

From Wadenhoe church we followed the path over a couple of cattle grids to the road to Aldwincle, turned left along the road, then right on a path which took us to another small road. Here we turned left through a metal gate and walked along a wide grassy track, which used to be part of the road from Thrapston to Oundle.
Just over half a mile down this track, a footpath goes to the right, heading for the woods. Walk along the edge of the field and take the path along the edge of the woods.

After another half-mile or so the path becomes wider, and joins a track.  Follow this to the right almost through the woods. The sign for the next turn-off is slightly hidden, but if you come out of the woods on to the big track, you'll need to retrace your steps for a hundred yards or so. The small track cuts through to the right, and emerges at the edge of a field.

Turn right towards Lyveden New Bield. The marker posts are clear and the path goes behind the New Bield, with its car park and you should be able to get a drink and snack at the tea shop, even without making an official visit.

For more details about the New Bield - see this post.

From the New Bield the path goes across a field and directly through Lilford Wood.  At the other end of the wood, we crossed a small grassy field, then a footbridge, walked uphill through another field, until we reached a metalled track. This took us  for a couple of miles or so back to the small road we crossed much earlier in the walk. Here we turned right, then left soon afterwards, taking a footpath alongside a hedge. We had to persuade the cows to move - they were taking shelter just in the gateway, but were no problem.

The path is well signed and leads into `Wadenhoe village, coming out between two houses and on to the main street.

Lots of butterflies around, mainly meadow brown and ringlets, though we saw one comma and tortoiseshells as well. 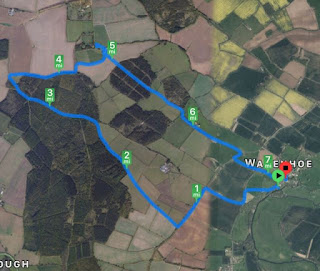 That sounds lovely, Alison. Pretty flowers in the tea-shop garden!

It was very pleasant and not over strenuous!

The teashop looks a pretty place