With Maureen. A fine sunny day after early cloud. In all about 8 miles.

We walked down to the Spread Eagle - around a mile before starting the walk proper as described in Mel Jarvis's "Around Corby" book.

From the pub you walk through the tunnel under the road. When this reaches another road, turn right over Harper's Brook, and then left on the other side of the road. The path goes behind some houses and emerges onto a small road. Today the flowers were lovely in the first garden. We turned right along this lane and right at the end, taking a small path on the opposite side of the road we reached.  After around 100 yards we reached Woodlands Lane, and turned  left. We walked to the end of this, ignoring two footpath signs on the way.
After a turn to the right, there is a path through a metal gate, and over a bridge. There is a paved path going up to the top left corner of the field, leading to the road with the old station building, slightly to the left.

At this point we walked along the road, turning left at the first road, then under the railway bridge and onto the bridge over the new Geddington bypass. After the road bridge we turned left and followed the footpath parallel to the new road until it turned right, along the old route. It crossed a stream and then went uphill with the hedge on our right. After the first field, the path headed diagonally to the left. At the highest point near an electricity pylon it crossed another path. We paused for a snack before taking the path continuing our line of travel. This was clear on the ground.  The path led us to the road between Newton and Geddington. Today we chose neither, but turned very sharply left along the nearby footpath leading back towards Little Oakley. The two paths form a V shape in the field.

We followed the instructions in Mel's book, across the first field, through the hedge, across the second field and through another hedge.  There is a hedge on the right. We walked alongside this through a short section of a field, then through another hedge.
Up here we here the whistling call of the peewit (lapwing), and see a few flying around. We misread the instructions at this point and ended up in a corner near a pylon, with no way through. A short retracing of our steps to a track we should have taken to the left, slightly uphill brought us back to where we should be. We followed this until we could see Little Oakley ahead of us - see picture below. 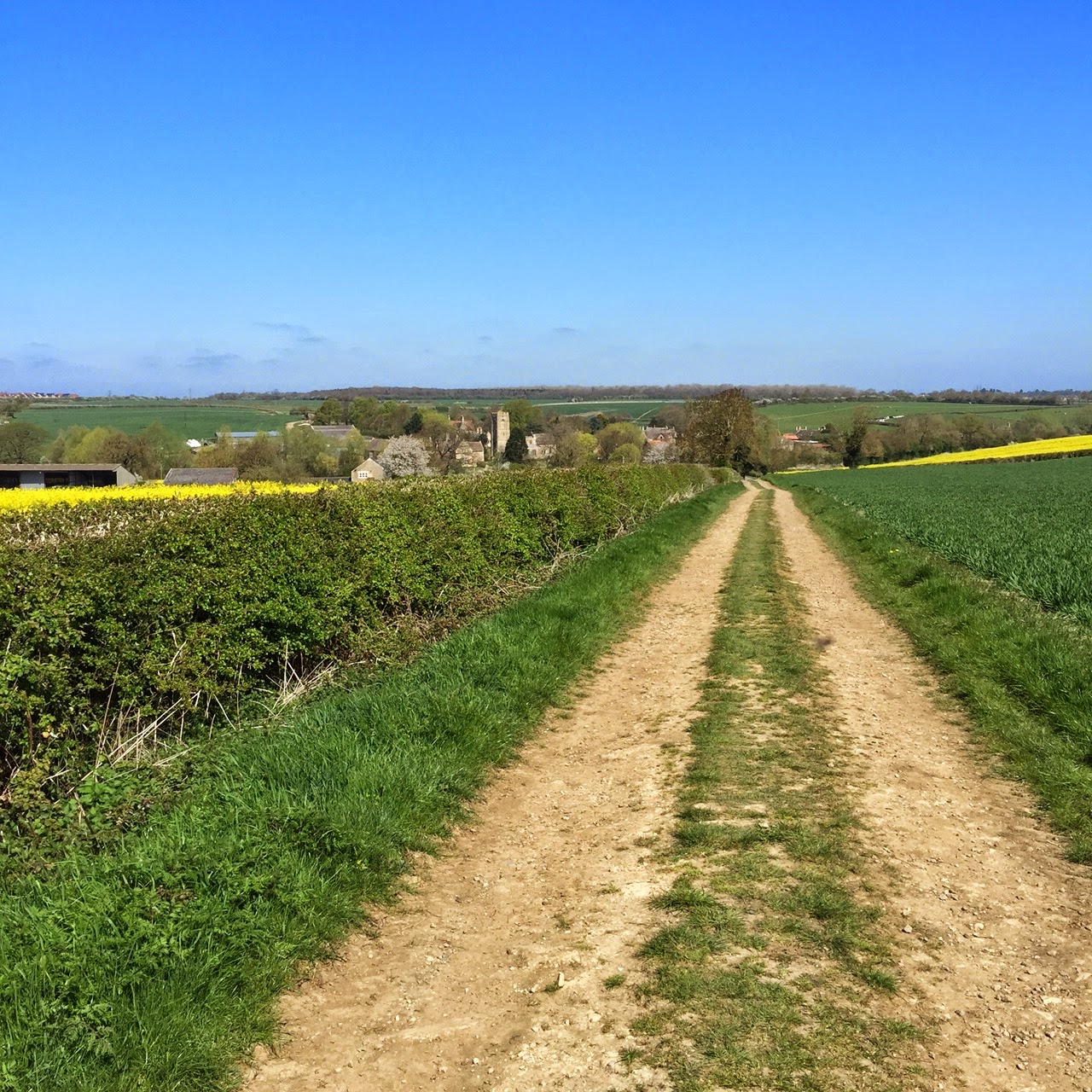 The track joins a road into Little Oakley just before the stream. Just afterwards the path turns left into a field. Slightly awkward gate. Then it follows the stream before heading towards the new bypass once more. There's a slightly dodgy very small stream crossing.  This time we see the viaduct on the other side, and cross over using the underpass.

We go under the viaduct and follow the path past a private road to Oakley Hall and into the parkland near the church area. We walk through and back out into Great Oakley, turning right and taking Levin Road back up to the  mini roundabout, and then left to the main Corby to Kettering road at the big roundabout. 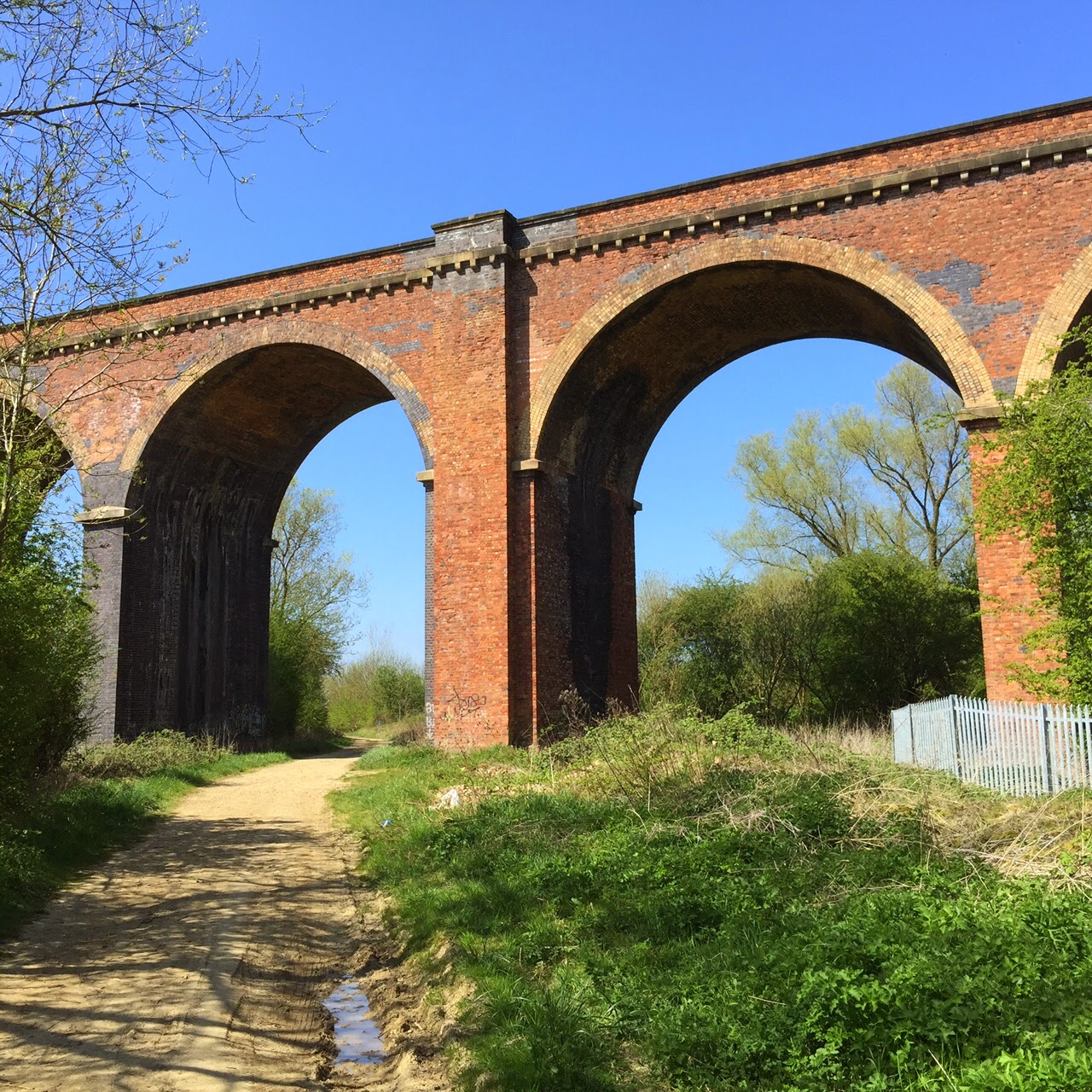 It must have been lovely to escape busy roads and be in the Spring countryside.

My explorations are always hindered by the absence of maps or any kind of planning...I'm just like "Oh I want to go there" and head off roughly in that direction.

I've found myself in some beautiful places. And also in rubbish tips, swamps etc.

Sometimes I just wander too, but I am fascinated by maps as well. I like following other people's walks too, and sometimes that way I visit places I would never have bothered with at all.