Thu, 2013 Jul 25 9:25 AM British Summer Time
Led by me, with Maureen and Barry. Flat walk, some arable fields were awkward, but mostly very easy and clear. Distance just over 10 miles.


We needed a change from north-east Leicestershire, so I thought Stamford, and looked for somewhere with paths that would link. I chose Uffington,  and this walk that takes in Greatford, with its hall and smart houses, Barholm with church and another Hall, then Casewick Park and Hall with ha-ha.

We park near Uffington Church, 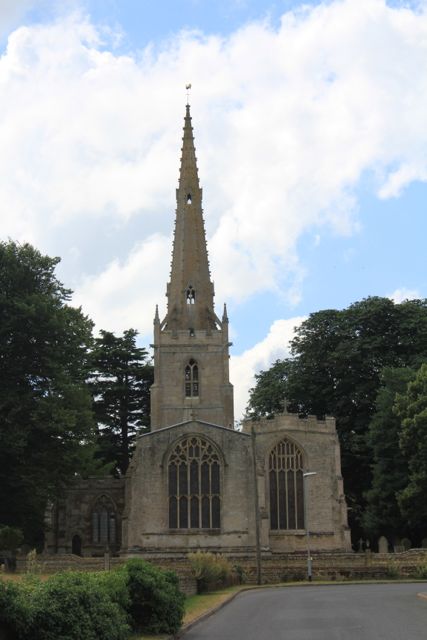 close to the primary school, 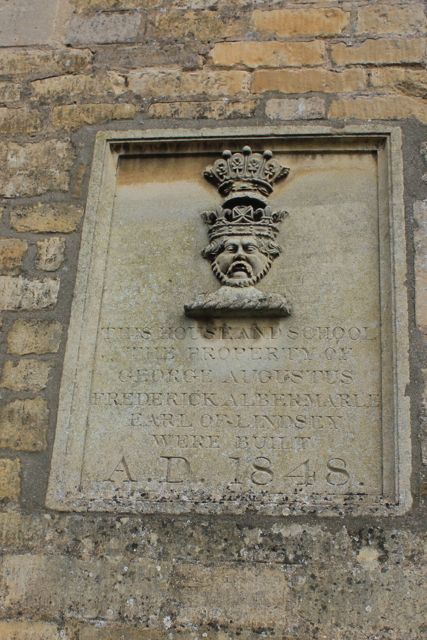 This house and school
the property of
George Augustus
Frederick Albemarle
Earl of Lindsey
were built
A.D. 1848.
then walk back to the main road towards Stamford.
We pass a drinking fountain monument to celebrate Queen Victoria's Diamond Jubilee in 1897, and then the gates to the church are on the right 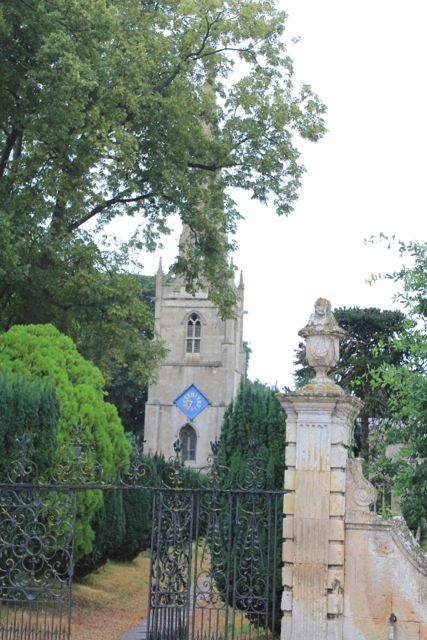 and those of Uffington Manor on the left. We continue past several buildings, and past West Hall Farm, until we find our footpath before the next series of houses. It's a narrow path and comes out into arable fields. 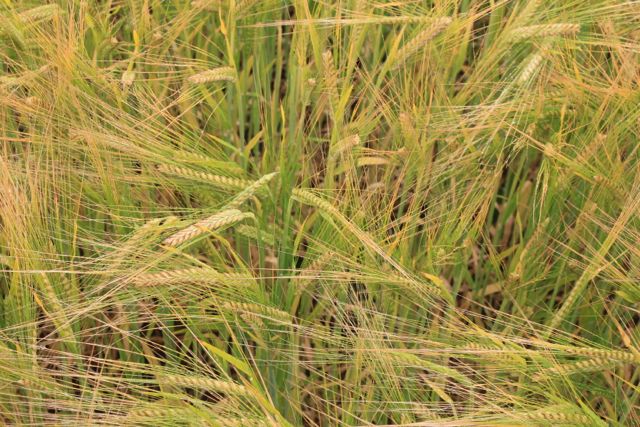 It leads to Mill Mound, which we think is in the trees marked off as private, and for nature conservation.  The path goes along a wide track heading north, turns right for a short distance then north again.  We know we have to turn left after about a mile, and  after a quick grid ref check by Barry, we see the waymarker!   So, it's left, then left then right until we come out at a right-angle bend in the road from Newstead to Belmesthorpe. We should have turned right just before this, so back we go to pick up the Macmillan Way, along a wooded path going north east for about a mile.

At the next road we turn left, then take the first junction on the right. Still walking more or less northeast, we follow the road for half a mile or so before meeting the railway line and level crossing. 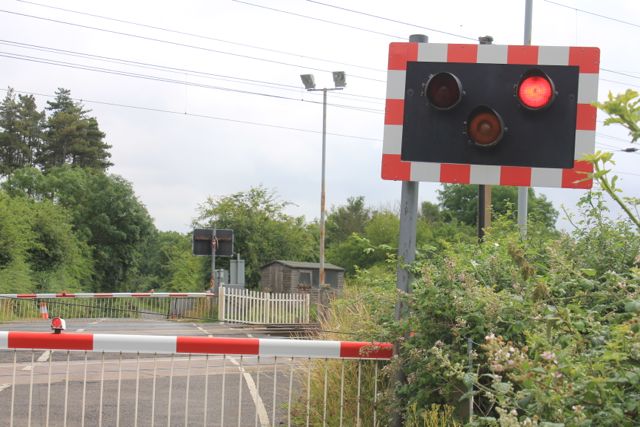 Another half a mile takes us to our turn off - the footpath goes left opposite a private farm road to the right.  The path follows a wide track, which kinks slightly to the right - don't be tempted by the stile straight ahead, which gives access to the small building at the weir, and nothing else. 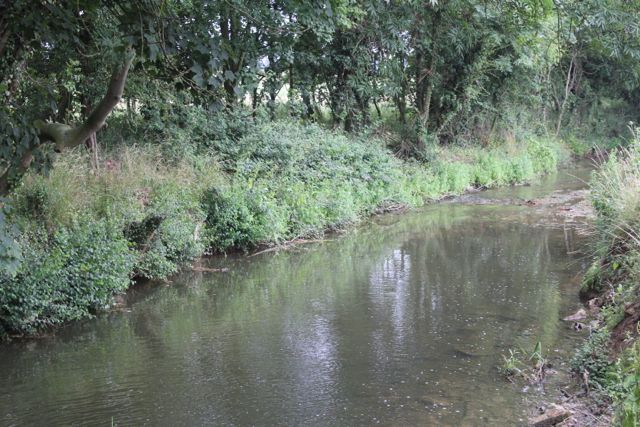 After crossing a bridge over the West Glen River - great name - the map says we are in Shillingthorpe Park.  We walk past cows, who couldn't give a damn, and have a break just before going into some woods. 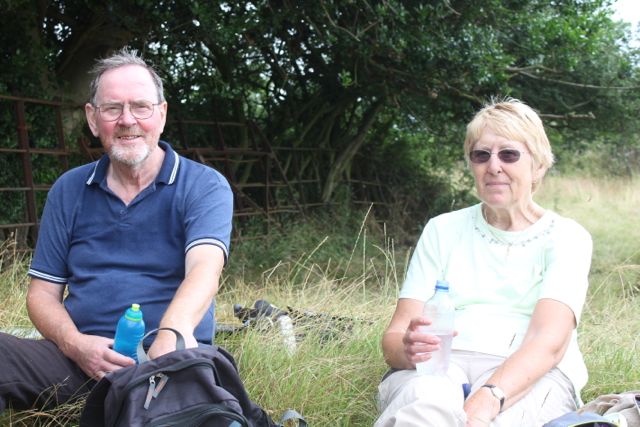 The path is clearly marked as the Macmillan Way, and into the woods, but we could as easily have skirted the trees and turned right here, instead of a hundred yards further on. But then we'd have missed the group of boys on bikes, who were clearly enjoying the start of the summer holidays.

The next part is probably the least pleasant part of today's walk - the waymarks are there, but point straight across a field of rapeseed - and it's wet and has flopped over the path.
Intrepid walkers that we are,  we carry on regardless, and end up with wet legs.  Remarkably we are still on track when we reach the wooded path, fenced off from the land alongside.  We emerge into Greatford - a settlement of fine dwellings and gardens.
We turn right, and walk almost south, past the Hare and Hounds, and along a surfaced path to a stile. Then it's over fields, to a bridge over a dyke, across another field and into Barholm.  The church porch is just too tempting, so we pause a while.
There's a cross in the churchyard, which commemorates Thomas Carew Trollope who was killed in 1915 during the First World War. Info from website linked above. 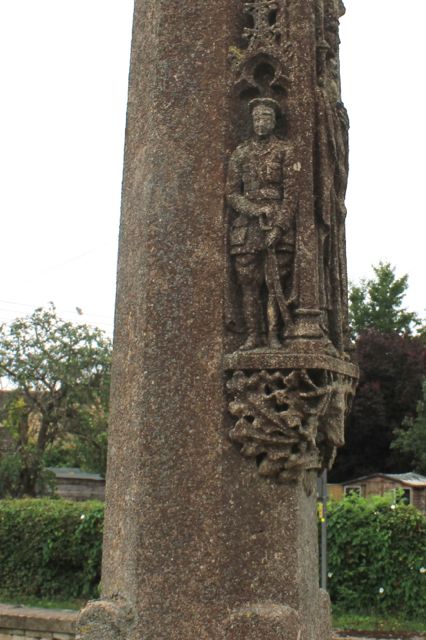 The church tower has the date 1648, when it was rebuilt to a large extent, during the English Civil War,  and the odd inscription:


Was ever such a thing,
Since the Creation,
A new steeple built,
In the time of  Vexation 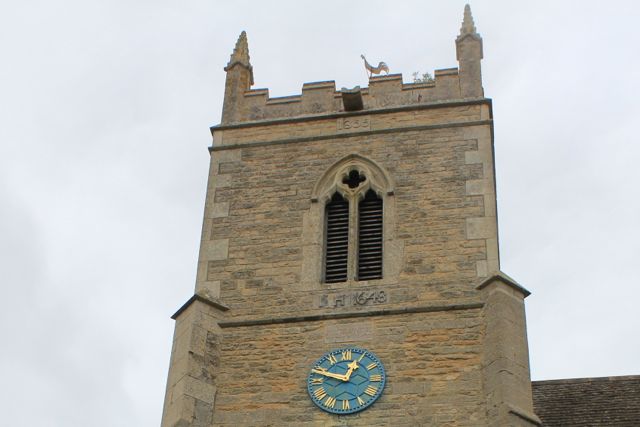 The clock dates from 1919, and commemorates another World War I casualty, Charles Cyril Stapley.

We turn right out of the church and follow the road, as it goes round past the pub and the old hall. The wood pigeon below had twigs in its beak, and was so unworried by us that we thought it wasn't real, until it blinked. 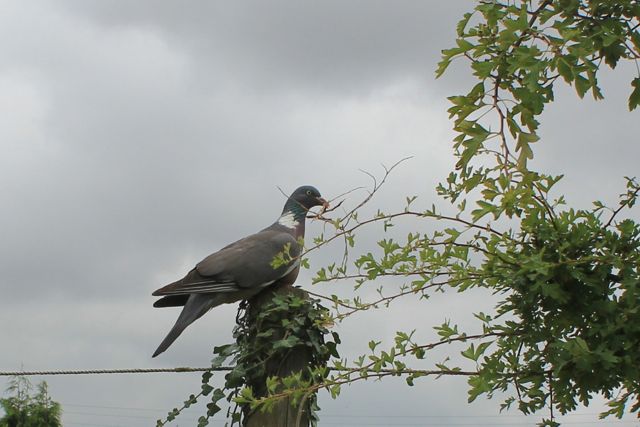 The road becomes a track. At the far end, hidden away, is the footpath sign, directing us over four or five fields, southwest towards the main railway line - no level crossing gates here, but the view each way is clear.
Once across the railway we go over a bridge into a field full of potatoes. We follow tractor tracks to where the path should leave the field, and there's our waymark.  Through another field with a clear path and we arrive at Casewick Park. It's rather like an Alice in Wonderland fantasy, with lollipop trees and avenues and an army of gardeners sprucing it up.

It's a beautiful house, and the setting is magnificent too.  There's a ha-ha to keep the sheep off the lawn without spoiling the view from the house.  We fantasise awhile.  According to wikipedia it is the site of a deserted medieval village as well, but only two houses remained by 1816.

It's only a mile back to the car, down Casewick Lane, past Meg's Well, which seems to be the stream in the wood to our left, according to a helpful driver passing by. The road leads directly into Uffington and we arrive back at the car after a walk of just over ten miles.

just realized I could comment again. I'll read through your latest posts and commment properly.

Fingers crossed this change of settings has done the trick! Good to hear from you on here.

The flower Alison, "Campanula latifolia', the clue is in the latin name, 'Giant Bellflower'.

The flutter you managed to shoot looks like a very old worn out male Ringlet.