Thu, 2013 Jul 4 10:21 AM British Summer Time
Led by me, with Barry and Gordon. Hilly, mostly good underfoot - some mud in woodland areas. Great views from Beacon Hill of course. Fine, warm, sunny afternoon. 1,161 ft of climbing. Around 13 miles including add-ons. Moving pace much better than over all pace - we did stop quite a lot, but - no way do I ever walk at 31 mph!

We - well, I, - suggested that we should try Shiela Dixon's Leicestershire’s three peaks challenge . In the event we managed  two.  According to our magic machines it was a twelve and a half mile walk, involving over 1 000 feet of climbing – not huge by Yorkshire, Lake District or even Derbyshire standards, but enough of a challenge for today.

The fact that it’s a good hour’s drive from home doesn’t help, and then I have to walk back to the car to park it in a much safer looking layby - the one Shiela recommends in her blog - at SK458120 on the A511 between Bardon and the M1. So it was 10.20 before we started.


Walking alongside the A 511 isn’t a bundle of laughs, but there is at least a footway of sorts.  Back towards Bardon for 200 yds or so, our footpath leaves to the right, almost opposite Forest House. With all the leaf growth this year it is not exactly obvious.   Once we find it, it’s overgrown in places, but clearly marked – those lovely Leicestershire yellow posts.


On as far as Brook farm, where we walk past the regimentedly reverse parked cars, and then the moated Old Hall and turn left to walk close behind the house.


Our path goes north east, and we turn left along the Ivanhoe Way when we meet it in less than half a mile.  We’ve been climbing gently from the farm, and continue to do so towards Bardon Hill Wood. 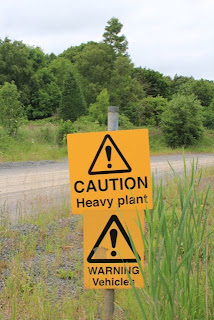 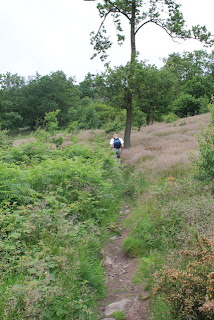 We cross a quarry road and now climb more steeply through rocky scrub, up to the radio mast near the summit.  But where is the top?
We don’t find the trig point, in spite of using a magic machine to show our altitude – we must be almost at the summit – I don’t realize until later that there is a trig point and rocks.  I’ll have to go back another time. Will Barry and Gordon accompany me??
The way down is simple – follow the road behind the mast until we meet the quarry road,  then turn just after Kelhams Farm – there’s a diverted path clearly marked which more or less follows the power lines.  The OS map has a path marked going further to the left, but this has been discontinued.   No matter, we arrive at the road at Upper Greenhill Farm by a slightly roundabout route.

We cross over and take the bridle way past Charley Mill farm.  Just before entering Burrow Wood is a nature reserve with a bench – do we want to have a break?  You betcha.
We walk through Burrow Wood, and then take the right hand path when it forks off.  This joins a small road to go past Woodleys,  Charley Hall and Rock Farm.  At the T-junction we turn right and go under the M1.  We follow the road for almost a mile alongside woodland, and over the crossroads at Bawdon Lodge – this was surprisingly busy! 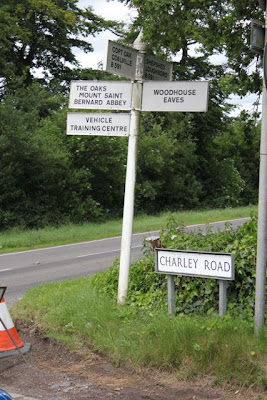 A little further along and at a house marked on the map as Bawdon Cottage Farm, and on the house as Charley Chapel, a footpath goes off to the left.  This leads down a little way then we begin our long gentle climb to Beacon Hill. We meet the road from Shepshed - and turn right. What a delight!
The road is closed to traffic for resurfacing - this is much better for us! 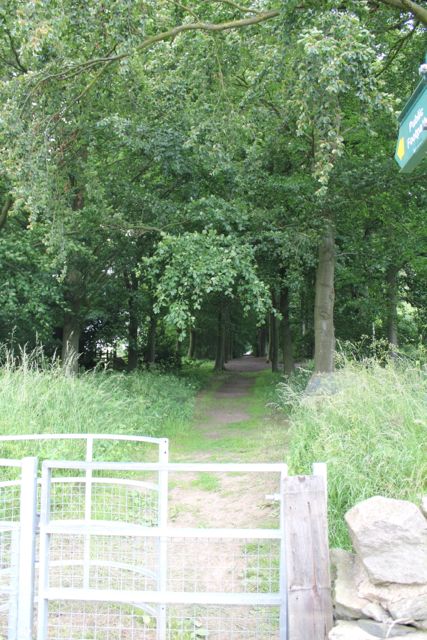 After a couple of hundred yards we turn left along an avenue of trees planted in memory of one of the early members of the Leicestershire Footpath Association. 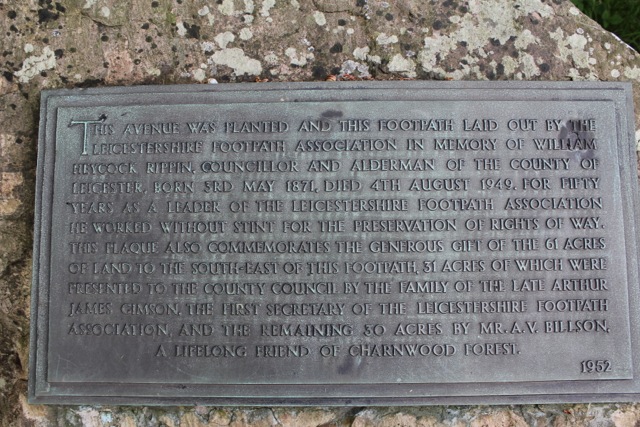 The path climbs very gently - and about halfway along is a platform with a view. 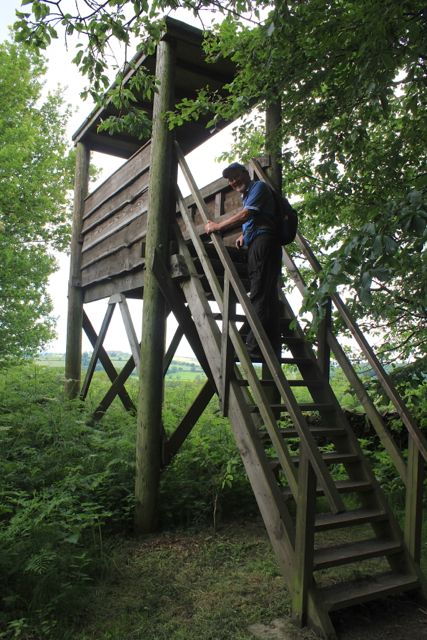 We admire it briefly, then continue to the end of the avenue where we turn right.  The approach to Beacon Hill from this side is impressively craggy. 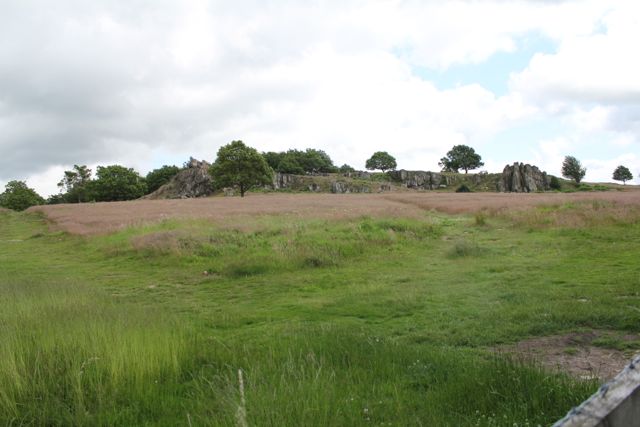 None of the climbing is too severe and we are soon close to the summit.
There's an info board about the formation of these hills - volcanic activity from around 600 million years ago and folding about 400 million years ago, then erosion. 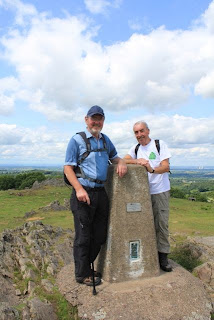 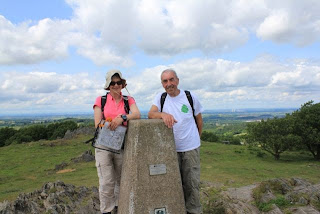 After bagging the summit, we have another snack break.  Is it all downhill from here?
We go down past the toilet block in the car park, then follow the path past the charcoal burner to the cross roads. 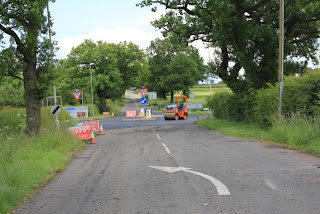 Easy walking again - no traffic today. Is this what royalty feel like?  The road straight on is clear and quiet, and we turn off along the drive towards Black Hill Farm. A quick wave at the security camera, as we take the proper footpath along the drive a bit, then to the right towards Ulverscroft Lodge Farm.
We have a little difficulty finding the correct footpath here, as the signs disagree with the map.  When we eventually find it we discover that it has been diverted - a sign at the start of the diversion would have been mighty helpful.
We carry on over the footbridge then up through woodland and alongside Poultney Wood, climbing steadily up to Copt Oak.  It's only later that I discover this is the highest point of the M1, and a famously excellent spot for Radio Leicester's transmission mast.  Almost as high as Beacon Hill. Perhaps we can count this as our third peak? 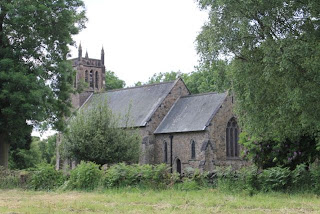 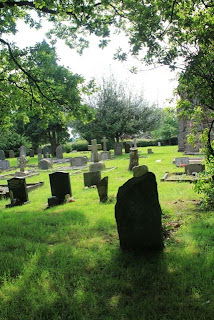 The church is an attractive building, and there are a few gravestones made of the local stone.
After this we walk through part of the village, past the former Youth Hostel, and the Copt Oak pub, then turn left and walk along a busier road over the motorway.  After a short distance our path is to the right - almost hidden by vegetation again, but clearly signposted afterwards.  We meet the tarmac road to some houses, and take this rather than the overgrown path, but have to negotiate a barrier to return to this when the roadway finishes.  After a couple of fields a path goes off to our right and we follow it to Brook Farm and Old Hall Farm - with the moat. 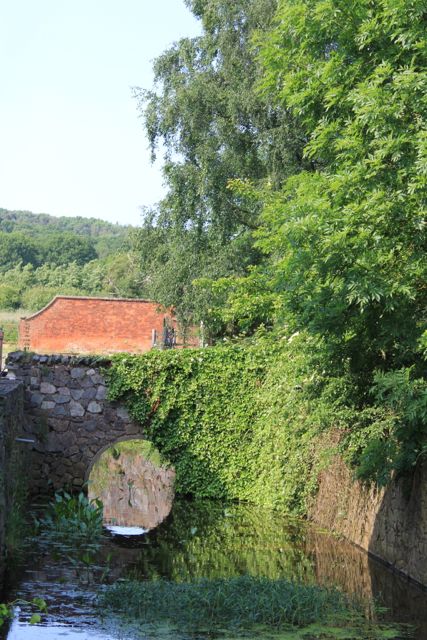 Now it's just a case of retracing this morning's route for three quarters of a mile, and we're back at the car.

1161 feet, you almost needed oxygen at the level. {:))
No wonder those two looked slightly the worse for wear.{:))
Love the Highland cow.

Well, compared to the fens it's positively mountainous out there. Worse for wear - not a bit of it!
Most of the cows on Beacon Hill are longhorns with quizzical expressions - see my post from 11 Sept last year. They sometimes use pigs to graze parts of it as well, though I haven't seen any.

Looks like you had a great day for it (if a little hot!) Some lovely photos. Glad you enjoyed it.

A great walk Shiela, and I will persuade the others to hit the Charnwood Heights again! It's the nearest I can get to Derbyshire and Yorkshire hills without heading on up the motorway!
Billa Barra and Whitwick are next on my list.