Led by Barry, with Maureen, Eddie, Gordon and me.  Fine, coldish wind. 8 miles approx. I managed to screw up my garmin trace.  The route is similar to the one we did on 19th September, but slightly longer, and walked in the reverse direction.

We started from Southwick church, and followed the lane where the two benches are. At the bottom end of the lane, if you look to the right, you will see Henrietta, of whom more later. 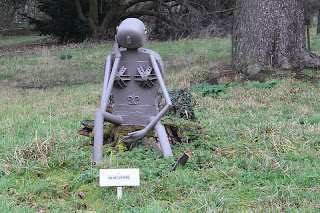 The lane crossed the stream via a bridge just beyond the ground of the Hall. The path wends its muddy way across the field straight into the woods, but we turned right (east) instead of straight ahead, then later left (north) through Howe Wood.


We followed the path around the wood, turning left alongside the wood, then right along a field boundary. The huge Apethorpe Grange came into view, and we followed the 'diverted bridleway' around the small lake, where we saw three herons, as well as a few gulls.  The path took us round more or less three sides of a square, coming out near Lodge Farm.  Here we took the road to the corner of Tomlin Wood, where there was a choice of three tracks. The middle one leads towards Morehay Lawn and wood. We climbed up gradually pausing for a break at a 'bothy'. (Not often you find a flush toilet out in the sticks!) Then we followed the way marker down to the left.
The walk continued past Morehay Lawn and into Holey Brookes, where we turned right, then left just before Southwick Wood. The path runs slightly south-west,  alongside the wood, and past Boars Head Farm and Cottage, and becomes a surfaced track,  leading gently downhill, past Crossway Hand Farm, down to the Southwick Road.

Across the road, we crossed a bridge and followed the path uphill along the hedge as far as the derelict Tottenhoe Lodge. Here we turned left following the hedge, then through a gate and diagonally across the field to another gateway. Here the path dips down into the hollow. There is a stream marked on the map, but even in January, there was no more than a muddy trench with the odd puddle. A bit of a drag up hill to the farm at Provost Lodge, where we walked between two outbuildings, then followed the road until at the top of a slight rise there is a gate, and the path turns left. We continued along the path beside the dried bamboo, past the Short Wood Nature Reserve and emerged on the Glapthorn Road, near the Water Tower. A short half-mile down the road, and we were back at our start point.


Eddie wanted to dip his wellies in water. I wanted to photograph Henrietta (see above). Off we went to the bridge where we met a man with a dog. He told us he'd made the figure, inspired by Henrietta Moraes who was a 'muse' of Lucian Freud, and Francis Bacon.  Bacon's portrait of her is being auctioned at Christie's next month, as it happens.


Bill Richardson, a resident of Southwick for 76 years, also showed me these two works representing the changes in agriculture over the period. 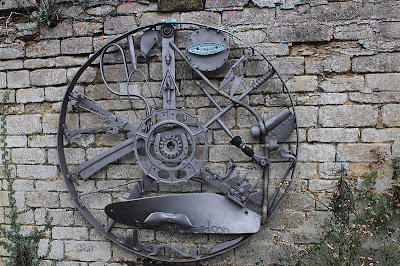 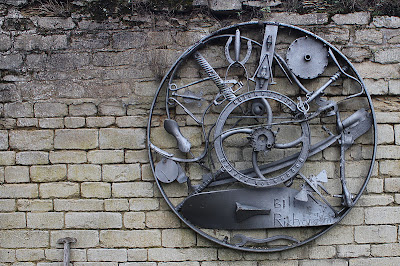 I was reminded of the implement gate we saw at Holly Lodge near Moulton, on Monday 8 August 2011. No connection apparently.

Bill Richardson also made the stone village sign, which I'll photograph later, and produced a book (The Arm of Coincidence?) under the name of Bill James.

Map and details - health warning - chunk in middle where I'd switched tracker/timer off, and chunk at end part of homeward car journey
Posted by aliqot at 3:50 PM

Fascinating ironwork. I'm not sure I'd recognise Ms. Moraes from the sculpture but then you probably wouldn't from the Bacon portrait either!

The Bacon is for auction at Christies in March, I understand. A mere £18m or so, it seems.