We parked at Fineshade, and walked from the car past the café, and round the wood - south, then east, then north.  Some of the Jurassic Way signs are hidden away, so it's worth having a close look at the map.  We came out of the woods on a track leading downhill towards the A43.  On its way it passes an electricity substation, and as you reach the main road there's a small cemetery.

Cross the busy road into Duddington. Go past the pub, and in a short while take the first turning left down a steep hill. 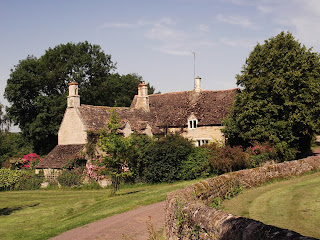 You pass some splendid houses before coming to St Marys Church.  The path goes through the churchyard. 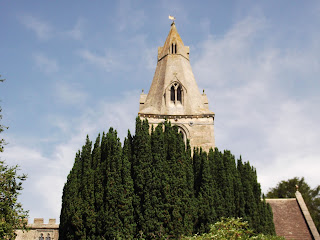 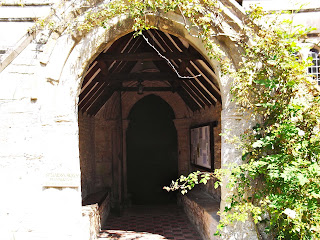 At the other side of the churchyard we turned left, down to the bridge over the Welland, which marks the parish boundary between Duddington and Tixover, and the county boundary between Northants and Rutland. 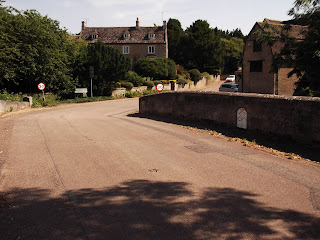 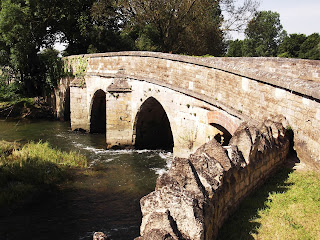 Just after the bridge the path turns right into a field by the river. 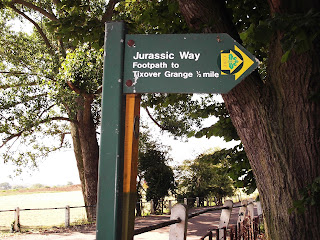 There was a gate which someone had smeared with some kind of blue paint - we climbed it instead of opening it - at the hinge end, well away from the paint. 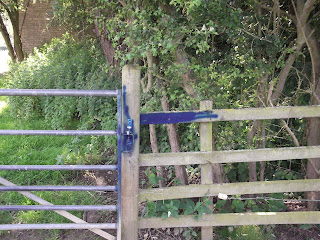 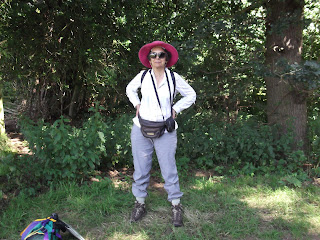 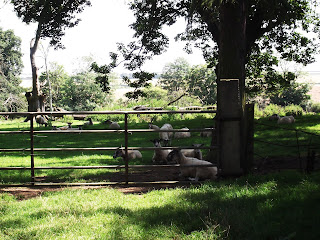 The path took us across a field and into a strip of woodland. We picked a shady spot to have coffee - watched by shading sheep in a nearby field.

We crossed another grassy field to the road to Tixover Grange, then turned right and walked along for a short distance. Just after the buildings of the Grange the footpath turned off through a hedge on the left,  cutting off the corner of the road. We crossed the road when we met it again on to a long straight path - over half a mile - beside fields whose edges were full of poppies and marguerites.  This took us almost to Geeston, which is almost Ketton.    The footpath has been diverted at this point, but is clearly marked and fenced off.  It continued along a narrow path behind some houses with huge gardens, until it met the road to Collyweston from Ketton.

We had to walk along the road for a few hundred yards, before the footpath turns off just after Collyweston Bridge.  It heads uphill, and was a bit of an effort in the heat!  After the third field we emerged on a track which becomes Ketton drift and leads into the village of Easton on the Hill.   We spotted the village shop and the Bluebell pub, and it was lunchtime.  Sandwich and a mug of soup for me and ciabatta salad and chips for Marta.
We ate heartily, and it was as well that we had only a couple of miles left to walk. 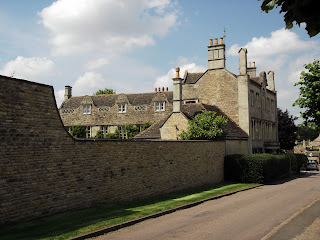 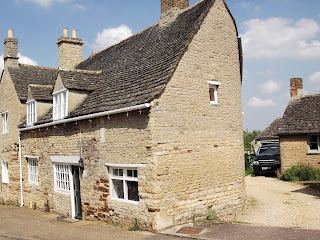 When we came out of the pub garden we turned along Church Street, past the footpath at Park Walk, as far as the church. The path now has three identities - Jurassic, Hereward and Macmillan Ways.   Shortly afterwards we turned right  and followed the path through fields and a small piece of woodland until we reached the railway - you're advised to stop, look and listen - though there's so much traffic noise from the A1 that the listening part is not easy.  Once over the railway lines you go underneath the A1.

We were close to the Welland again, and crossed it by Broadend Bridge. The path led us straight into Stamford Meadows, past the plaque at the spot where Boudicca/ Boadicea chased the Ninth Roman Legion back across the river in AD61. 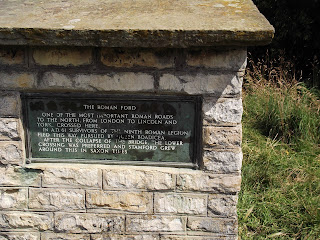 Time to drive back to Fineshade for a reviving and celebratory coffee, and we can say that we've walked the Jurassic Way.

Map and details
Posted by aliqot at 5:05 PM