Led by me with Barry and Gordon. Mostly fine, though we had a heavy shower. Underfoot generally good. Stiles awkward on occasions. 9 miles plus.
This walk came from here.
We took the road going west out of Ashby St Ledgers, crossed the A 361 and joined the bridle track which forms part of the Jurassic Way.  It climbs gently up south west until it reaches a minor road (Welton to Barby). Here we turned right and picked up the Jurassic Way again a few yards along the road, where it runs off to the left.  This track leads downhill, and we could see Braunston church spire and a sail-less windmill nearby. These disappear from view as the track descends and then rises again between hedges towards Braunston.  We entered the village at a bend in Ashby Road.  This road leads down to the central green near the Wheatsheaf pub. Here we crossed the road and took a footpath slightly to our left, leading downhill through Jetty Fields Park and then down to the Canal near Braunston Bottom Lock.


We walked along the canal, turning right, past the marina and lots of moorings. 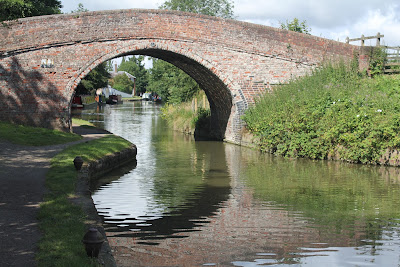 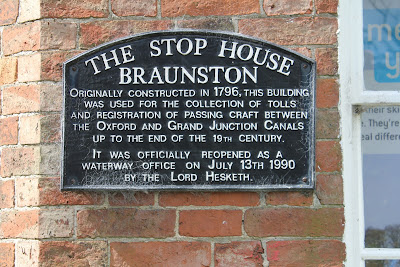 There is also a boat-café, called the Gongoozlers' Rest. Highly recommended by one of the boat-dwellers.

Just after the towpath took us under the A45, we left it, and crossed the road, then followed a footpath just beyond the bridge, and turned right up a grassy slope to the church.  Here you can either follow the road round behind the church, or walk through the churchyard.  We didn't look at the gravestones, but there are apparently a lot of boatmen and women buried here.


We walked along the main street for a while, and on our way back noticed this:
Then we returned to our route, and followed the residential street Greenway along, then took the fourth turning into Countryside (really).   The footpath heads more or less north. I think we missed the route after the first field, as we ended up on the wrong side of a hedge after a tricky stream crossing. Another time, I'll try aiming slightly to the left of the corner!

We walked along the edge of a large field of wheat, and manage to cross the hedge at the top, and find the real route.  This leads over a few stiles and passes a house at a distance on the left, then soon turns slightly to the left of Braunston Fields Farm. We crossed a field with some teenage bullocks, who were far more scared of us then we of them.  The path crossed diagonally and then led into a small wooded valley, taking us to the corner of Tiltup's Wood.

Here we crossed one field - a short uphill section, and then aimed for the one prominent tree at the top of the next field.  The path then crosses another field, and Camp's Copse (not marked on the map, though there is a sign inside!
Soon we arrived at the minor road leading into Barby. We turned left.  On our right we could see another sail-less windmill, this time in dire need of some attention.

We didn't go into the village, but carried straight on over the crossroads, and walked for half a mile or so before meeting the footpath from Barby to Ashby St Ledgers.  This turned right towards Ashby.  We crossed a field and then walked alongside Home Wood, as far as Briccle Wood, where the path turned right.  It runs parallel to a reservoir, but there are just a few glimpses through the trees.

We emerged from the trees and crossed a meadow and a track, but at this point the map told us to cross a section of woodland - there seems to be no way through, and there are path signs to the left of the wood, so that was the way we went.  The path headed south-east into a small dip and up again until it met the A361.  We picked the path up on the other side, and followed it as best we could coming out at a bend in the road just before the Manor House in Ashby St Ledgers. A magnificent building with quite a history, involving the Catesby family, the Gunpowder Plot, and later worked on in the early 20th century by Lutyens. 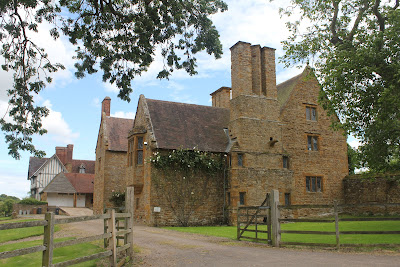 The gatehouse and the church are also interesting.  There is a little more info and a few more photos  on the post here, as we walked through Ashby when we did the Jurassic Way.

Thanks to Gary's blog - To the hills

map and details
Posted by aliqot at 4:16 PM

Thanks for the comment linking back to my blog pages. Cheers, Gary.