Thursday 14 February., a very fine day, with a film of fraost on the path to begin with, then beautiful sunshine.   With Eddie. Just over seven miles. We followed exactly the same route as on Monday 11 February as far as Uppingham. Same coffee stop at Javawocky.


We were pleased to note that the route was considerably less muddy than on Monday, and our route into Uppingham quite pleasant in the warm sun.

Approximately five miles done - not that our mileage apps ever agree! The coffee shop beckons.

We decide it's worth trying the footpath route today, and it turns out to be easier and less muddy than we'd thought. We started by going through the Uppingham churchyard with its flights of steps, then left and across the road to turn right, just past a new housing development.  Then it was uphill and through a short woodland section.
A left turn and very soon a right turn brought us to the smallholding. The animals were enjoying the sun as we passed by.

The path dropped quite steeply, then climbed again to emerge at Uppingham Community College playing field. It goes straight across, between tennis courts and football pitches, then over two or three fields and downhill to the road between Lyddington and the A6003.

This section has three or four stiles. Many stiles have now been replaced by gates, but not these. The views of Lyddington and the rolling countryside were excellent today, if a little misty.
We crossed the road at the bottom of the slope and took the path opposite. This goes behind the village, running parallel to the road. There was a very wet patch in the first field, but our boots held out and kept us dry. 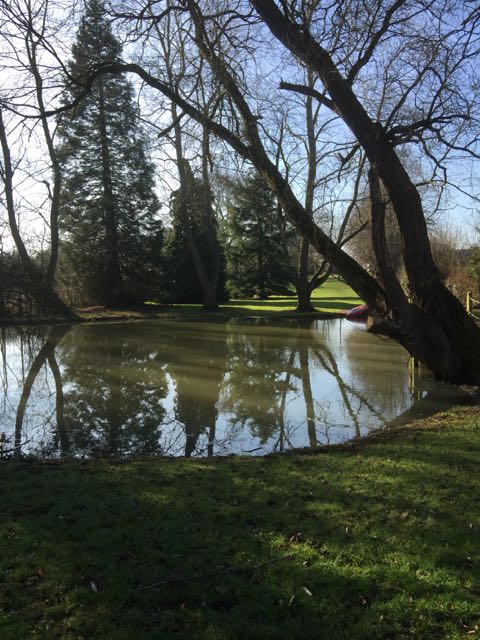 When we met our outward route we continued along the track and into the village.

The elevation profile looks impressive, if you don't read the numbers!!
Posted by aliqot at 3:42 PM

Lovely to see the animals enjoying the early-spring sunshine even if it does add a bit of early-morning mist-ery! There's that feeling that winter is slowly letting go.

Such a lovely day! Thanks, Ida.