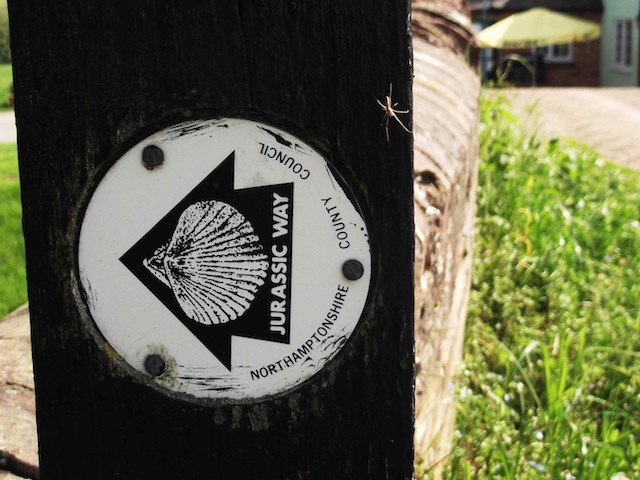 With Marta. 11 miles. Very hot. It felt like hard work. Dry underfoot apart from under the M1. 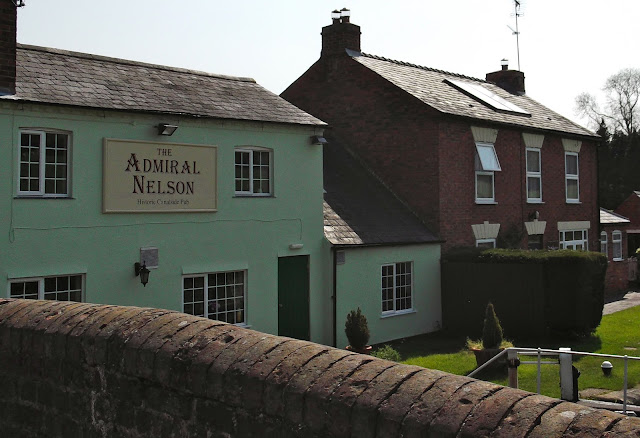 We started from the Admiral Nelson, crossing the canal to the towpath, and following it as far as Braunston Bottom Lock. 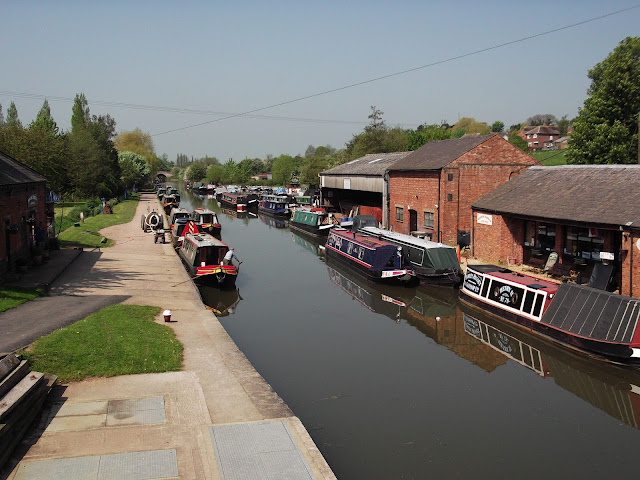 Here we crossed the bridge and made our way uphill - there are a couple of footpaths, and more by luck than judgment we ended up, as we should, going through Jetty Field Pocket Park, past the allotments and into the village, at a road junction.  Just by the Wheatsheaf Inn, take Ashby Road to the right,  follow it until it bends to the right. At this point the old road is now a track leading straight ahead - towards Ashby St Ledgers.


The track narrows to a path, and climbs up to a minor road. Here we turned right and walked a short distance before turning left, in the same direction as previously.  The path goes downhill to the A361, which we crossed, then followed the main street of Ashby St Ledgers through the village, until it bent left just before the church of the Blessed Virgin Mary and St Leodegarius. 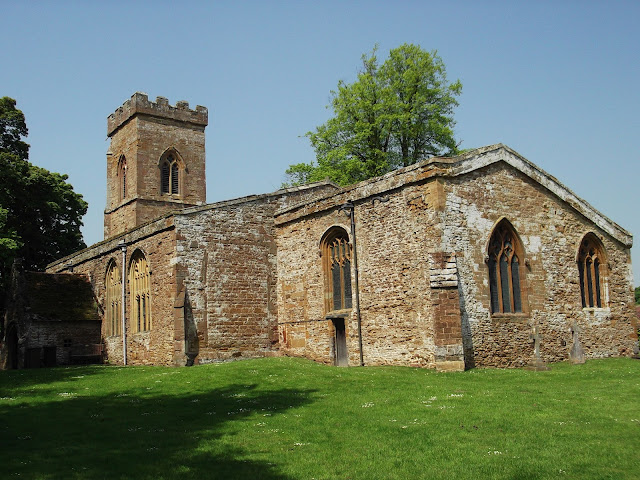 As well as some very attractive thatched cottages, the village has a Manor House, which was worked on by Lutyens, in the first third of the twentieth century. 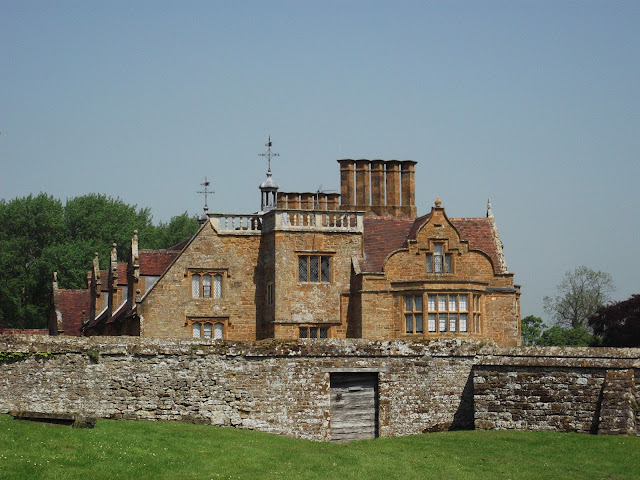 Its gatehouse was a meeting place for the Gunpowder Plot conspirators, including Robert Catesby.
The Jurassic Way continues straight ahead from the bend in the road, by the church.
We were in need of a break and a snack, but first we crossed several open fields before finding a suitable shady tree.  After this we headed across more fields slightly downhill towards the M1 and the mainline railway of Watford Gap.
There's a bridge under the railway, but you have to cross the A5 - fortunately it is not too busy. 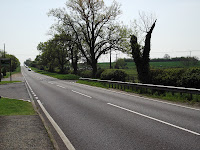 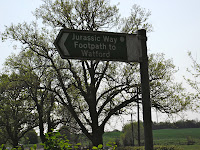 The path took us over the canal and up the towpath past the flight of locks and marina. A lovely oasis, spoiled by the noise of M1 traffic. 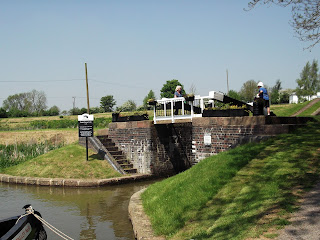 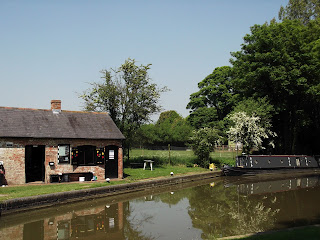 We crossed a field making for the tunnel under the M1. It smelled and felt rather as though cows had sheltered there - the wettest place for miles. 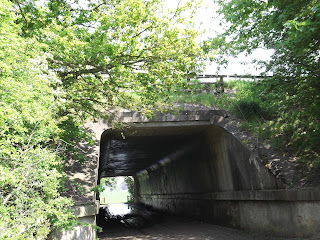 We followed the footpath into Watford, where we turned left along the main road, uphill as far as Church Street. Another left turn took us to a junction where we turned left, then right just past a barn, where wagtails alighted on the roof and swallows were flying around.
The path goes across some parkland, and makes towards Henley's railway bridge, which the then owner of Watford Court built so that the railway would be at a distance from his house. Watford Court was built in Elizabethan times, and demolished in the 1970s.
The path is generally well marked, but we did need to consult the map a couple of times - for reassurance at least.  Most of the time it's a case of following the paths. There are a few places where a way mark would come in handy, for example when the path (clearly restored through a field of crops goes diagonally across a field, then zig-zags round field boundaries. This is marked on the map as near Flavell's Lodge, though we couldn't identify any building.
You come to a cross paths (crossroads for paths) where you take the right hand path past Silsworth Lodge - this can be identified.  The path goes round the buildings, turning north briefly before going east towards West Haddon, and entering the village near the primary school. The path goes along a short street named The Green.
Turn right, go to the mini-roundabout, and turn left up High Street. Take the next left, Crown Lane, or walk through the churchyard.  At the top of Crown Lane the path for Winwick leaves.
We bought lunch in the local shop, though there are a couple of pubs as well. Faced with the choice of sitting on a bench in the sun, or grass in the shade, the shade won, easily. 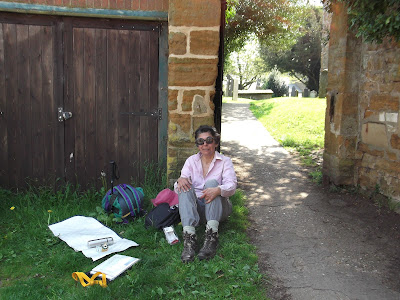 The final section was pretty straightforward, following the signed path north through fields and under the West Haddon bypass (A428). 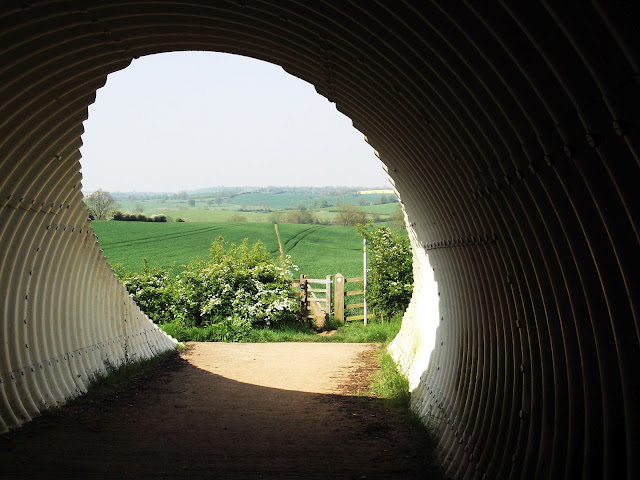 The path arrives at a surfaced track near Glebe Farm. Follow this and turn right on the gated road which leads all the way to Winwick.  We turned right at the crossroads in the tiny village and walked uphill past the Hall to the seat by the pond where we'd left the car. 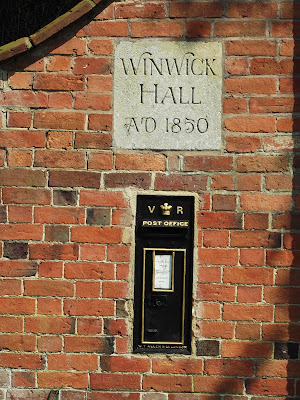 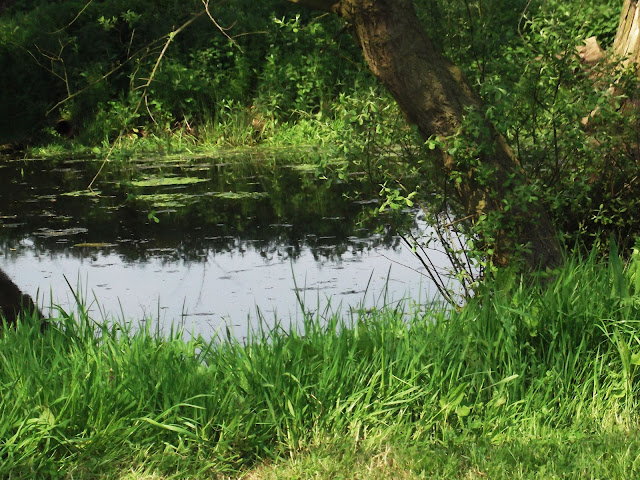 Thanks to Northants CC leaflet - available only online as a PDF, alas.


Map and details
Posted by aliqot at 7:39 PM