Thursday 28th March, with Maureen and Eddie. The same walk as last Thursday, but in reverse. About 8.5 miles. Fine and warm once more.

From Harringworth village centre we walked a short distance along the road to Wakerley, then turned left to the path through the field near the stables. We followed it to the Welland, and walked with the river on our left as far as Turtle Bridge. 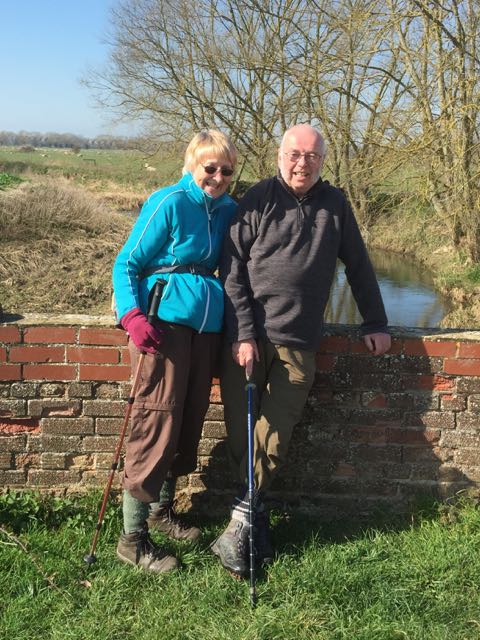 Here we crossed the river and continued our walk along the field edges before heading diagonally to the left, and slightly uphill into Barrowden, through a field of sheep and lambs. 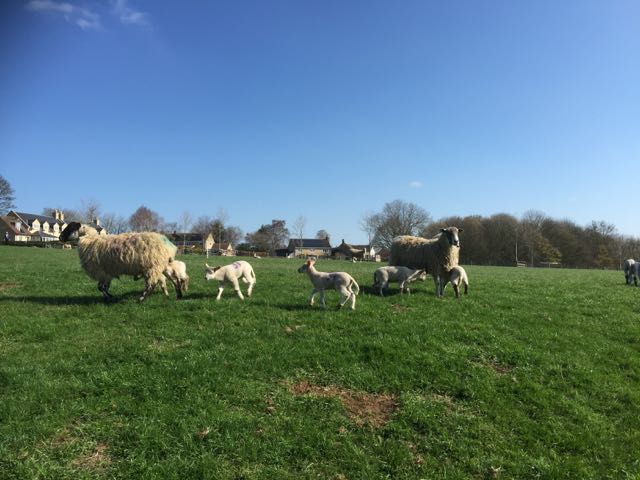 We followed Back Lane and eventually reached King Street and the Commnity Shop and cafe. Almost 3 miles, so it was an early break for coffee. 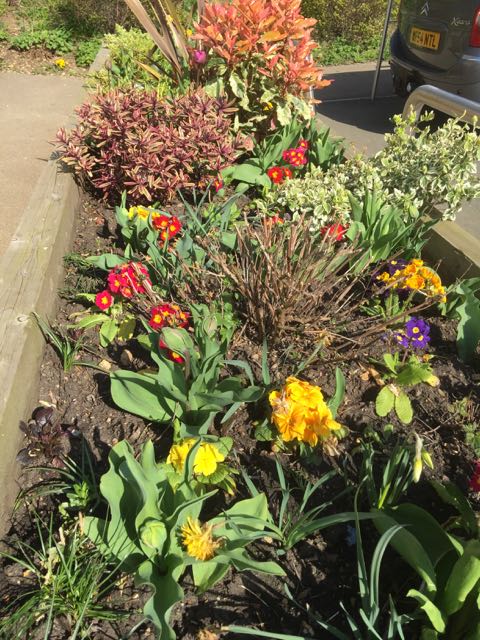 Out of Barrowden via the village green and duckpond. 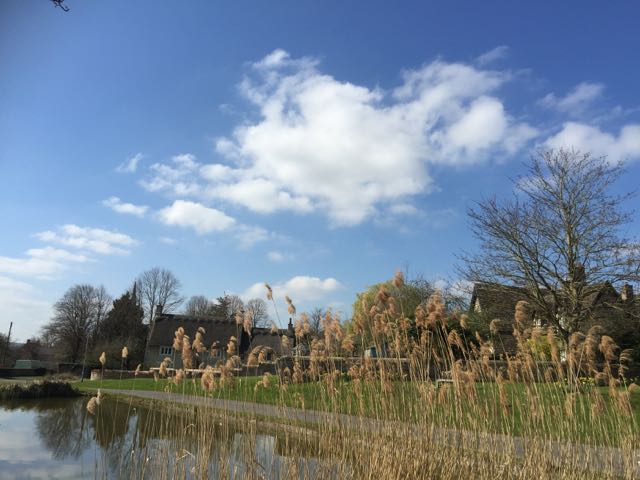 There was an uphill stretch along the road towards the windmill, just before the A47, which is easier to cross from this side of the road! 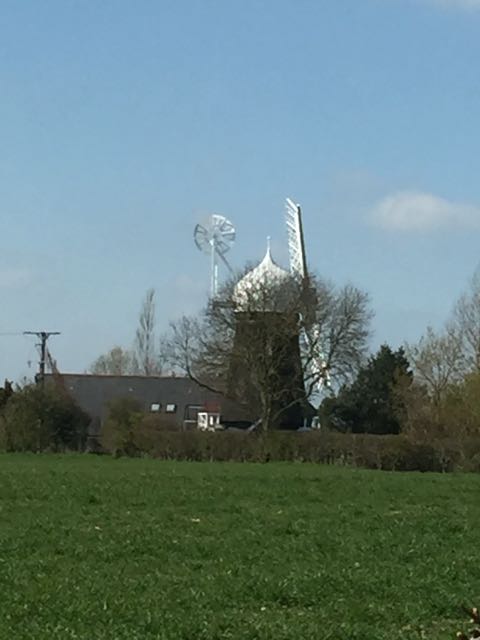 Through a short woodland section with plenty of violets underfoot, then across a recently ploughed but smooth and dry field.
Down a flight of steps, and across the A6121 and through part of Morcott village, until we met the waymarker indicating our footpath, along Mount Pleasant Road. This soon leads into a field. It goes slightly uphill and before too long back to the A47, close to the petrol station complex. We crossed and took the path directly in front us. Another ploughed field, but again dry and smooth, and going downhill, with good views around.
At the bottom of this slope we turned right and followed the yellow posts as far as the railway bridge. Under this and we turned left then right for a short steep climb up to the road to Seaton.
In Seaton we paused for a rapid drink, sitting in the sun outside the George and Dragon.
Our route took us down church Lane and past a few houses, then downhill with views of the viaduct, across a disused railway line and across the minor road. Through a small gate and along the drive of the very impressive farmhouse. The path goes round the house, and over a wooden footbridge, before heading across fields towards the Welland, and over the river, then left under the viaduct and back into Harringworth, via the churchyard. 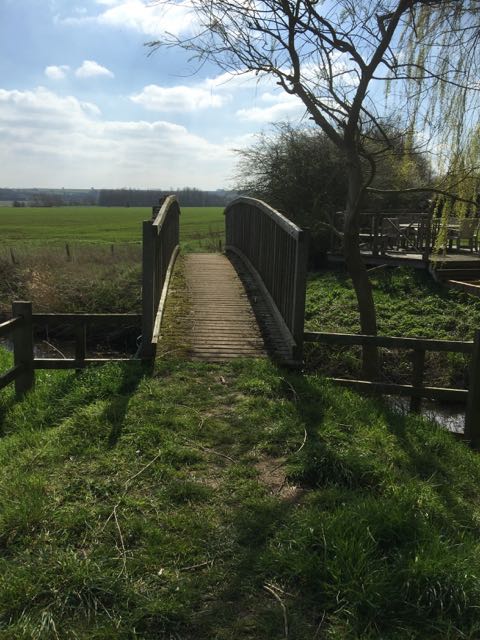 Lots of daffodilas and spring flowers in the villages. Celandines, violets, primroses and blackthorn in abundance.
Tortoiseshell and brimstone butterflies.
Lunch at Lydia's cafe, Gretton. 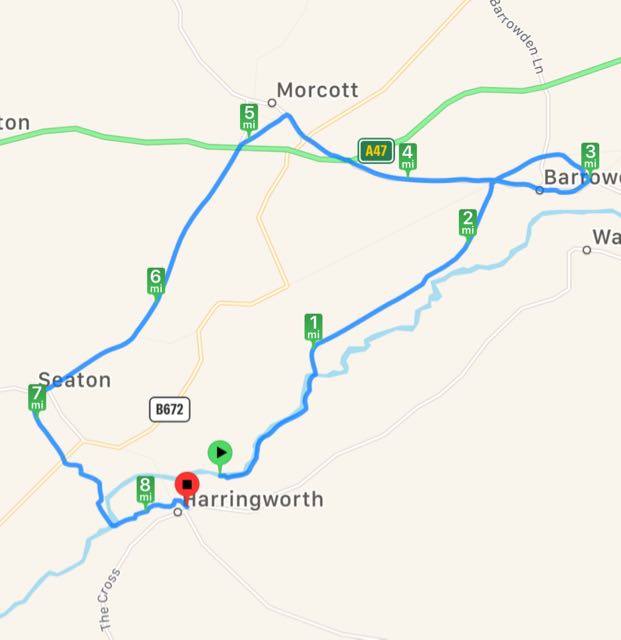 Posted by aliqot at 4:58 PM No comments:

Plans certainly went aglae today. The gods of the roads were determined to thwart us - road works and diversions and then gridlock! Luckily a nifty left turn allowed us to escape - not to the destination originally planned, but hey, we can improvise!
After a coffee at Asda, and then a "nice drive in the country" we decided to walk from Wing. It's a walk I've done a few times, and new to Marta, so - no problem. A later start than usual, around 11am.

Here's a slightly longer version of the walk, from about a month ago!

We set off from Glaston Road, by the turf-cut maze in Wing, according to the info board one of only eight which survive in England. 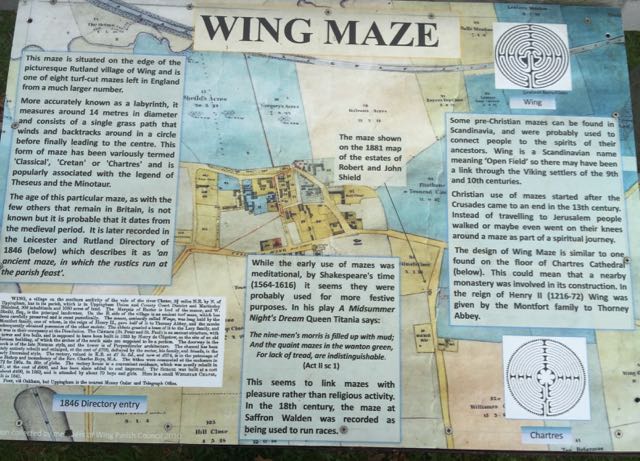 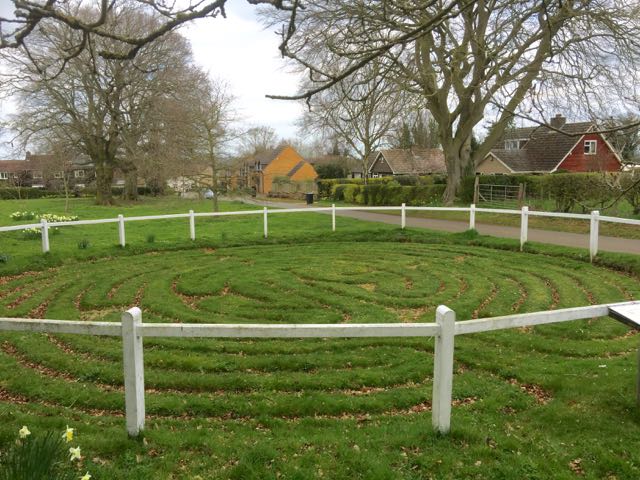 From here we turned right along Morcott Road and took the first turning on the left, which is a bridle way. This took us downhill and north over the railway line and the river Chater. 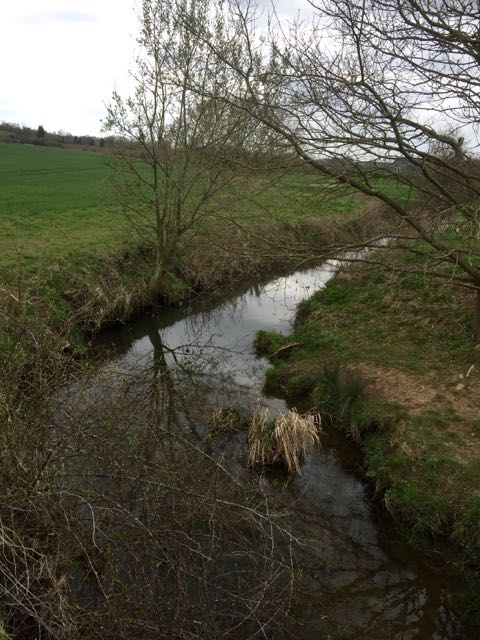 Along the track uphill to the main road the blackthorn bushes were blossoming. 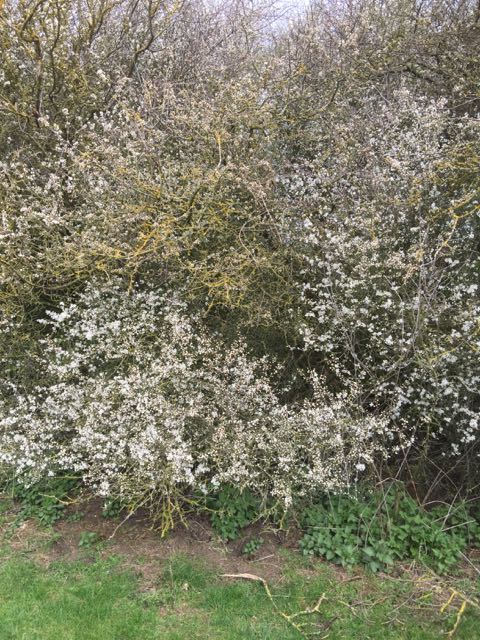 We crossed the main road and took the small road directly opposite, past the campsites and down towards the Manton Visitor Centre.

From there we turned right along the waterside track, and continued by Rutland Water as far as Edith Weston Sailing Club. Instead of following the cycle track signs we walked up the road past the school, towards Manton Road, turning right along the path near the houses. We had a brief break in the bus shelter. 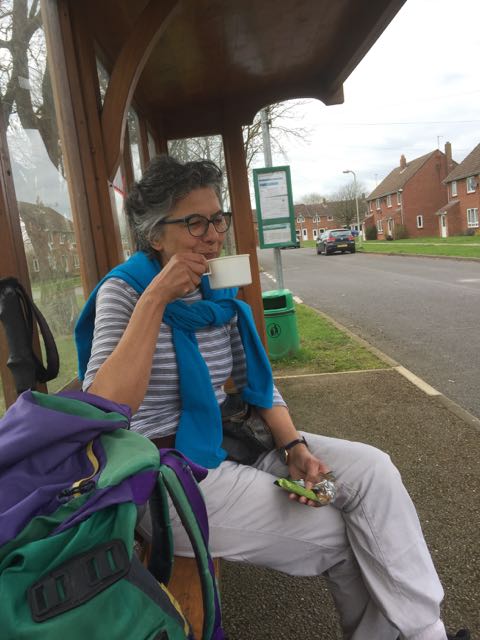 At this point we walked along the roadside verge as far as the left turn towards Lyndon. We walked down this minor road, and turned right at the junction into the village. 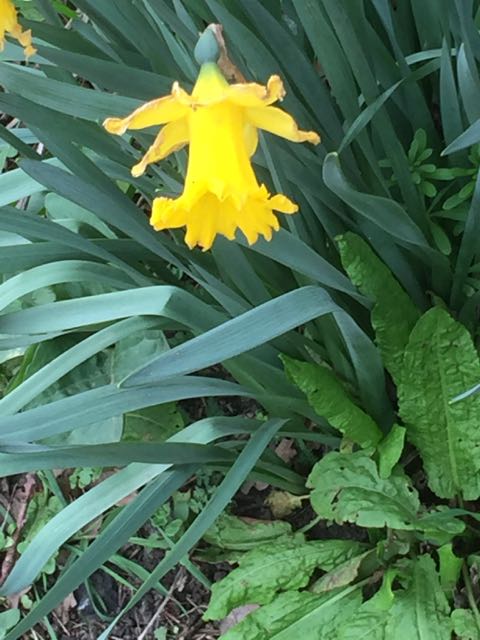 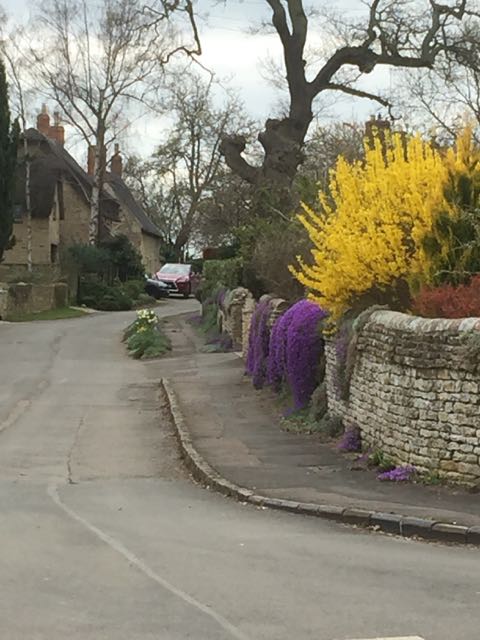 At the signpost, with a bench over the road, we turned left and soon found our footpath to the right which leads past Lyndon Hall. 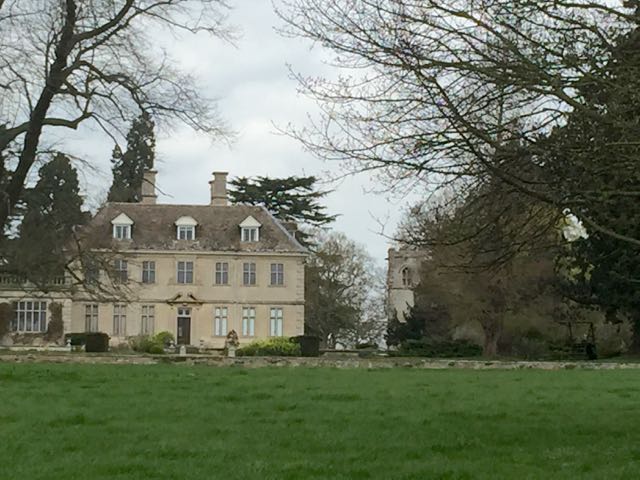 The church is just visible behind this, to our right.

The path takes a zig zag route along field edges, then joins the bridleway near the Chater. It just remained to walk uphill to the railway line and back into the village of Wing. 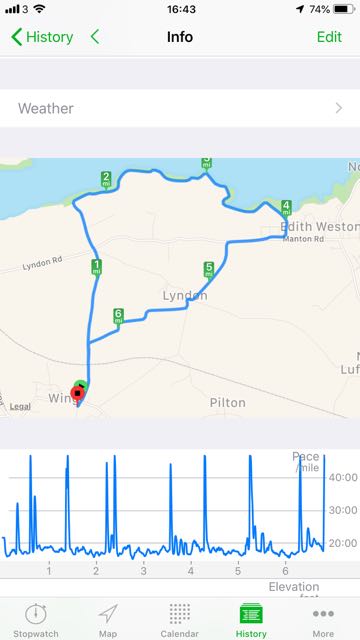 A late lunch at the Orchard Cafe at Welland Vale Garden centre completed the day.
Posted by aliqot at 5:39 PM No comments:

Monday 25 March 2019, with Norma, Marion, Kate, Maureen and Eddie. Six and a half miles. Glorious weather, though the wind still had an edge to it. 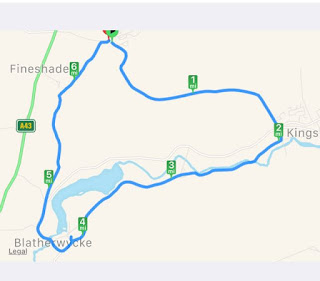 From Fineshade Top Lodge to Kings Cliffe, past the allotments. 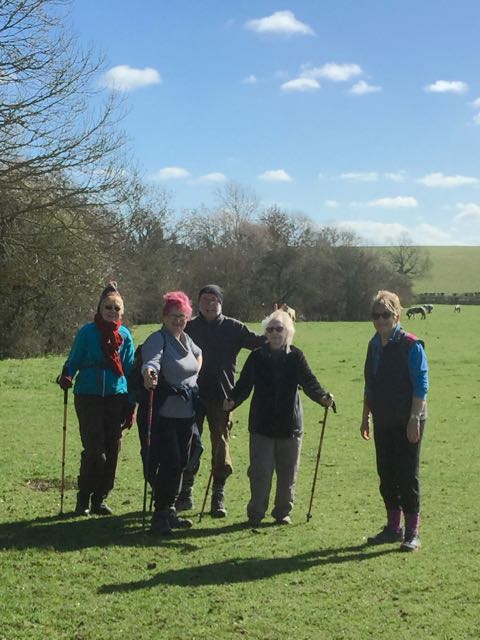 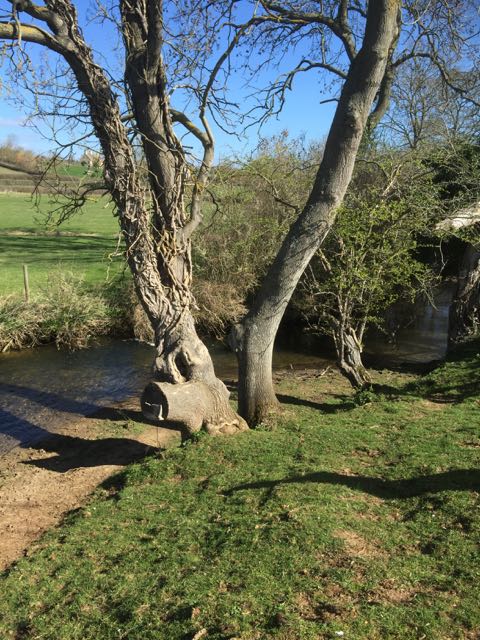 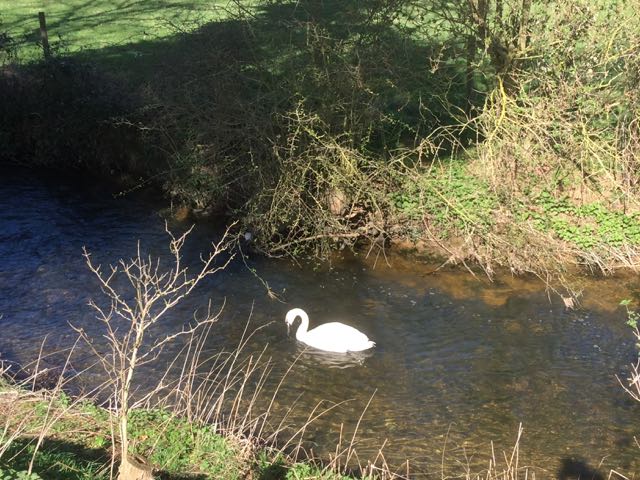 We continued following the Willow Brook, on past Alders Farm and to Blatherwycke Lake.

A pause for snacks at Blatherwycke church with its lovely spring flowers. 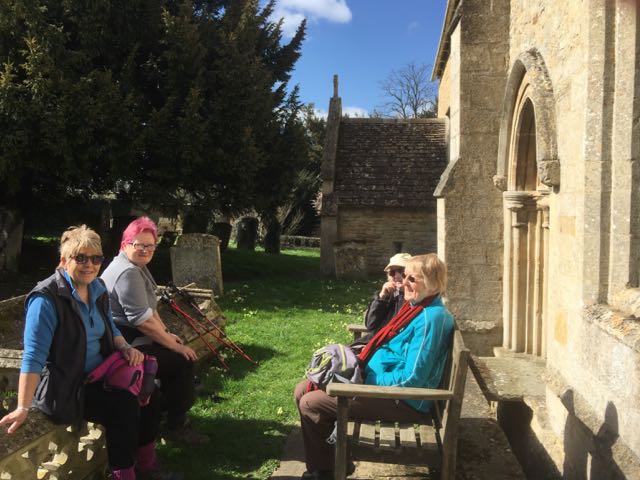 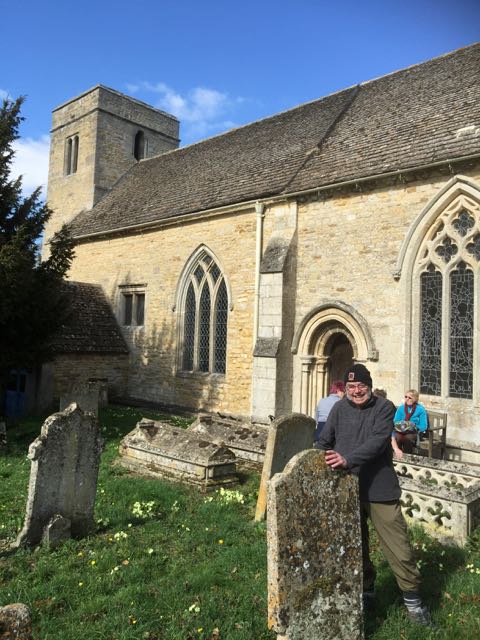 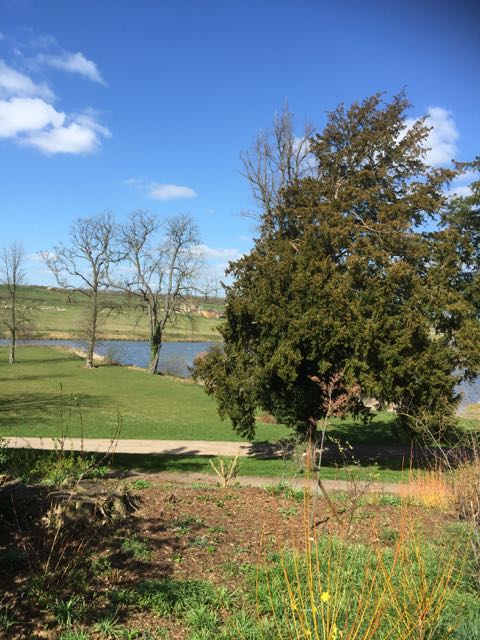 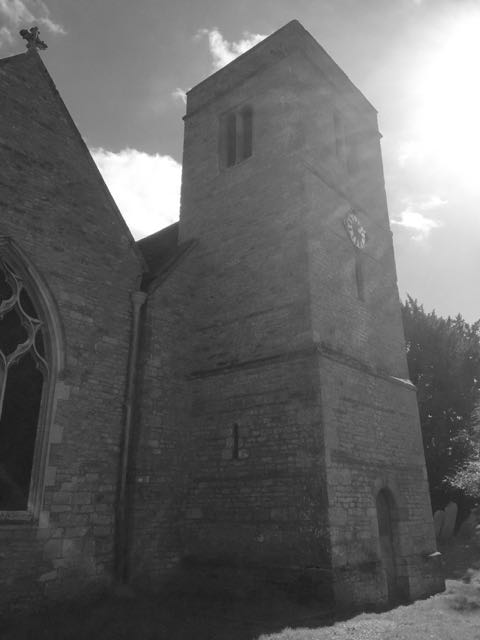 Then back to the track, turn right at the road and walk over the bridge, and past the houses   as far as the second road to the left. Take the path from the junction across one field, then keep the hedge on the left - good view of the lake to the right.

At the next field turn slight left, heading almost due north, through a gate. Aim for the corner of Lynn Wood and drop down to the junction of paths. We join the Jurassic Way here. Keep straight ahead aiming for the big house. There's a statue of a stag over to the left, which you can see as you gain height. The path climbs up and there's a stile before the path is enclosed between fences for a while.
A short stretch of open field then another stile and into the woods, climbing gradually. As you come out of the woods there's a large field which dips down then climbs again to join the roadway up to Top Lodge.

Lunch at the cafe, sitting outside in the sun!

Thursday 21 March 2019, with Eddie. Around 9 miles. Fine and quite warm, with a small amount of mud.  Fine views of the viaduct, twice with a train crossing. Coffee and teacakes at Barrowden Community Shop.
We set out from Harringworth, close to the cross. We took the Wakerley Road for a few yards, walking down past the stables, and through the churchyard, resplendent with blossom this morning. 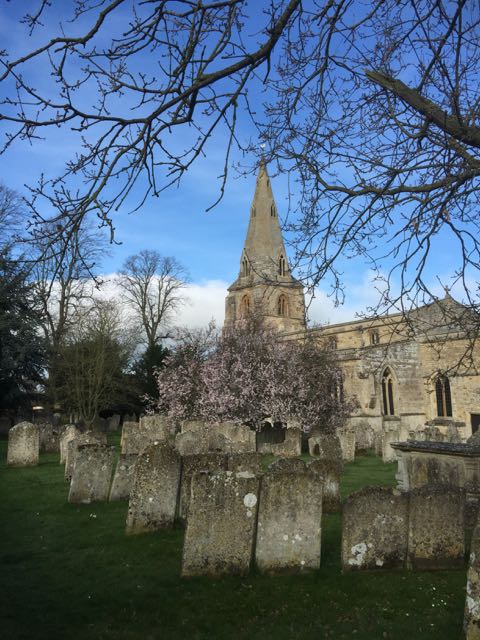 At the road we turned left for a few yards then took the footpath alongside the houses, to the right. We followed the path turning right rather than left to the village Hall. It goes along to the viaduct, but is a bit tricky to find in places. At the viaduct we turned left and went through a gate, then across the field making for a footbridge over the Welland. Across a couple of fields, the second one quite sticky. We were wiming for a footbridge to the right of the large farmhouse.
The footpath takes you round this house and on to the drive and the road. We crossed the road and took the steps up and over the dismantled railway, then onward to Seaton.
A flock of sheep and lambs appeared to think we were good shepherds,  and followed us enthusiastically across one of the fields - alas they were disappointed.
We passed houses and the church in Seaton, turning right at the next road. We walked past the pub and took the road signposted to Morcott and Barrowden. Just before a bridge we took the footpath down into the valley, leaving the gate to the railway on the left. We came to the bridge under another dismantled railway. 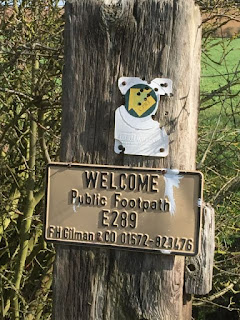 We kept the railway track on our right, and made our way along field edges (avoiding more ploughed land) up to the A47, not far from the motel, petrol station and cafe. We crossed - it's busy - then took the footpath northeast from the road junction near the motel etc. and into Morcott. We turned right along the road to the junction with the A6121 from Stamford, and crossed it to the footpath heading eastish. We skirted the field to avoid more mud, went through a short stretch of woodland and came out at the A47 close to the junction with the Barrowden Road.
After this it was simply a matter of walking downhill to the village and finding the Community shop and cafe for a welcome coffee and teacake. We probably stopped for half an hour or so, before making our way back out of the village, past the pub, the village green and the duckpond, along Seaton Road for a few yards, then turning left and finding the stile to join the Jurassic Way, which we followed across a couple of fields, then close to a dismantled railway. We turned left and downhill to Turtle Bridge and the Welland. 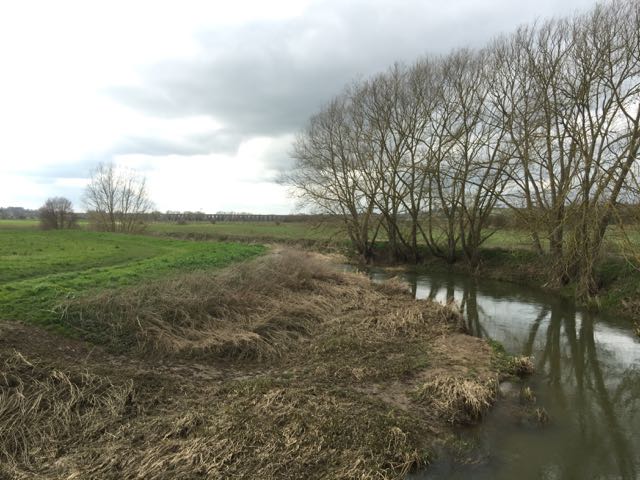 We turned right to follow the river as far as the field with horses, which we crossed to reach the road where we had parked. 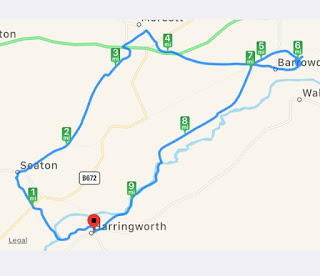 I can't resist posting the charts for pace - mostly just over three miles per hour - and the elvation profile, which makes it look as though we have scaled mighty peaks!, 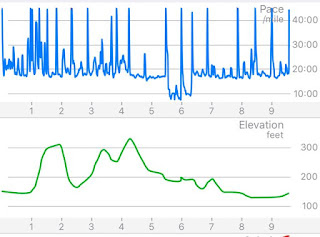 A warm day, with little wind. Ideal for walking the same route as on Monday 11th March, but with Marta this time. once again, about 8 miles...though I managed to stop my mile counter in Great Oxenden Tunnel, while trying to access the torch on my phone. Had forgotten to pack the head torch this time! Ho hum.

A short early coffee pause in Arthingworth, which has a few public benches, then up to the trig point.

Then on past Waterloo Lodge Farm, where they are doing some work on improving the footpath. We had a short chat with (I guess) the owner and his dog.  Waterloo Farm for another hot drink and a sandwich, eaten outside today!  Yes, I admit we put our outer layers on.

The last stretch was the two and a half miles south along the old railway track, the Brampton Valley Way, through Great Oxenden Tunnel.  (418 metres long). 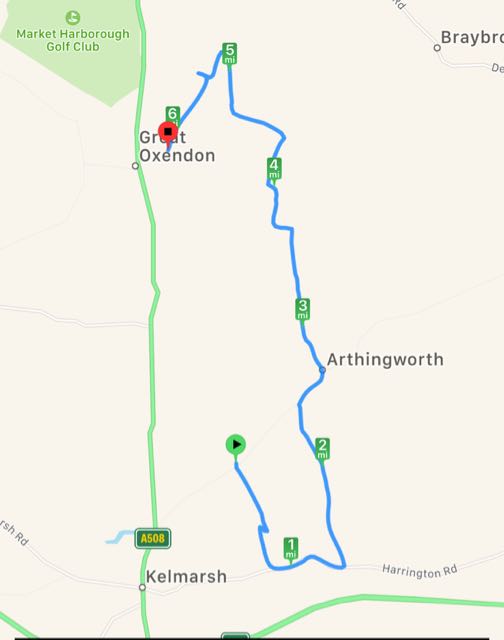