Same walk as April 6th.  No snakes this time, but a red kite and a heron.  The daffodils are over, as is most of the blackthorn, but the bluebells are in evidence on woodland edges.

Looking at the Garmin info on computer, there is a gap of a few hundred yards in the middle. Could explain discrepancy  with other machine!
Posted by aliqot at 3:06 PM No comments: 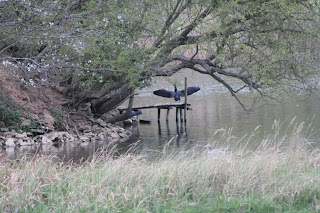 Friday 15 April.  4.7 miles there and back. A little detour on a path up to the right just after the lake (coming from Gretton). 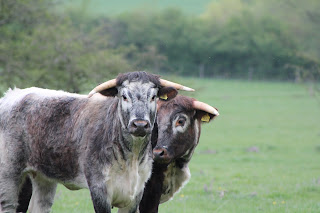 Quite fast, took camera for a few pics in spite of grey weather. But not able to upload them until I install the software.
Posted by aliqot at 6:41 PM No comments:

Email ThisBlogThis!Share to TwitterShare to FacebookShare to Pinterest
Labels: 5 miles and under, Northants

Along the canal from Foxton Locks 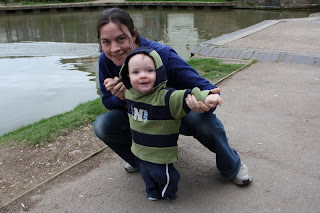 Wednesday 13 April. With Harry, Esther and Joseph in the buggy.  6.37 miles according to the new toy, at an average speed of 2 miles per hour - strolling,, taking pics etc

Chilly wind day.  Large amount of cheese in the ploughman's at Foxton Locks Inn!
Posted by aliqot at 12:57 PM No comments:

Monday 11 April 2011.  With Gordon S. Another Mel Jarvis special.  I took a slightly different route from Gretton village to the footpath along the Welland, following the path through Church gap, signposted to Thorpe by Water, over a field with young and inquisitive bullocks, across the railway line and the fields, and then the farm track under the line of pylons to Mill Road and the footpath in section 2 of the walk.

Another fine day.  I heard some piping birds ( could they be peewits or curlews? - the information board shows both).  8 miles, in about 2 and 3/4 hours, including a short coffee and banana break.
Posted by aliqot at 6:52 PM No comments:

A newly serviced bike, a fine day, not too much wind - what could be better? Daffodils in the hedgerows are fading now, a few cowslips are in bloom.  The blackthorn is turning green as the year moves forward.  We heard buzzards mewing in the woods, and watched them circling.

Last Friday we did a mini-ride - Rutland Water, Normanton to Barnsdale Woods, where the bluebells are just beginning to come out, then back.  An encounter with homo Nottinghamiensis, who was honour bound to grouse. 'I hope your drink's from the fridge.'  ' This ice-cream's expensive - mint - should be dark chocolate though.' I hope he got some decent photographs for his trouble, and caught the train back from Oakham.
Posted by aliqot at 3:30 PM No comments:

Email ThisBlogThis!Share to TwitterShare to FacebookShare to Pinterest
Labels: cycling

Followed the route exactly - in the first section , the playground has now moved further up the playing field, and after the stile the path goes between the old houses and the newly built ones.

In section 2, the path leading to the corner (the angle of the L of the L-shaped field) goes slightly right, as indicated by the footpath arrow.

In section 4 and 5 there's a notice advising you to keep dogs on leads, beware of snakes. Today, although it was fairly sunny, I saw none, though there are one or two corrugated iron sheets which could be places where they hang out.

As Mel warns, there is a longish section along roads, but the walks at either end of it make it worthwhile. I met someone who had brought his bike across from Gretton to Rockingham.  I wouldn't advise it, though it's certainly possible with conditions as dry as they are at present.  But there are a few stiles and tight gates to negotiate.

Map and details   same route as Thursday 2 February 2012
Posted by aliqot at 2:43 PM No comments:

Wednesday 6 April.  With Harry. About 6 miles - 2.25 hours.From car park at Top Lodge, go back past the entrance, and turn left, following the main track. Keep straight on past the Westhay Wood sign, ignoring all turns until you reach the wood yard above King's Cliffe.  Follow the road downhill to the village, and cross the main road.  Or you could call at the shop a couple of hundred yards to the left if you need supplies.

There is a path parallel to the main road, between it and the Willow Brook. Follow this p[ast allotments, and through a couple of fields until you come to a footbridge. Keep the stream on your right until you reach Alders Farm - the path is clearly marked.  You have to cross a ploughed field at this point, then keep along the hedge until the path divides. Follow the left-hand branch through the break in the hedge and along to Blatherwycke Lake.

There are plenty of 'Private - Keep Out' signs to keep you on the straight and narrow, although glimpses of the lake and a statue high on the hill at the possible site of Blatherwycke Hall could tempt the less law-abiding to stray. The Hall was used by the armed forces during World War 2, and an interesting episode is related by the daughter of a Polish airman who was stationed there:


Antoni was stationed with the P-panc at the Georgian-style Blatherwycke Hall, where all of the Battery’s training in the use and maintenance of 6-pounder guns took place. The Hall stood near an artificial lake into which the stream of Willow Brook ran down from the village and under a sand-coloured stone bridge. The grounds had a walled garden and the medieval church of Holy Trinity stood nearby. It was an idyllic slice of England and my father loved it. The Poles also had one-up-manship on other Allied troops in the area: they discovered a stash of wine and port bottles in a tunnel that led from the Hall directly under the church. Apparently the British never did work out how the Poles could merrily get drunk without leaving the compound.

A rather fine building and the church lie to the left of the path.  The path itself leads to the southern end of the village of Blatherwycke.

You walk along the road - you may like to pause for a break at the bridge, or on a seat just the other side.
You walk on, past Glebe Farm, and at the second turning to the left the footpath follows the line of the approach road and again is clearly marked across three fields, and follows the edge of a fourth round to the corner of Lynn Wood, where it joins the Jurassic Way from Wakerley Woods.

Fineshade Abbey stables come into view, and you take the path uphill towards a small building, climb the stile and follow the narrow path between two fences - with views of the ornamental lake, complete with a platform with Adirondack style chairs.

Follow the well signed path across meadow, into the woods and finally through a ploughed field until you reach the road from the A43 to Top Lodge.

For details of the route via Garmin
Posted by aliqot at 3:52 PM 1 comment:

With Phil, Barry E, Jill, Sue, Gordon, Maureen, Terry, Steph, Carole and Ian.  Monday 4 April 2011.  Following the edge of the woods in a clockwise direction, but accidentally missing out the part round Fineshade Abbey...almost exactly 5 miles in all.

From car park at Top Lodge, go back past the entrance, and turn right between the coach park and the caravan site. Follow the 'road' downhill. You meet the Jurassic Way signs and follow them round to the timber yard and fancy house. Take the road towards King's Cliffe and turn right along a footpath (via gate or stile) next to the disused railway line.

I made the mistake of turning right along the railway line instead of crossing over as I should have done. You still end up at Top Lodge in the end, but miss the abbey. Mea culpa!
Posted by aliqot at 1:36 PM No comments:

Email ThisBlogThis!Share to TwitterShare to FacebookShare to Pinterest
Labels: 5 miles and under, Fineshade, Northants

Friday 1 April.  With Esther, who had 9-month-old Joseph in the back carrier - quite a weight.  Along the Jurassic Way. One of my favourite very short walks which includes a fair amount of up and down, several stiles, woodland and open countryside. Goes across a field on the road up to Top Lodge, thorugh woodland, then pasture fields past Fineshade Abbey Stables and down to the main road. Fineshade Abbey's main building was demolished in 1956. Some of the history can be read here. Only downside is the need to cross the A43.
The path continues on the other side, leading towards Laxton Hall.  After a hundred yards or so, at the field boundary, turn right - the path is clearly marked crossing another stile, and another field, then over yet another stile into Wakerley Woods. The walk takes about one and a half hours - a good one at bluebell time, or on a summer evening.  Cafe at Fineshade Top Lodge, though it closes at 4pm in winter.
Posted by aliqot at 5:49 PM No comments: