Rumours of rain on the way. Someone mentions snow.  I hope we've already had the morning's promised shower.  We set off from Barry's house, through the new streets of the Snatchill area, turning right from Windermere Drive across a mud-bath field to a fine graffiti decorated footbridge over the railway.  Waterproofs on for a while, but it's hardly worth the effort. We turn slightly right, skirting South Wood.

We follow the edges of fields and join the minor road to Little Oakley. A turn to the left takes us towards the village, and we turn off left again just before the first houses.

We must be walking further than planned in the next section. When I look at my Garmin map, I see we had to walk two sides of a triangle, or three sides of a square, simply to avoid the worst of the muddy ploughed fields.  No matter, we make it to and across the A43, and walk alongside the woods towards Geddington Chase.

The sky glowers at us, dark grey. "Quick, let's take a break before we're soaked!"  No arguments about that.  Maureen's scones go down a treat.  Next time we look up the sky is blue again.


On we go up past the house in Geddington Chase - there seems to be just one dog in the kennel today, and it looks friendly - for a guard dog.

We head north then north east following the path over fields and bogland to Stanion. 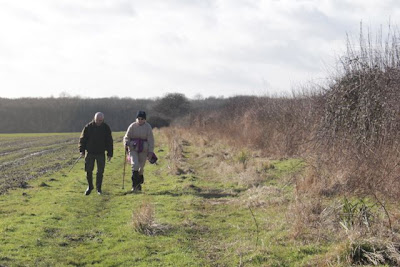 We turn left and take the road through the edge of the village to the A43.  Luckily this road has a wide grass verge, and we walk to the roundabout, and turn towards the Euro-hub.  There's about a mile and a half of road, fringed by litter-infested hedge bottoms, before we turn off by the Wincanton distribution depot.


There's a section of Roman road marked on the map. We pay our respects,  then turn right and slide and squelch our way along the path by the railway.
It's hard work, but we soon arrive back at the graffiti-covered bridge, and retrace our steps, fighting against the wind, to our starting point.

Map and details of the route
Posted by aliqot at 3:10 PM 1 comment:

Led by Barry, with Maureen and Gordon. Fine, chilly wind, muddy underfoot, some ice. Just over 10 miles in all.

Such a beautiful morning as I drive past the Welland Lake on my way to Hallaton.  I haven't seen the valley so flooded for a long time, but with the sun sparkling on the water, I could live with it.

The roads are clear of snow, but some glisten with hoar frost, especially the higher roads near Eyebrook reservoir, and through Horninghold towards Hallaton.  I shall probably keep regretting that I didn't stop to take photographs.

I meet the gang in Hallaton, and we brave the cold wind and set off along the Horninghold Road. We turn left along a footpath which runs across fields, almost parallel to the road. When we reach Horninghold village we turn right and then left just before the Hall, which looks as though it has converted its stables into rather exclusive apartments.

The route takes us northeast as far as Muckelburgh Farm,  where we turn to the left and head due north until we meet Allexton Lane, which is more like a mud-track.  We discover a body behind a hedge - his legs are plastic pipes, and his body is just old clothes - a scarecrow taking five?

At the Hallaton road we turn right towards Allexton.  Belton is clearly visible behind Allexton.  Before reaching the village we take a bridleway to the left, due west,  more or less parallel to the A47.  It crosses the stream and arrives at the main road at a lay-by.  We cross the road and find the footpath a little way to the left.

We take  shelter behind a hedge and indulge in a snack break.  We plod on and are faced with four yellow posts to show the way.  A quick look at the map and we make our choice. All is well, apart from the mud-hopping we need to do each time we meet a gate.
When we reach a road into East Norton we walk down it - past this rather strange character in a window

and an irresistible bench.
We have to cross the A47 again,  taking the old road to cut a corner, then along the road towards Hallaton for a short distance.
Decisions!  Do we continue for two miles along the road, or do we turn east along a wide track which follows the ridge?  We take the consensus, and the track wins. At this stage the wind is getting stronger and there's rain in the air.  But we carry on boldly going. There's a junction - a surfaced road leads down to a farm, but our route goes ahead - across more mud.  We arrive at a farm, labelled as Fearn Farm on the map. It has an obviously non-functional sign saying "Teas" and a sign declaring in German that it's a Zollgrenze or customs frontier. No one inspects our luggage or passports, so we carry on our merry muddy way.
We're following the route of the Leicestershire Round and the Macmillan Way here, but these fields are the muddiest yet, and sticky to boot. We have another snack break on the bridge over the dismantled railway, before tackling the last field, and joining the road near Hallaton Recreation Ground, walking past the duckpond and the Fox pub and we've done about 10 miles.


Map and details of the route.
Posted by aliqot at 4:08 PM No comments:

Two miles through the snow

Along the snowy "dusty"

Email ThisBlogThis!Share to TwitterShare to FacebookShare to Pinterest
Labels: 5 miles and under, Gretton


Led by Barry, with me and Gordon. Across fields and along tracks. Early sun, then cloudy but dry. Snow underfoot and most mud well frozen, apart from a boggy patch near where we crossed the Ise in Desborough.  8.5 miles approx.


We set off along a footpath from the road out of Rothwell towards Rushton, just after the bend where Shotwell Mill Lane goes to the left.  A few yards further on the footpath sign indicates the path, which crosses the field to the middle of the opposite side.

It continues diagonally over the next field, then takes you over a stile and follows the  edge of the field. Over another stile, and we turn right, following the hedge to the corner, and then round to the left.  After this and another field we cross the Ise, via a decent bridge. Then uphill to the road from Desborough to Tresham’s Triangular Lodge.  We don’t turn right to visit this, but carry on and over the railway. The path leads uphill again and we soon reach the road from Pipewell to Rushton.

Here we turn left and follow the road past Hilton’s End Spinney to the lane towards White Lodge Farm.  This lane crosses Pipewell Road and carries on in the same direction until it peters out. We cross a small field to join the roadway round Pipewell airfield. We turn left, past a building used by lorries and go as far as another left turn, by some concrete blocks, along a footpath leading south west, then south to Desborough.

There's a relatively new development of houses, where we follow a path across a park and a wooded cutting, before meeting the Pipewell Road into Desborough. A left turn takes us to the railway bridge. We cross this and turn left along Rushton Road. Soon after the cemetery we turn right along Broadlands, and then the Hawthorns, past the Leisure Centre.   The bridge over the Ise is in the diagonally opposite corner of the field, over to the left.

Once we cross the river our troubles begin.  The boggy ground is frozen, but only in parts!   We're aiming for the left hand end of the spinney on the hill.  Easier said than done.  Keep moving, aim for the snowy bits, and hope not to sink.  Star trekking comes to mind – “We’re only going forward ‘cos we can’t find reverse”.  I make it without going knee deep, though my socks are muddy.   Barry and Gordon are a little less lucky.  Even so, no one loses any footwear.

After this it's plain walking, clear paths and tracks, until we arrive back at our starting point, along Shotwell Mill Road, past Grange Farm, and then the pond where we see these birds, in search of titbits, perhaps.  Hard luck, guys, we've eaten it all.