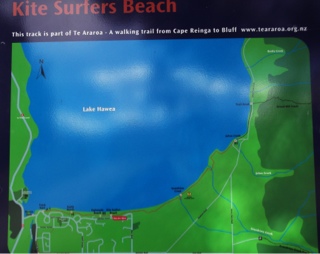 According to my garmin the walk was around 4 miles each way. We set off from Johns Creek and followed the track above the lake shore. Brilliant flowers growing wild - lupins, roses, orange Californian poppies, as well as other less ostentatious flowers. New Zealand flax, pines, silver birch and the odd blue gum, as well as some deep pink mesembryanthemums, clearly flourishing on the rocks in the sun.  The wind was strong today. 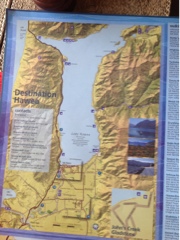 Map of the walk in one direction is here.

The wind has whipped white horses all over the lake, and the waves hit the shore with a crashing sound as stones are rolled back and forth. It sounds like the sea.

We're going to take the track to Lake Hawea village. It runs just in from the shore, through pines, and along cliffs. Today we're pushed along by the wind, but the sun shines and there are flowers everywhere - self set feral flowers?

Lupins, predominantly pink and purple, but with large patches of wild yellow ones too. Californian poppies, with their delicately shaped flowers of rich waxy orange. Wild roses, with their small pink flowers and arching branches. Two different types of yellow flowers, both growing as tall spikes. A blue flower, with pink on it - another spike. Even the birds foot trefoil is bigger and lusher than at home. There's a rocky slope where deep pink mesembryanthemum are sunbathing. The kete flax is everywhere, and we have pines and eucalyptus too. 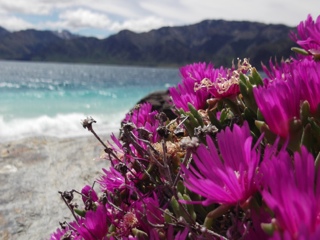 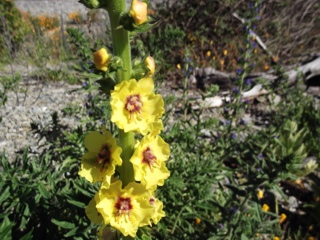 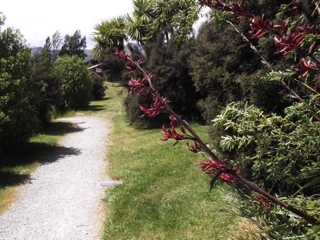 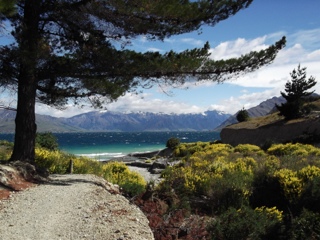 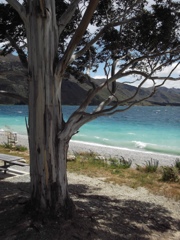 We stop for coffee at the General Store and Café on the corner of Capell Avenue and Parry Crescent.  The way back is against the wind, but still bright and exhilarating.

I walk along the Timaru River road, from Johns Creek for about a mile, then for a very short stretch of the Breast Hill Track, part of a long distance walking track. 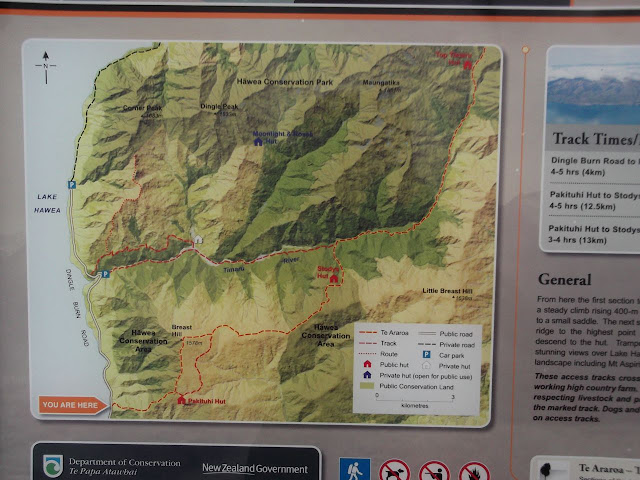 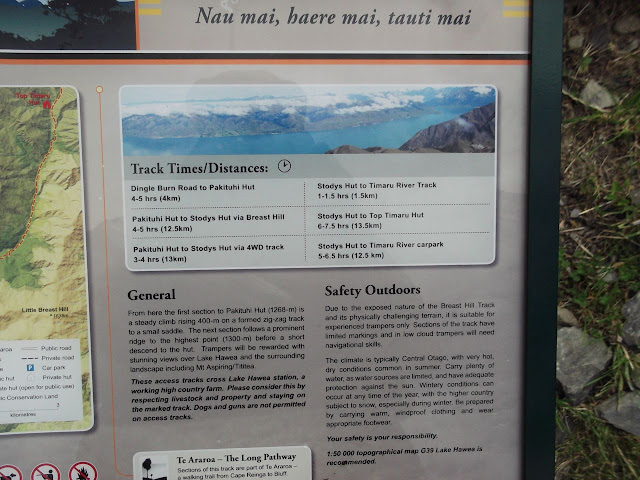 I meet a man coming down who says it's about an hour to get to the ridge, and very steep zigzags.  It does climb very steeply, and one of my excuses for turning back is that my old trainers are not exactly suitable footwear.

Garmin map
Posted by aliqot at 8:31 PM No comments:

Email ThisBlogThis!Share to TwitterShare to FacebookShare to Pinterest
Labels: New Zealand, under 10 miles 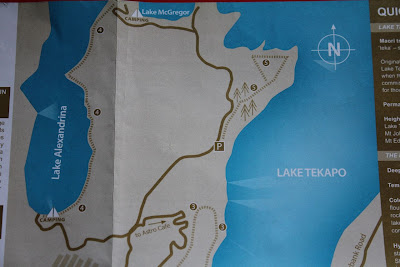 Very short - probably four to five miles in all. 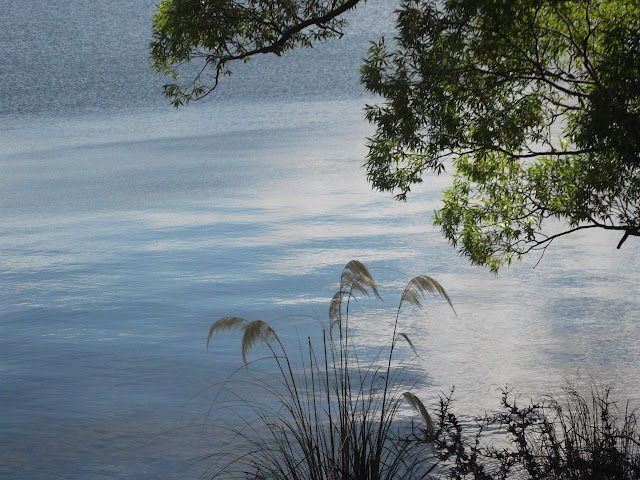 Harry walked from Lake McGregor to the southern end of Alexandrina.  I walked most of the way then back to pick up the car and collect him from the (unsealed gravel) road from the camping area.

We saw Southern crested grebes doing a courtship dance, plus mallards, coot and black swans. Canada geese as well, of course.  These guys are everywhere!
Posted by aliqot at 4:44 AM No comments:

Email ThisBlogThis!Share to TwitterShare to FacebookShare to Pinterest
Labels: 5 miles and under, New Zealand

Our longest walk in N Z so far. About 10 km - up to the hill top Observatory and back the longer gentler way.  We followed instructions from a local leaflet. 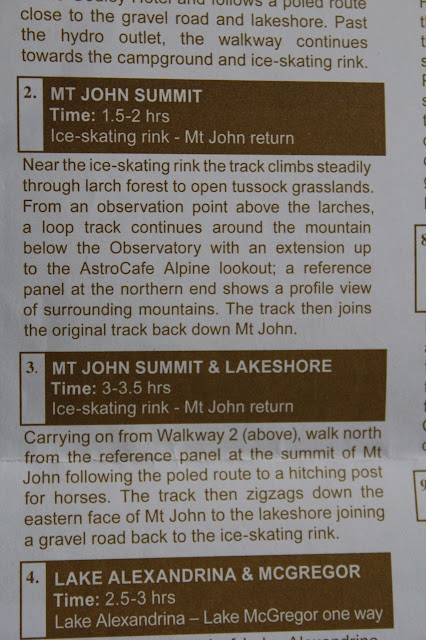 The only map we needed on a fine summer day was the one in the picture. The tracks are clear, well signed when they diverge, and easy to walk along. I had the photo on my camera - just in case! 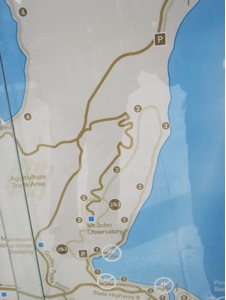 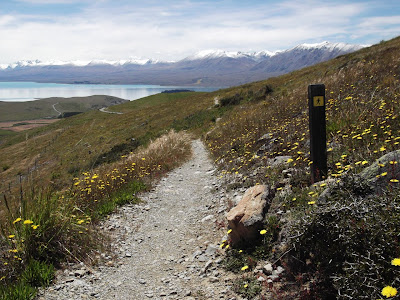 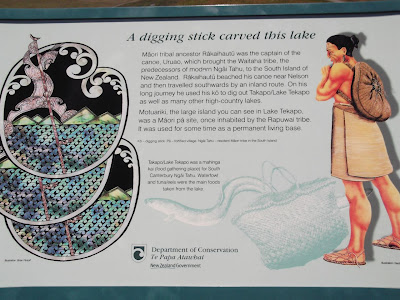 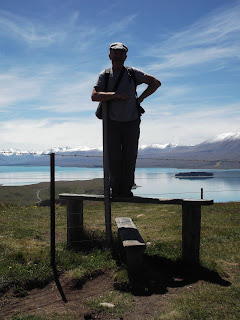 Email ThisBlogThis!Share to TwitterShare to FacebookShare to Pinterest
Labels: New Zealand, under 10 miles

A few short walks down under

Some short walks in New Zealand

Health warning - this post was written later than the date above!

The enchanted island is a nature reserve and can only be accessed with a permit.  It has been forcibly cleared of predators such as rats, possum and stoats, to restore native fauna and flora.  There are various walks and activities at the two places where the public is allowed.
We had to take a boat from Paraparaumu on the west coast of North Island. 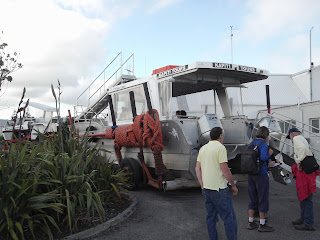 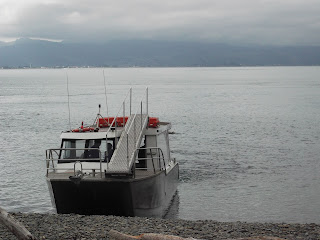 We landed at Rangatira, halfway along the eastern shore of Kapiti Island. 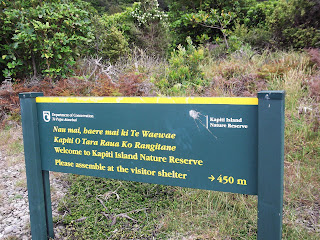 After our introductory pep talk about the wildlife and conservation, we decided to take the Trig Track up towards the highest point on the island, Tuteremoana (521 m)


It was indeed steep, and hard work.
We paused at a bird feeding station, which is essential for the hihi, or stitchbirds.   Some of the bigger birds can out-compete them for food.  From there it was another few minutes to the junction with the Wilkinson Track, a twenty minute walk to the summit lookout.   Lunch in hot sunshine.

We took the Wilkinson Track downhill - a gentler choice for the descent. It wasn't wet.

Historic sites
At the start of the Wilkinson and Trig Tracks is a historic whare, the oldest building on the island and the oldest associated with nature conservation in the country. It is thought to originate from the early 1860s when it was built as the homestead for the McLean family who farmed the island at the time. It was later home to caretakers on the island including Richard Henry, the world’s first state-sponsored conservation officer. It is now a base for scientists, trappers, students and numerous dignitaries and visitors.
Near the landing area you’ll find whaling trypots—artefacts from the island’s whaling history.

The three shaded sections are from the information on the NZ Department of Conservation website about Kapiti Island.

We walked along this before leaving Kapiti Island later on the second day, after our overnight stay, and kiwi walk.

There's a campsite and a café at Pelorus Bridge Sceninc Reserve, and the café sells leaflets about  several walking tracks. We arrive quite late one afternoon, and decide to try the short Circle Walk. 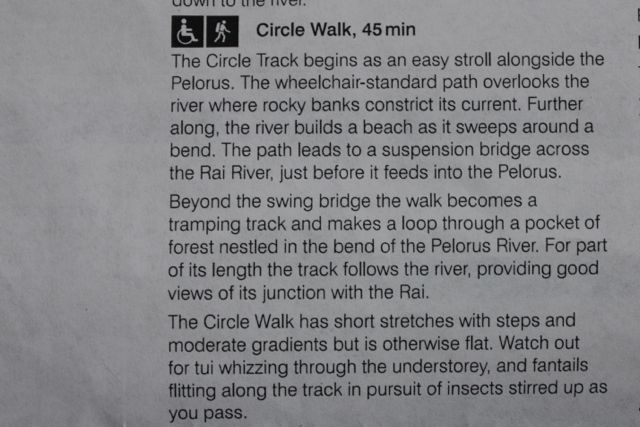 We have to cross the road bridge before starting on the track. 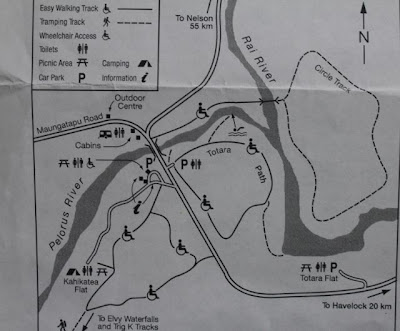 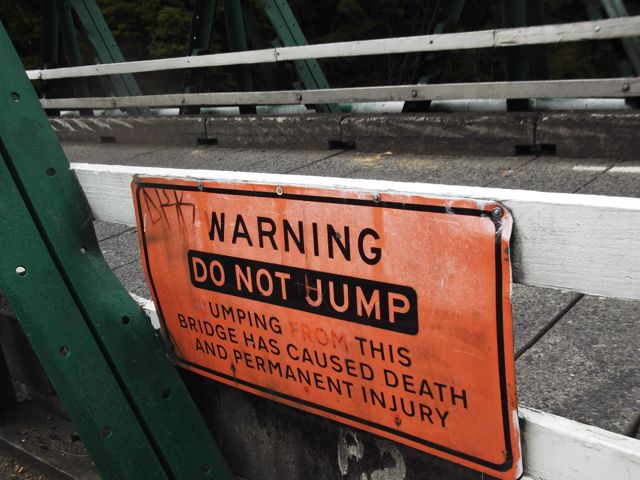 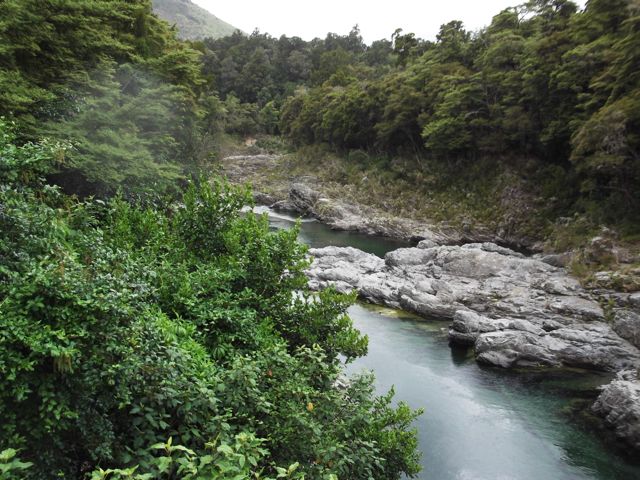 From here it's a pleasant, not too strenuous wander across a footbridge over the Rai, and then through woodland with views of the Pelorus river. 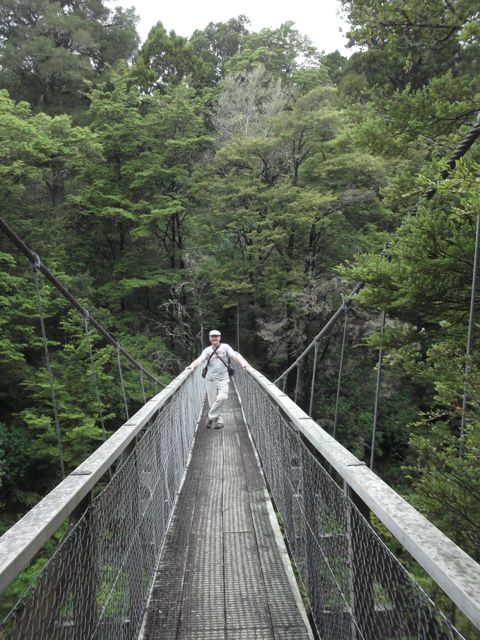 Afterwards we take another short track to the rocks and a swimming hole. 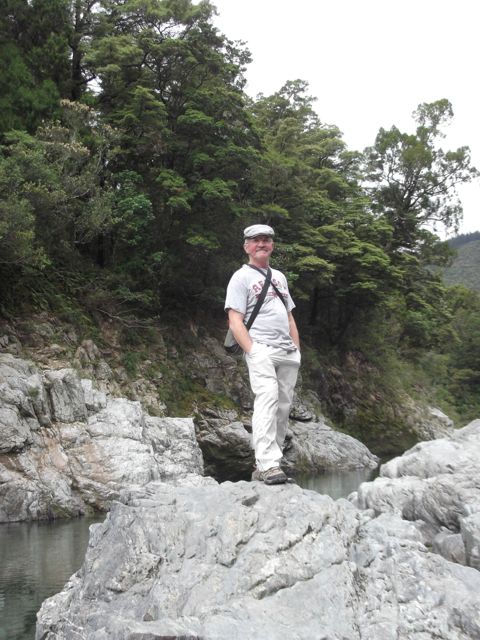 You can see the road bridge clearly - one lane only! 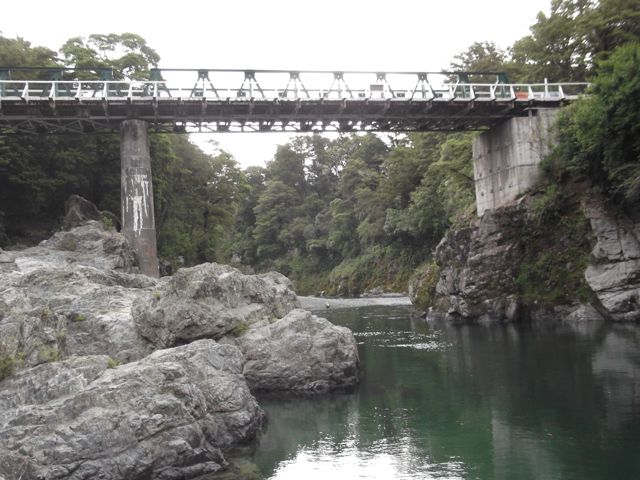 The Queen Charlotte Walkway is a long distance path, and you need to buy a permit to walk any distance.  Much of it is well away from road access, and some people arrange to be picked up by boat at strategic points. The alternative is to arrange accommodation along the way.  We met some people who had walked it, when we took at ride on the Pelorus Mail Boat from Havelock, and they said it was not difficult, provided you were prepared and reasonably fit.
We didn't have time to organise a long walk, but did tackle a very short section at the beginning - no permit needed for this bit.  It made a pleasant evening stroll.
Our route 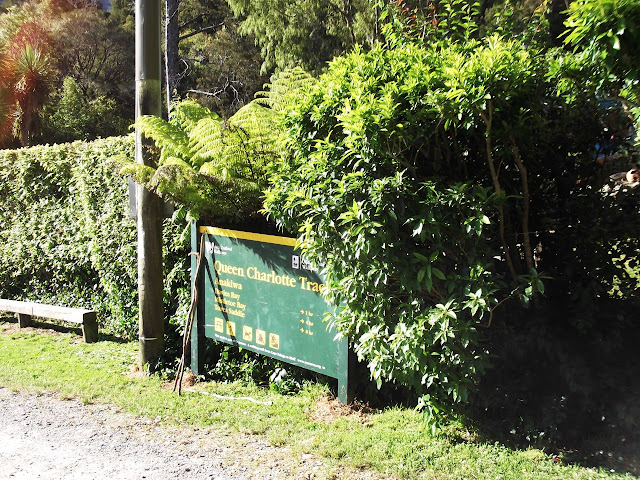 The path begins by the water at Anakiwa, and climbs up through woodland, then down towards Davies Bay. We hung around the bay for a while watching a wader, and also a New Zealand kingfisher - bigger than ours and nowhere near as shy.

This was a very short walk - about half an hour or so, up to the top of Cullen Point, with a view over the Pelorus sound. 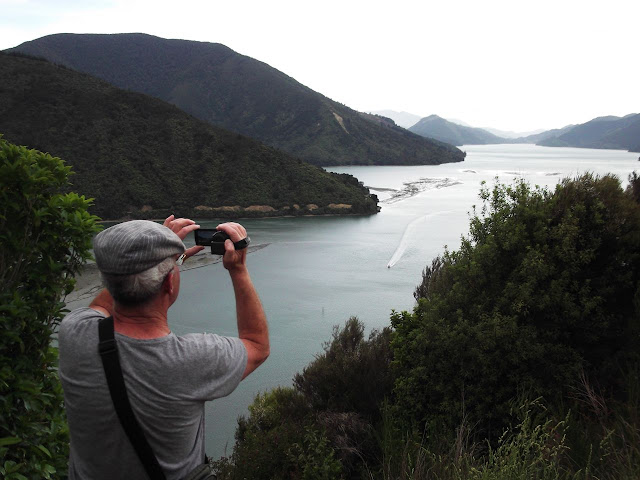 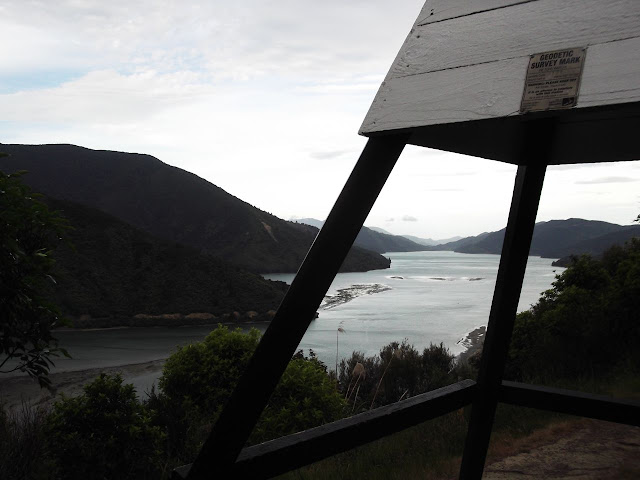 Posted by aliqot at 5:52 AM No comments: