No route descriptions here - it needs working on.
With Maureen - 8.5 miles.

So a fine day, and a few photographs! 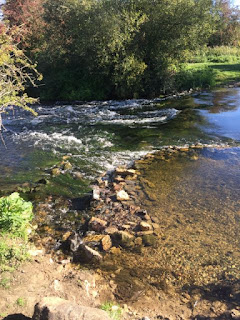 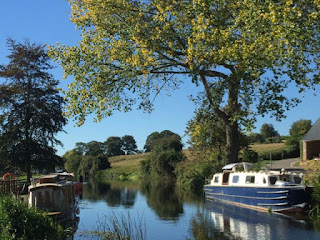 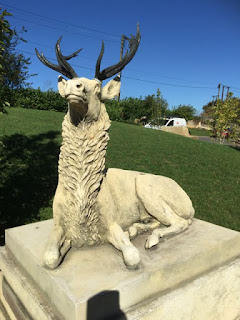 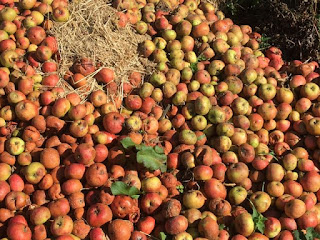 Monday 24 September. With Maureen, Norma and Eddie. Just over 7 miles.
Covering much of the same ground as last Thursday. 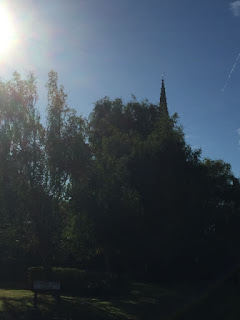 From Nassington church we walked north along Church Street. At the junction with Apethorpe Road we continued straight ahead along Northfield Lane.

Soon after passing Eastfields Crescent, and a house called Frog Hall, we turned left into what looks like an area of private housing. There is a footpath waymarker just after the turn, and another one on a fence inside.
We followed the left hand side of this yard, past some stables and through a gate into a path between hedge and fence - quite a narrow one.

At the end of the fenced section the  path heads across a small field and through another gate. Then we turned slightly right to follow the obviously worn path to a gap between trees. As we walked on we saw another way marker and followed the route as far as a stile, then a gate onto a bridge over the dismantled railway. The path continued to the Wildlife Trust Field Centre. We went through the gate and across the track.

The path is marked through the gate. At present it is waterlogged for a short distance, but it is possible to avoid most of it, and unless your boots leak there shouldn't be a problem. Another  blue butterfly glimpsed today.  After a short distance we reached a gate with a warning about shooting, and not straying from the path! The path is just about obvious, though a couple more marker posts would help.  Across a wide field, then through a couple of gates brought us to a wider track through the woods, where a right turn led to another bridge over the dismantled railway. This track heads north, and soon after reaching the wide green space of Jack's Green we turned left along a permissive path to the Glenn Miller memorial. 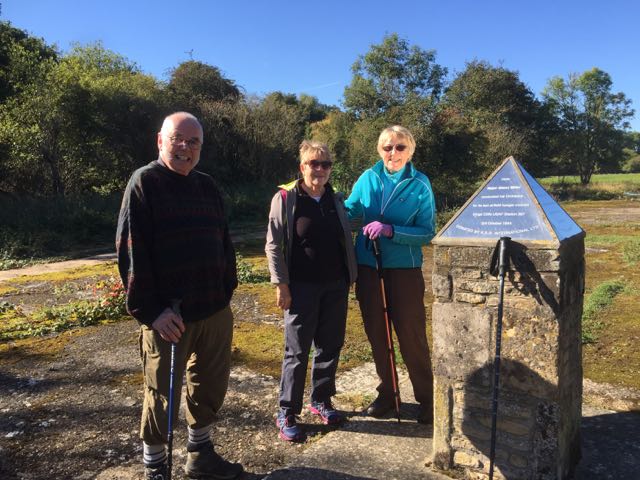 We briefly paid homage to the man, then took the path across the grass to join the main track north and past the old clay pits. We saw a couple of (fallow) deer running across the fields here.  Before long we arrived at Kings Cliffe industrial estate. Ha? Deb's Café is advertised!  Weekdays until 2pm!  But we had to ask before we found it tucked away. Although it was a bit hidden there were at least a dozen other walkers there, as well as a few workers from the industrial estate. 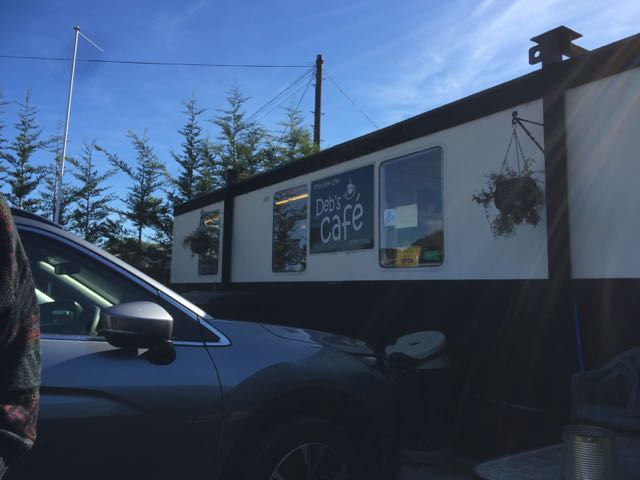 Like giants refreshed, we crossed the Roman Road between Wansford and Kings Cliffe, and followed the track through more small industrial buildings. Just after a gate we took a footpath to the right, and followed it through Cocker Wood, parallel to the road. More deer crossed the path ahead of us.  When we reached the track at the end we turned right and back to the Roman Road.

We crossed the road and walked south down Sulehay Road. Just after Old Sulehay Lodge gates we turned right into the old quarry, now a nature reserve.  We saw a green woodpecker here. And some fine fungi. 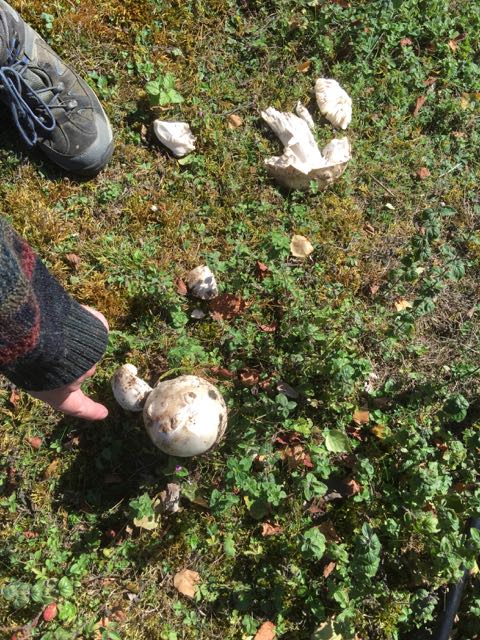 Our path runs diagonally through the reserve heading southeast. A minor hiccup when our path met the perimeter track - the path we wanted was a very short distance away on our right. It soon led us out and we picked the path up again across the minor road.
For some distance the path is enclosed between two fences, then heads south east over fields. It's worth checking the route against field boundaries here, or you could end up in Yarwell.

Once we could see the spire of  Nassington church orientation was easier. We joined the byway and caught sight of a red admiral fluttering about. A right turn took us under a railway bridge and into Nassington again.

Wednesday 19 September 2018. With Marta. 7.75 miles. windy but warm.
We started near the shop in Nassington, and made our way via the Jitty and a footpath to Church Street. We turned away from the church, and took the Apethorpe road as far as a left-hand bend, where we carried straight on, along Northfield Lane. The footpath turns off to the left, just after a house called Frog Hall, but the signage is not obvious. it goes through a complex of cottages, then a gate.  Soon after this the path follows a narrow space between hedges before coming out into fields.  We saw a few swallows flying over the fields.

The path here is clearly marked and easy to follow,  crossing a bridge over the dismantled railway and passing an info board about Old Sulehay Nature Reserve.  Part of the forest area is an SSSI.  We heard what was probably a yaffle/ green woodpecker.

We followed the path as far as the Wildlife Trust Field Station. The path opposite this, on the other side of the byway looked like a stream today, so we turned right along the byway to look for another path a little further on. We missed it, and so continued past Ring Haw woodland, and decided it was time for a break. After this we followed the small road ahead past Old Sulehay Lodge, as far as the junction with the Roman Road between Wansford and Kings Cliffe. Across the road, at the junction is a path/track forbidden to cars, though they'd have to be rather small to get on it. We took the first track left which led through Cocker Wood parallel to the road. Another left turn, marked with a footpath waymarker took us through some farm buildings and back to the road.
Across the road, and we followed the bridleway alongside Kings Cliffe Industrial Estate.  The path heads south. 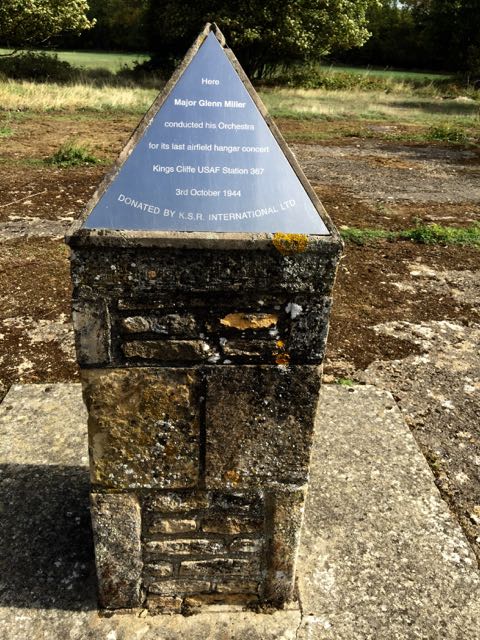 which has the inscription:

According to Wikipedia, while Miller was traveling to entertain U.S. troops in France in December 1944, his aircraft disappeared in bad weather over the English Channel.

Unfortunately we were not in a position to play Chattanooga Choo Choo as a tribute, but we think we did a passable mime of conducting. 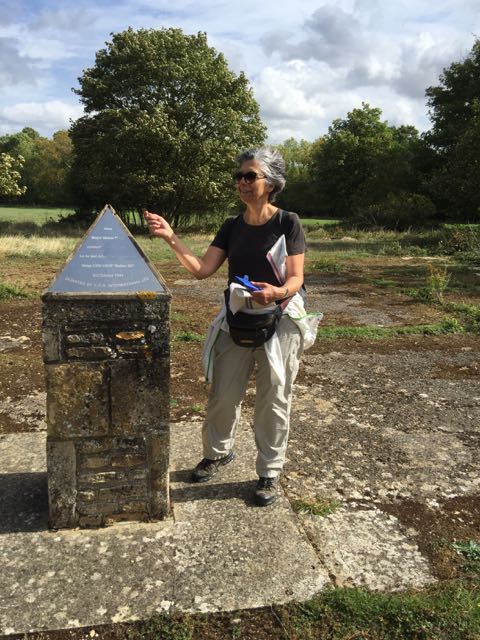 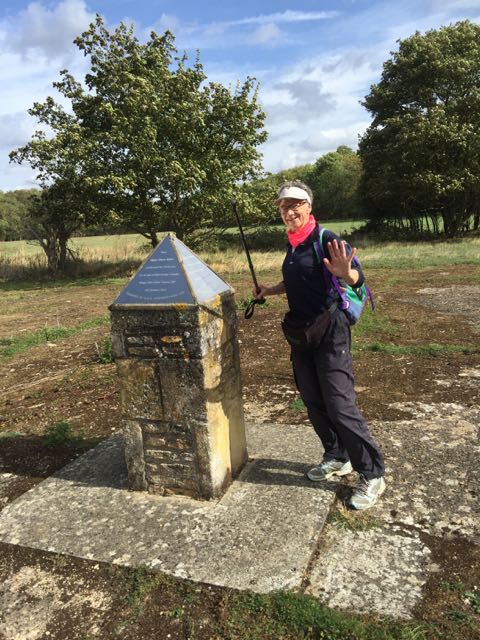 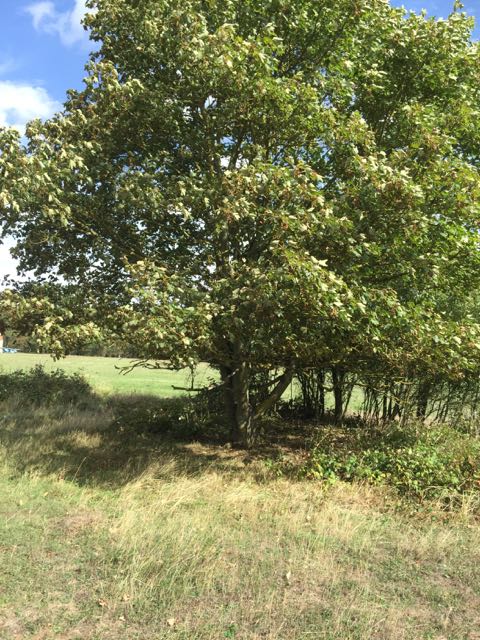 We continued south along the track, and found the footpath on our left just after crossing a bridge over the dismantled railway. We saw some deer running across a field in the distance. 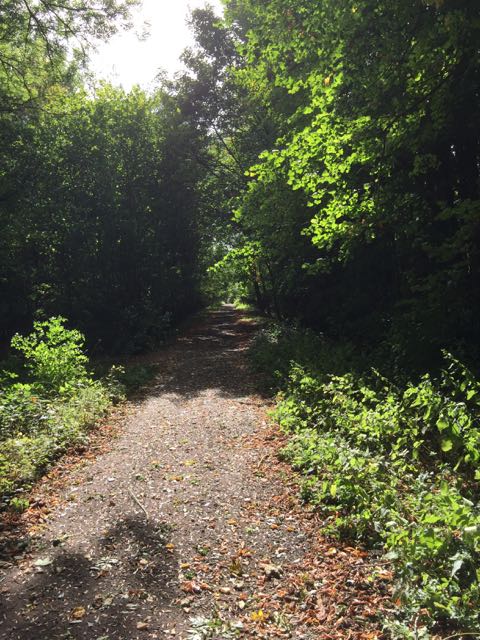 The path rejoined our route - at the flooded section - not very deep, but not avoidable, and I was walking in trainers. Soggy, but i did spot a couple of blue butterflies. We followed the byway as far as the road at New Sulehay, then turned left along the road and walked back into Nassington. 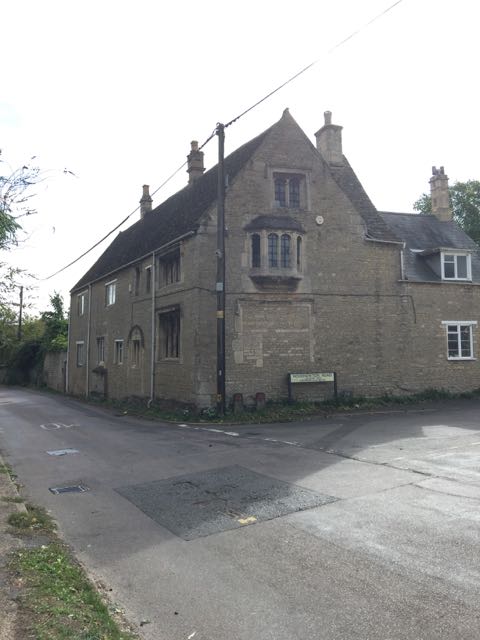 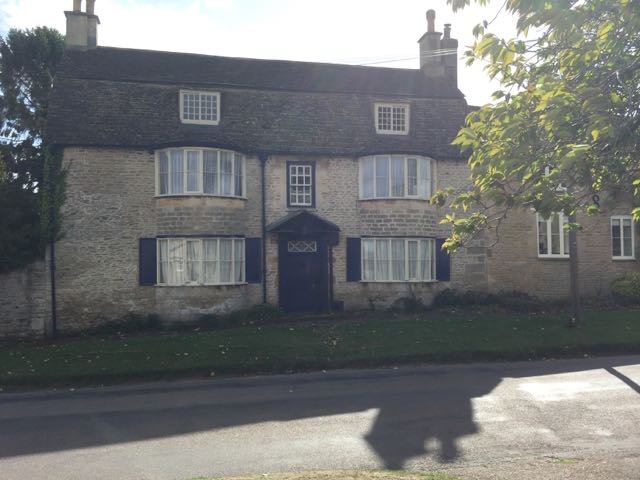 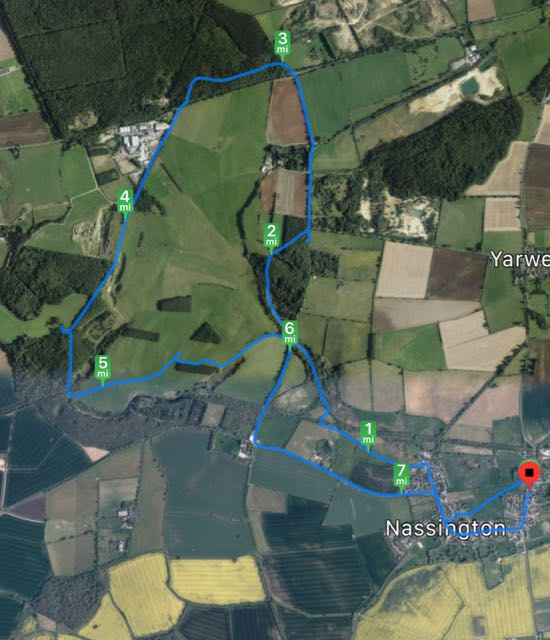 Fotheringhay, Elton and the River Nene

With Maureen, Norma, Kate and Eddie. The same walk as last Thursday, with no false turns this time! Around 6 miles.

As we approached Elton we noticed a garden centre close to Elton Hall. We're usually quite ready to be distracted by a cuppa and a snack before a walk, so we investigated. We shared a large slice of rather good banana and chocolate cake, to accompany our drinks.

The people in the café were quite happy for us to leave the car in their car park while we walked. 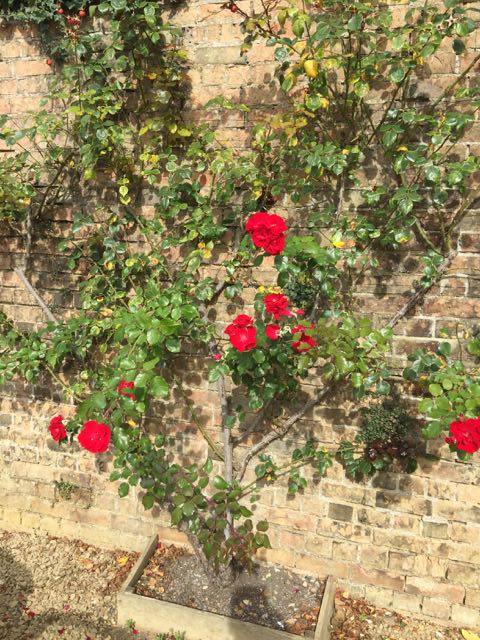 The walk into Elton village is getting on for a mile, past trees 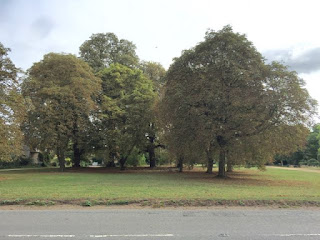 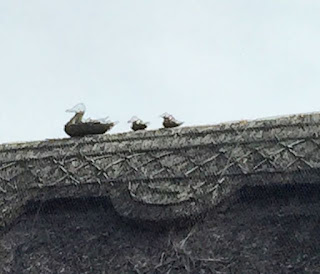 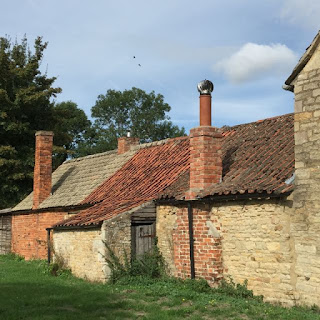 a war memorial with a difference 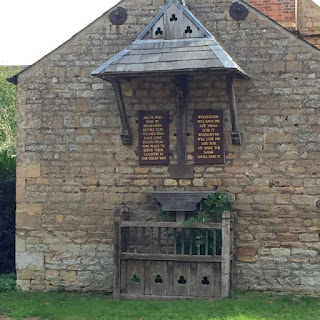 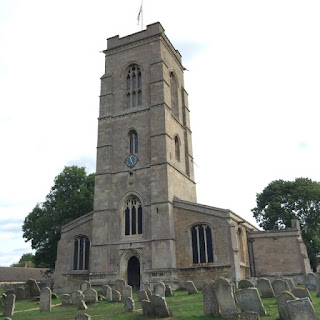 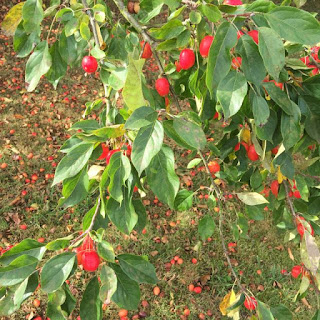 a couple of pubs and a village shop 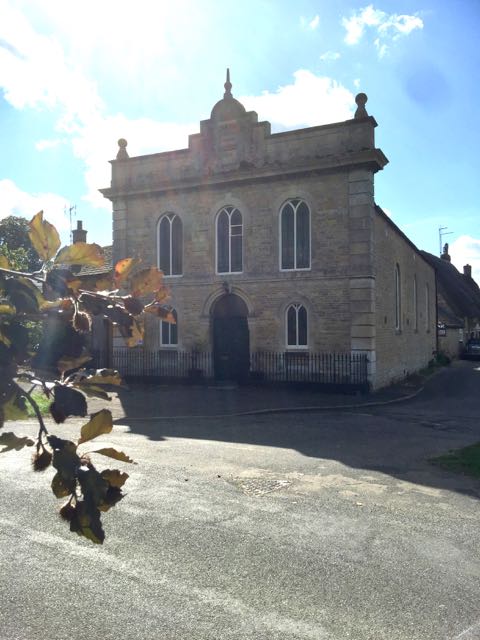 Near to the chapel we found the gate and public footpath which leads past the old mill to the lock gates, where we crossed the River Nene.
Just after the lock we turned right, and crossed a footbridge. Then the path turned left across fields, then alongside a hedge and over the dismantled railway line. between Wansford and Oundle.
We ignored th path which goes off diagonally to the left, and continued along the track with a blackberry-laden hedgerow on our right. 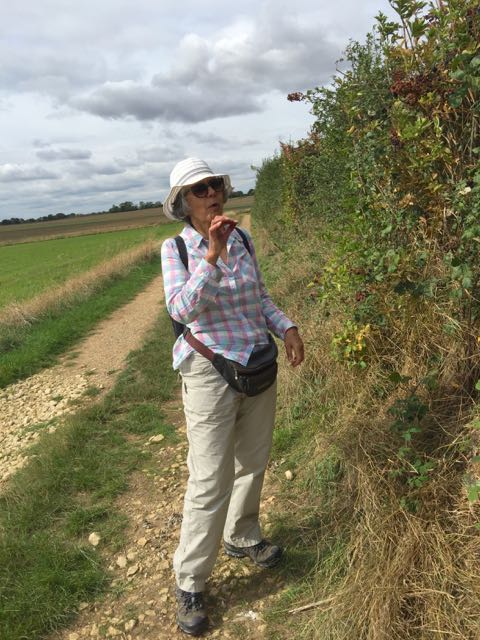 We crossed the minor road and went over the stile on the opposite side, across the field and through the farmyard of Park Lodge. We had to walk over the two recently ploughed fields, but they were not wet or sticky. At the other side, through the trees of Park Spinney, we joined the Nene Way. We turned right and continued to the point where four paths cross. Here we turned slightly to our right, as the Nene Way headed off straight ahead.
Before long we met another road, at a junction.  Large tree trunks provided a good place to sit and indulge in another short break.

We crossed over and took the small road leading directly east.  It runs south and then east again and after a mile or so reaches Elton Bridge. 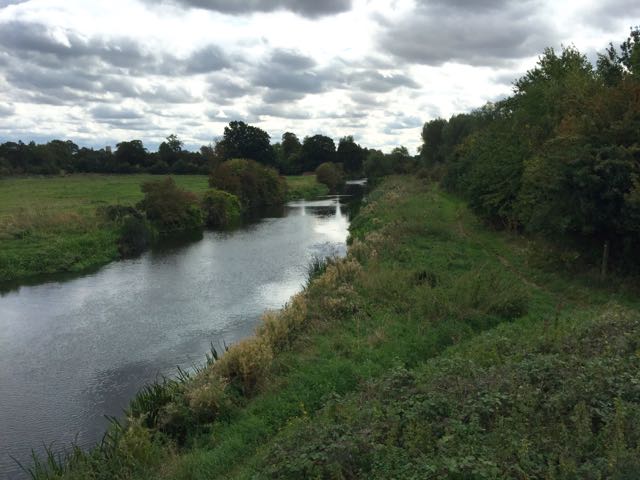 We followed the road back into Elton and on to the garden centre, though we could have taken a footpath by the river.
Soup and bread at the garden centre café made a very satisfying end to the walk.