Thu, 2015 Oct 29 9:53 AM BST
With Gordon and Maureen. Grey and threatening to drizzle, but we were dry until the last section. Muddy underfoot in places. Around 9 miles (without my last 1.5 miles to retrieve my map!)

We decided to risk the forecast poor weather, and in fact we were lucky. A little rain early on, then the odd spot of drizzle.  Underfoot was fine apart from a few ploughed fields, but at least these were flat, though a little sticky. Towards the end the path crossed some fields of wet plants, so my feet were a bit soggy.

In Carlby we walked along High Street north west. Soon after the road bends to the left is the footpath, off to the right. It's the second footpath sign, and not very obvious, so we overshot and had to return. Once found, it was fairly easy to follow, as it hugs the field edges for a while, then heads slightly east of north.

There were a couple of recently ploughed fields to cross - a seasonal hazard which makes boots heavy and legs tired.
We arrived at Witham on the Hill after about two miles.  We had a brief pause to don wet weather gear, then it stopped raining . . . 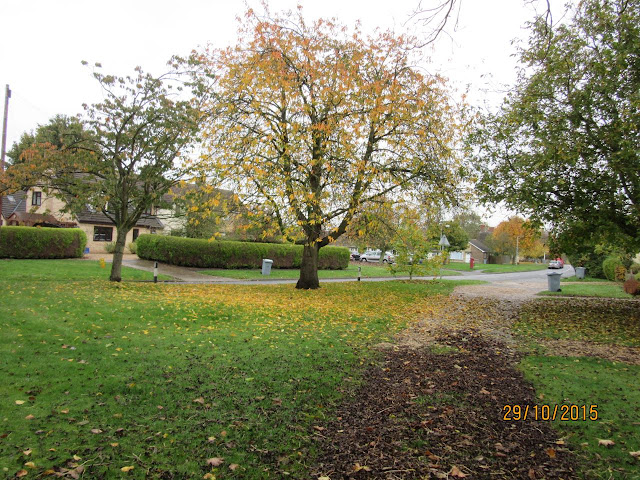 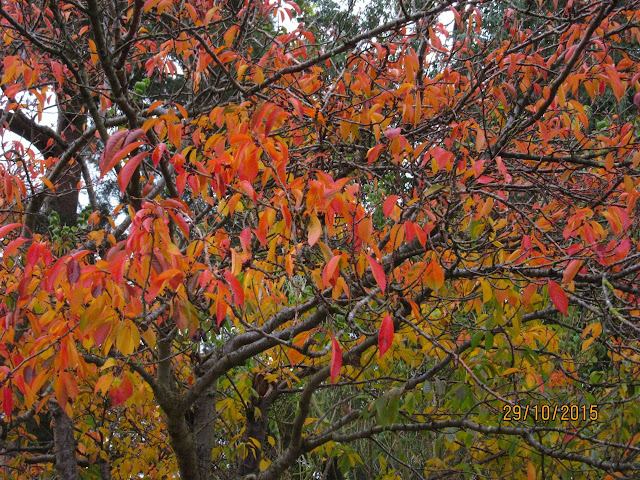 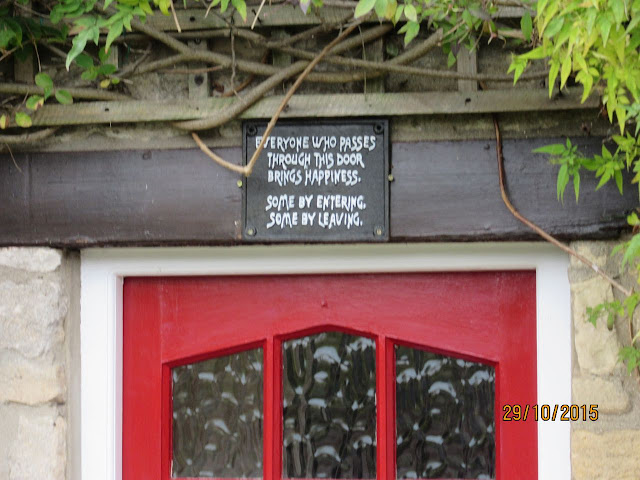 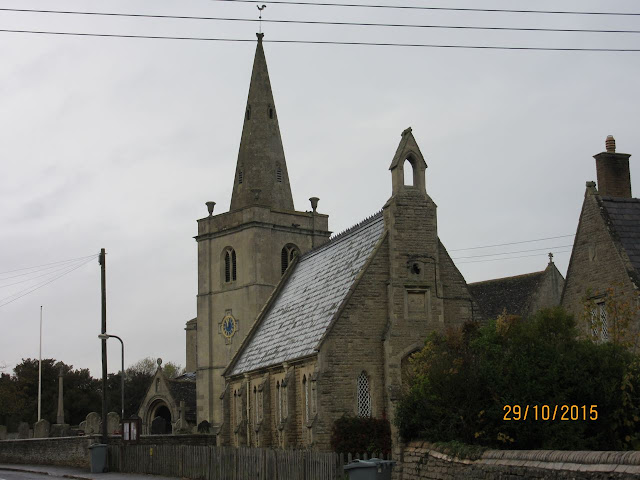 Just below the roof of the old school is the following inscription:

Train up a child in the way he should go
When he is old, he will not depart from it. 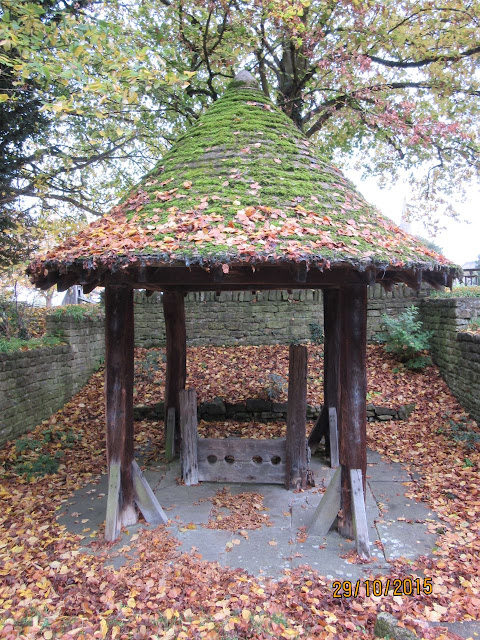 We walked along the road past the church, then the green space with playground, and the stocks, then turned right along Bottom Street. We followed the track towards Witham Lodge, and when it ended at a field with some cows, we turned left along the fence. this led us to the footpath going east towards Toft.

It emerged in Toft just before the village sign, and a bridge, which should cross the East Glen River, though this appeared to be dry. I was impressed by this sloe bush. 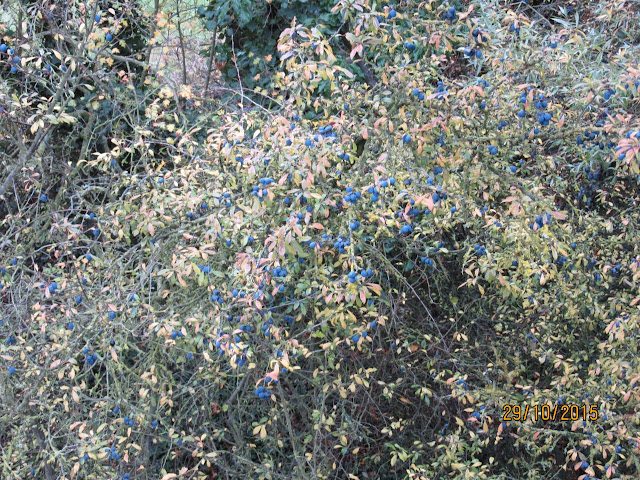 Shortly after the bridge we crossed the road to take the footpath which goes through Toft golf course, heading south towards Manthorpe. 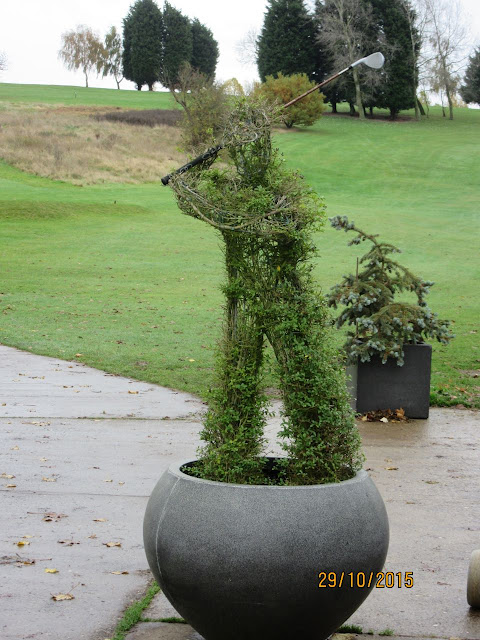 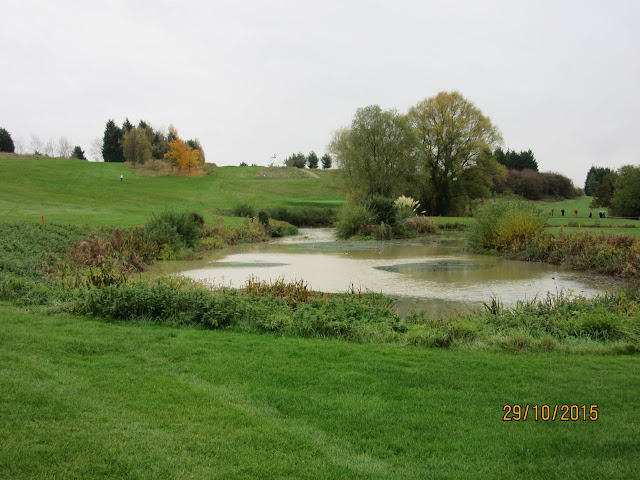 There are marker poles, but they were not easy to follow. Luckily the golfers seemed quite happy to redirect us when we wandered!  Plenty of them there on a damp Thursday morning too.

Manthorpe has a stone engraver and a farm shop where I bought a jar of honey, but no handy benches. I was amused to see a "Beware of the Dog" sign, and then down the farm drive, a little pottery dog. However the barking from inside the house reinforced the warning.

We needed a break, so perched on the wall next to the stile at the start of the next footpath, towards Bowthorpe Park Farm. We feared we might have to cross a forbidding-looking ploughed field, but our route veered left away from it. Phew. 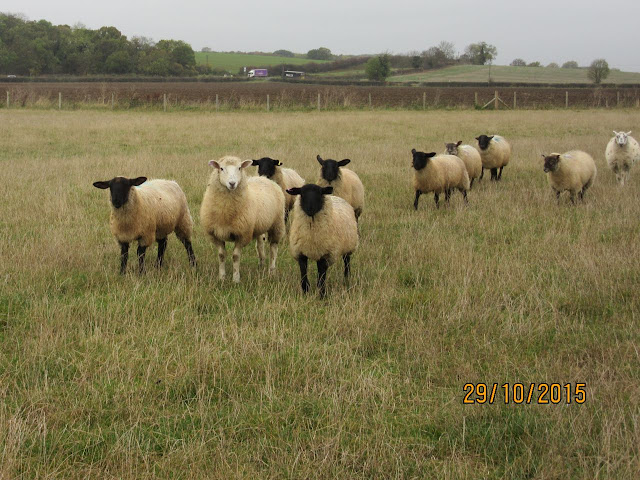 At first the sheep ran away, then turned back and came towards us, then followed us as we walked through the field along the path.
We crossed a footbridge and went uphill to Bowthorpe Park Farm. This is the site of the Bowthorpe Oak. We paid our £2.50, which the owner gives to the Air Ambulance, and went to see this massive tree. It is said to be over 1000 years old, and may have been planted when William the Conqueror was alive. 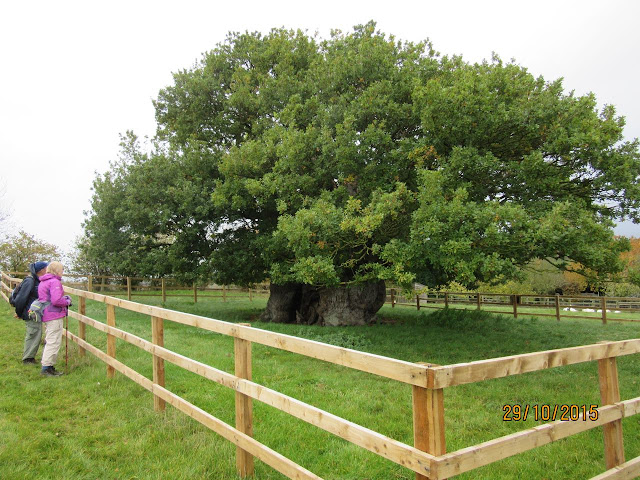 I'm not sure how it compares with Sherwood Forest's Major Oak.

We went back to the footpath, which passes to the east of the farm buildings, and followed it south to join the track to Spa Lodge near Braceborough.  We passed the old Station House, with its decorated garage doors, and walked into Braceborough.
Just after we turned right at the end of Spa Road, the footpath goes off to the right, past a large garden. We took the right hand fork when the path split, and walked over a field, then west past Braceborough Lodge, through Braceborough Little Wood and followed the markers towards Carlby. Rain tempted us into a shelter for another snack. The rain stopped and then it was a short mile back to Carlby, across fields and the dismantled railway line.

Map and details
Posted by aliqot at 9:30 PM 2 comments:

Mon, 2015 Oct 26 9:13 AM GMT
With Gordon and Maureen. To Bulwick via Harringworth Lodge. Grey and a little chill at start, then beautiful sunshine. One ploughed field was very rough. Around 9 miles.

We follow the Jurassic Way north east out of Gretton, along the farm track, then through the corner of a field and over another pasture. At the next gate the field has recently been ploughed and, although not over wet, this was hard going. 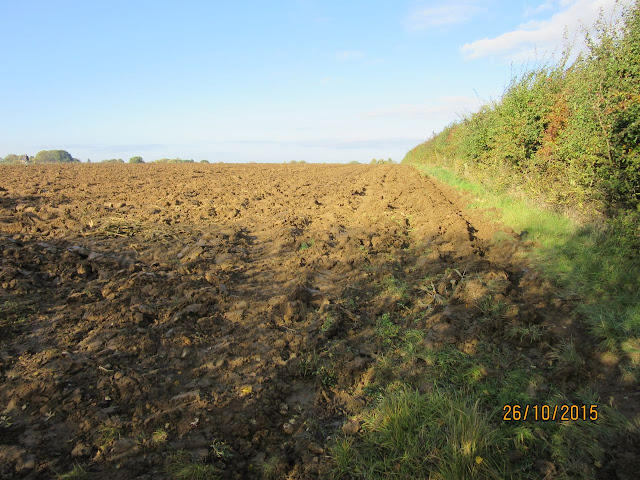 After that we simply followed the Jurassic Way out as far as Harringworth Lodge Lake with its trees looking fine and autumnal in the sunshine. 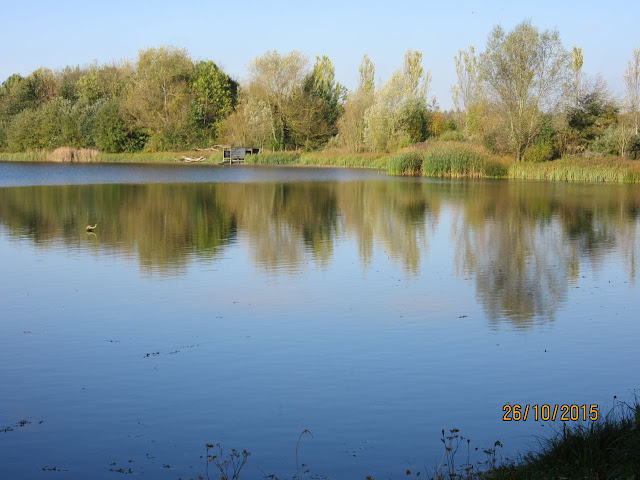 At the end of the lake we turn right and follow the footpath east uphill, across another field, over the road and along the hedges for some distance. There's a short section heading south before we pick up east again. We join Red Lodge Road which takes us over the A43. A right turn leads towards Bulwick church, and we head for the Pickled Village tea shop for a coffee break. Warm enough to sit out in the sun! 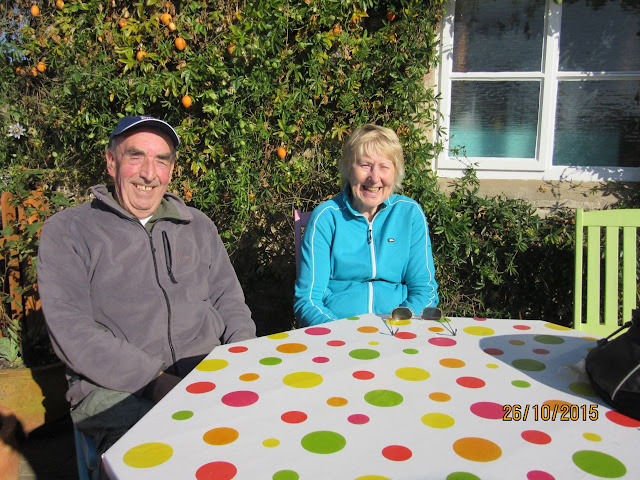 The return journey follows the same route although we did deviate at the end to avoid the ploughed nightmare. 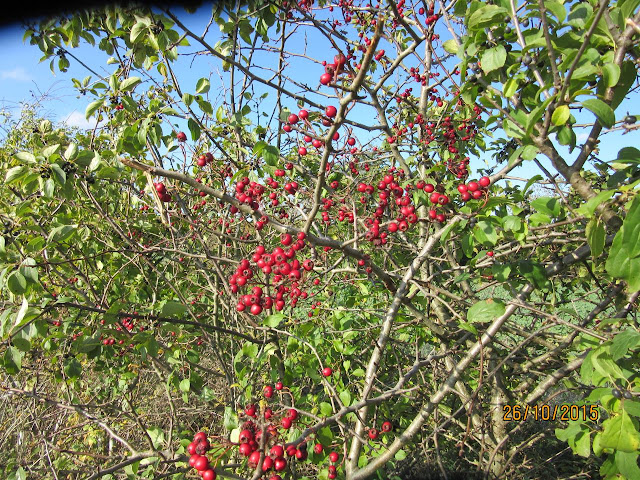 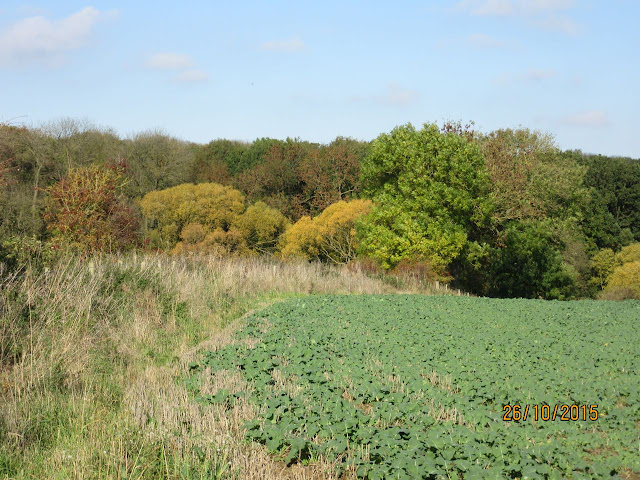 We saw a couple of red kites, loads of crows and gulls. 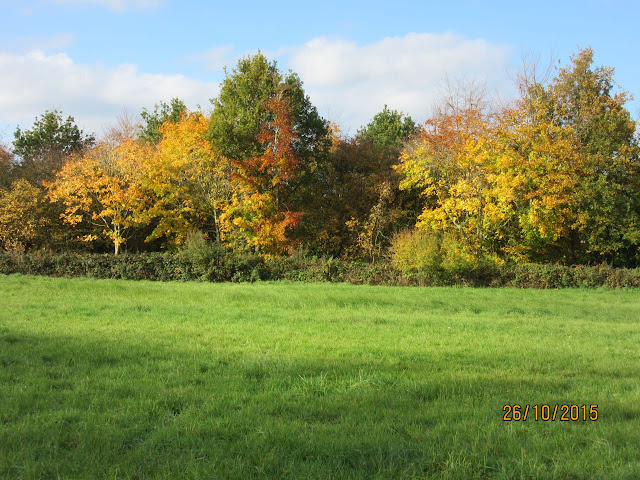 With Marta. About 6.5 miles. Rain before we started, but we stayed dry. 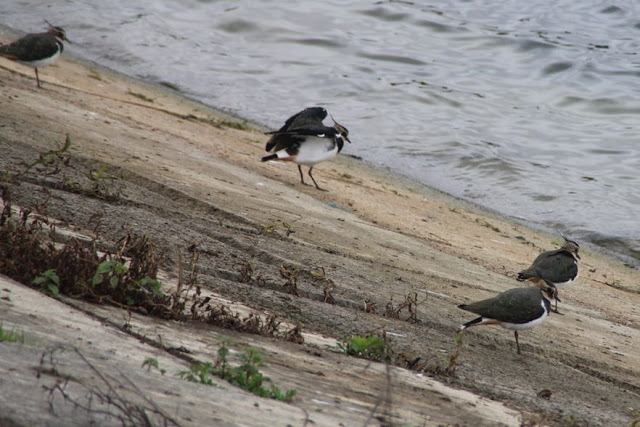 Lots of waterfowl on the reservoir. Lapwings lining up below the causeway. 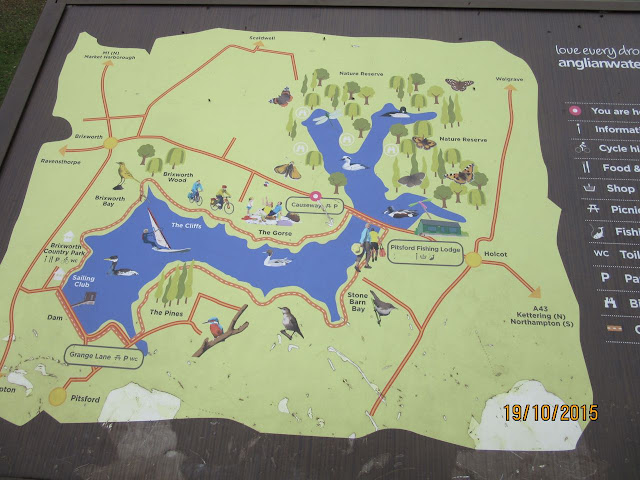 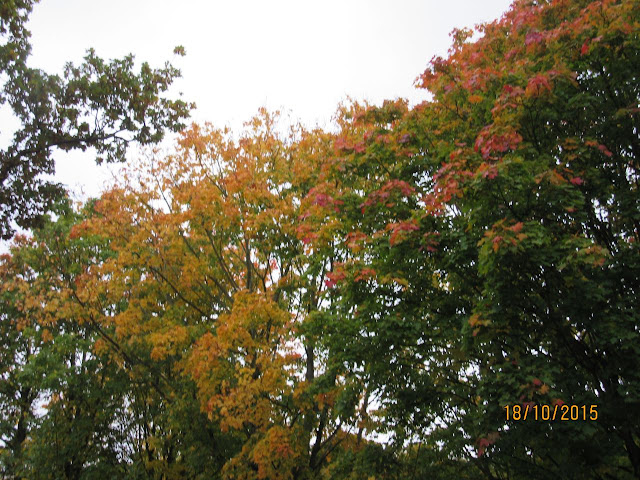 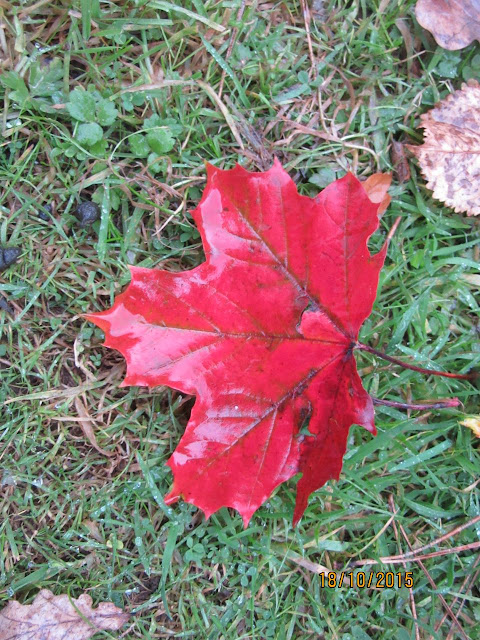 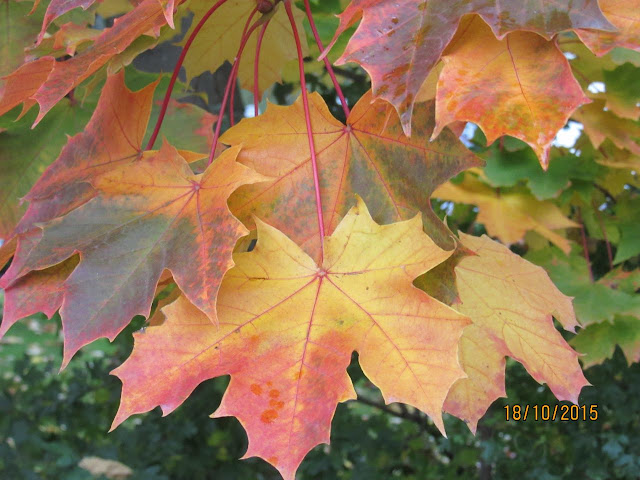 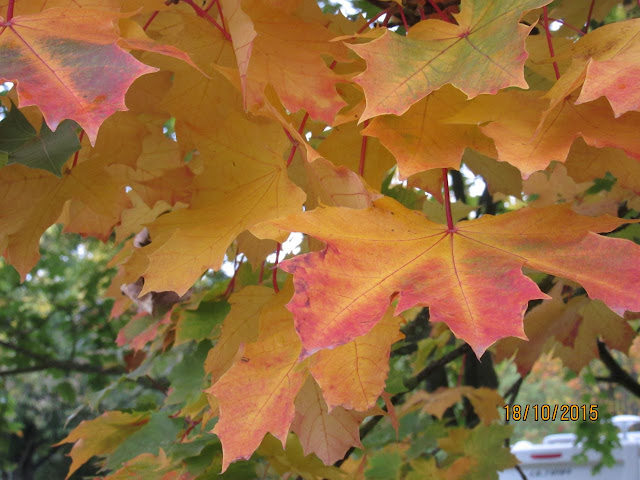 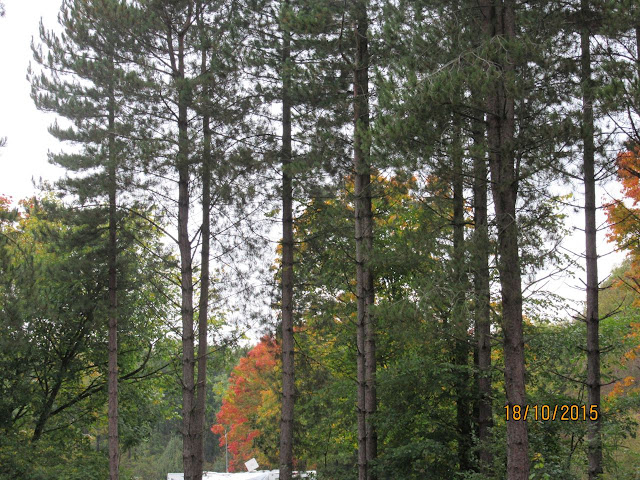 At the feeders there were plenty of tits - mainly bluetits and coal tits with great tits and one willow or marsh tit. We saw a jay flying into the trees.
Posted by aliqot at 2:48 PM 6 comments:

Email ThisBlogThis!Share to TwitterShare to FacebookShare to Pinterest
Labels: 5 miles and under, Fineshade, Northants

Mon, 2015 Oct 12 9:35 AM BST
With Gordon, on a fine autumn morning. Excellent underfoot, good views. Around 9 miles. Some sections of quiet road.

We set off from the church and walked along the road out of the village (signposted Greatford) to the main Greatford to Carlby Road. 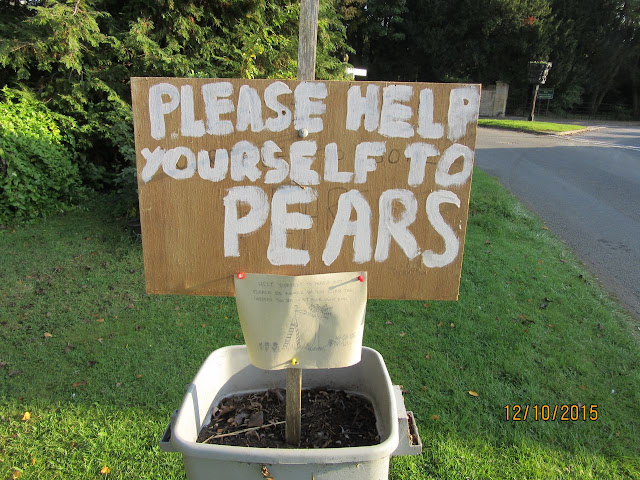 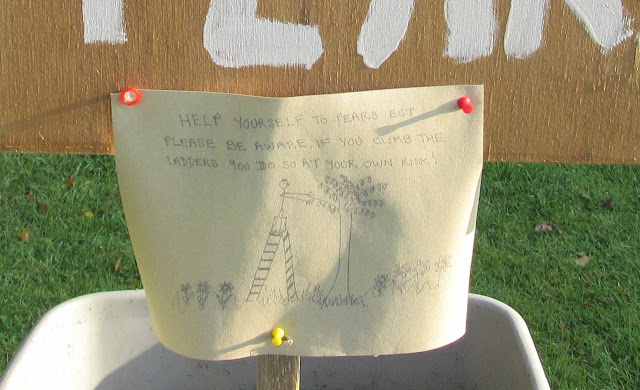 At that point we took the footpath next to the road sign which heads gently up the mini-hill, round the field the farmer was working in, across one dry ploughed field
and into the woods of Shillingthorpe Park.
Shillingthorpe Hall was used as an asylum for the insane, and a convalescence home during WW2.  It was demolished soon after the second world war. For an old photograph and some information see here.
We turned left and followed the track through the woods, past some lying-down cattle and down over the River.
The path comes out opposite a private road. We turned right and walked past the level crossing. There is a notice saying that the authorities are considering closing the crossing altogether - probably to reduce accidents. (More of this later).
We continued along the road until we reached a by-way leading to a ford, which now has a footbridge, and then a bridge over the railway.
After negotiating these, we followed a bridleway northward, mostly along field boundaries and very clear. There are fine wide views all around, but not very eye-catching for the camera.  This was the highest ground on the walk, and certainly caught the wind today.  We found a sheltered spot in the sun for a break, before continuing to the road between Greatford and Carlby.

A few hundred yards along the road we were able to turn left on another footpath, just after Grange Farm. It looks as though the path should go diagonally over the field, but two sides of the triangle round the edge were much simpler. It passes south of Braceborough Wood, which is accessible to the public, then heads east over the fields to Braceborough, close to Spa Road.
Here we were tempted by free apples, and fell into conversation with the owner of the house. He recommended a couple of nearby walks, including one to the Bowthorpe Oak, which has to go on the "to see" list.
He also said that when the level crossing mentioned above is closed, there will be an alternative route for walkers. The Macmillan Way uses the route.
We followed one of his recommendations and extended our planned walk by another mile or two, by walking out of the village on Spa Road, as far as the old Station House, taking the drive to Spa Farm, and finding our way from there on to the disused railway - this is not an official public footpath, but makes a pleasant walk, once you've found your way down to the track.

We left the railway track at the road into Wilsthorpe, turning right past Gate house, Waterworks Farm and Coombe Farm Kennels, passing the road to Braceborough, walking as far as the church. There was an exhibition in the church, but we didn't visit it today.
Instead we went along the footpath opposite, to our right, which took us over fields, and across the East Glen River, then turned right along a farm track which took us back to Braceborough Church.